Twitter’s user base continues to grow at a double-digit rate and profitability is set to gradually improve this year, but can the social media platform keep up the momentum when it releases its latest set of quarterly results? We look at where Twitter shares could be headed.

Twitter will release its results for the first quarter of 2021 after the markets close on Thursday April 29.

The main focus of Twitter’s quarterly results, as always, will be on how fast its user base is growing and its ability to grow both its top and bottom lines.

The company ended 2020 with 192 million monetizable daily active users, up from 187 million at the end of September. While Twitter has continued to deliver double-digit growth in users, the rate of growth has been slowing down since the second quarter of 2020, when it reported 34% year-on-year growth. That declined to 29% in the third quarter and to 27% in the fourth.

Still, the social media platform said engagement improved as people discussed major events like the pandemic and the US election, while new product improvements resulted in higher retention and lower churn during the fourth quarter than expected.

Investors will want to see evidence that Twitter is keeping up momentum when it comes to attracting new users and that its new products, including the relaunch of how its ads on its app work, are helping drive growth in advertising revenue.

Twitter has said it expects revenue to grow at a faster pace than costs in 2021 as a whole and investors will be hoping to see early progress made in the first quarter.

Twitter’s guidance for the quarter is to deliver revenue of between $940 million and $1.04 billion and an operating loss of $50 million to breakeven. Analysts are expecting Twitter to hit the top end of its guidance range with revenue of $1.02 billion but are expecting losses at the bottom-line to widen from the year before.

Twitter share prices has been trading within a symmetrical triangle pattern, a pattern which represents a period of consolidation before a break out.  The RSI is showing a neutral bias and the 50 EMA is approximately flat,

Twitter’s earnings could be the catalyst to drive the break out. Upbeat earnings and guidance could see the share price push above 70, towards $73 the April high.

However, disappointing earnings or guidance could see the Twitter share price break below triangle and the 50 EMA at $65 before heading towards $60 the February 9 high. 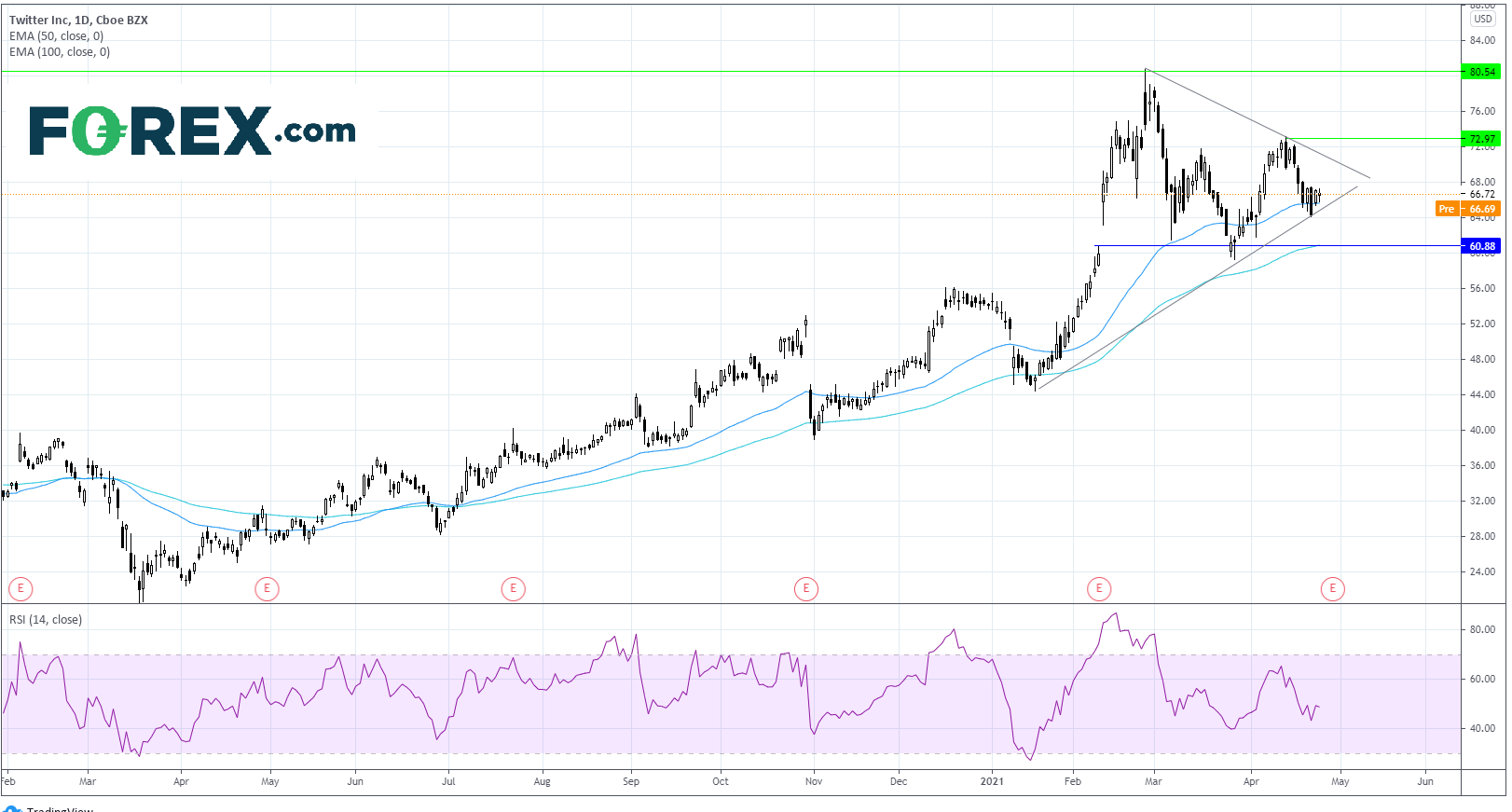