Will the UK and Australia follow in the same steps as the US and Canada?

On June 4th, both the US and Canada released their May jobs figures.  The US added 559,000 jobs to the economy vs an expectation of 650,000 and Canada lost 68,000 vs an estimate of -20,000.  Both weaker than expected.  This week both the UK and Australia release their respective jobs data. Will they follow in the same steps as the US and Canada, or will they outperform their peers and beat expectations?

On Tuesday, the UK will release its Claimant Count Change for May.  Current expectations are for a decrease of 62,000 claimants vs -15,100 in April.  This would be welcome news to the BOE as they have already begun their tapering process and hope that less claimants will mean a stronger economy.  At their last meeting, the BOE reduced their bond purchases (tapered) from 4.4 billion Pounds per week to 3.4 billion Pounds per week.  They meet again on June 24th.  The Claimant Count Change could affect  their decision! However, on Monday UK officials will decide whether to fully reopen its economy  on the scheduled date of June 21st or push it back due to recent variant cases of the coronavirus.  One should consider if the slight increase in cases was enough to hurt jobs data.

Everything you wanted to know about the Bank of England

On Thursday, Australia will release its Employment Change for May.  Current expectations are for an increase of 40,000 jobs vs -30,600 in April.  The split between full time jobs and part time jobs is equal, at 20,000 each.  In April , although the headline print was weak,  the losses were all part time jobs at -64,400.  33,800 full time jobs were added to the economy in April.  Traders should pay close attention to the breakdown between full time and part time jobs for Australia.  Melbourne restrictions have been lifted after 2 weeks of “stay at home” orders and vaccinations have been well behind most developed countries.  Although the lockdown was mostly in June, traders should consider whether the resurgence of the virus has caused a hiring slowdown in May. When the RBA last met on June 1st,  they maintained their guidance that highly supportive monetary conditions would be necessary until at least 2024.

GBP/AUD has been in a large, well defined range since May 2020 between 1.7416 and 1.8527, after moving lower from the pandemic highs in March 2020.  Although price broke above a symmetrical triangle (within the range), it has failed to break above the range.  In addition, it has yet to trade above the 38.2% Fibonacci retracement from the March 2020 highs to the January 6th lows of 1.8650. 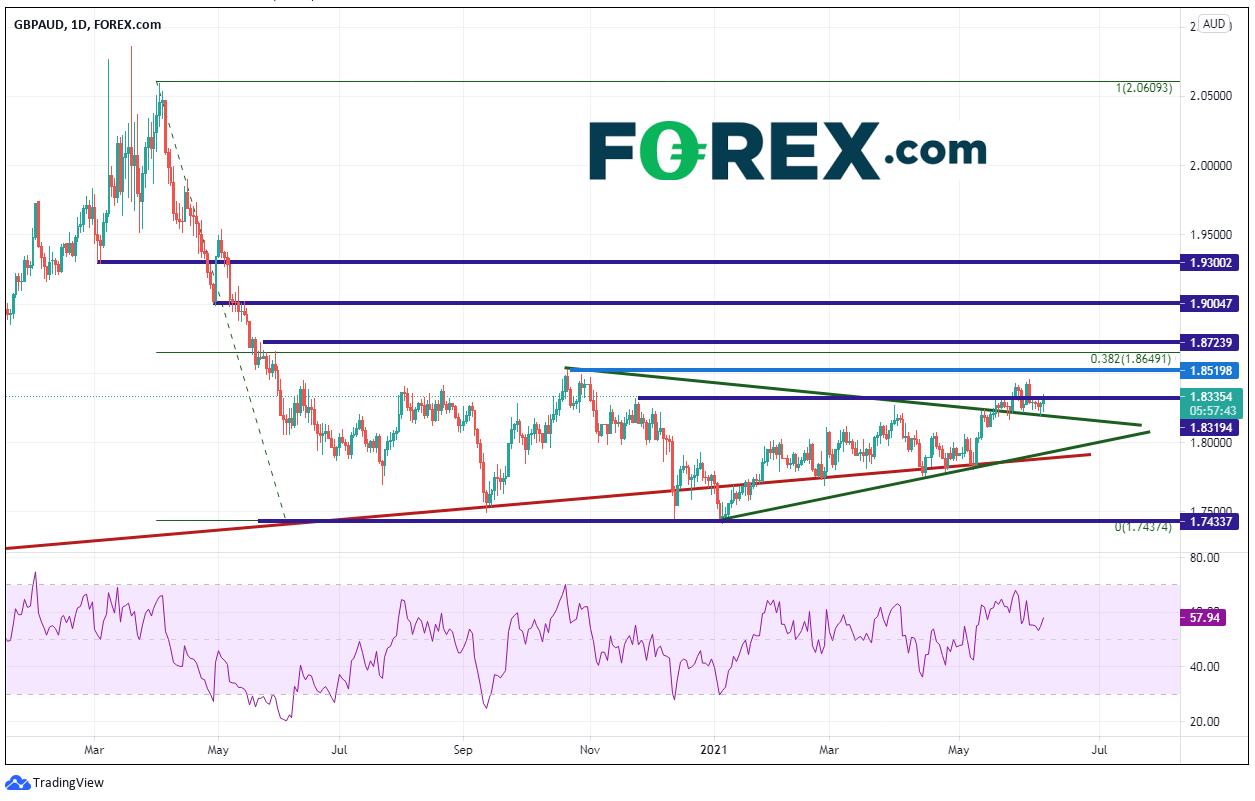 If we focus on a shorter 240-minute timeframe,  we can see that GBP/AUD broke above the top downward sloping trendline of the above-mentioned triangle (green) and came back to test it several times.  The current trading range on this timeframe is between 1.8169 and 1.8452, where it has been trading over course of the last month.  Immediate horizontal resistance above is at 1.8372 and then at 1.8452.  If price breaks through the range, the next resistance is at the triangle peak near 1.8527.  First support at the downward sloping trendline of the triangle (green) near 1.8200 and then horizontal support at 1.8168 and 1.8105. 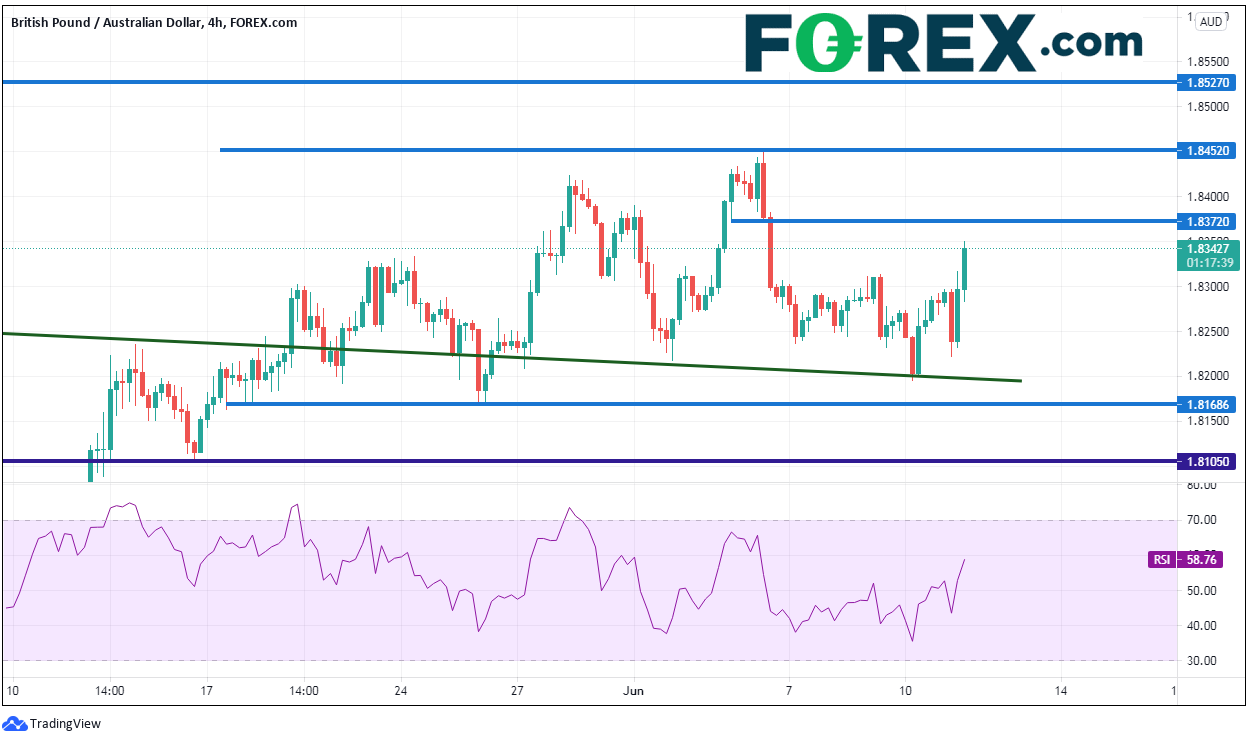 GBP/AUD has been in search of a catalyst to push it out of its range for not only the past month (240-minute chart), but for the last year (daily chart).  With jobs data out of both the UK and Australia next week, one must consider that one or both events could be the catalyst.  Throw in a tapering BOE, and the pair could be out of its ranges in a short period of time!