US and Canadian Data Put Central Banks on High(er) Alert

Retail Sales from the US and CPI from Canada were released, and both were big misses.

Retail Sales out of the US and CPI out of Canada were released earlier today, and both were big misses.

Question: Who do most economists say is the driver’s seat of the US economy?

Answer: The US Consumer

“Don’t bet against the US consumer” is another adage the is often thrown around.

US Retail Sales for September were released, and the results were not pretty for the US Economy.  The headline number (MoM) was -0.3% vs 0.3% expected, with an upward revision from 0.4% to 0.6%.   Although the revision to August number was higher,  it still nets a big miss.   This is the first time Retail Sales has fallen in seven months.  Core Retail Sales (excluding autos) was just as bad, with a (MoM) reading for September of -0.1% vs 0.2% expected.   This may be one of the first signs that the US consumer is concerned about the poor manufacturing data and the modest jobs data.  With the US-China trade deal still ongoing, consumers may be concerned about a pinch in their pocketbooks when and if tariffs are introduced.   The Retail Sales data just adds another piece of negative data that the FOMC must consider at their next meeting.  According to the CME’s FedWatch Tool, the market is currently pricing in an 88% chance of a rate cut of 25bps on October 30th.

CPI for September from Canada was also released this earlier.  CPI (MoM) was -0.4% vs -0.2% expected.  Although Core CPI (excluding food and energy) for September (MoM) was in line with expectations at 0%, this still is a net negative for the Canadian economy, as inflation data last month was bad as well.  Although employment data was good for Canada for September, the BOC must deal with weaker retail sales (last reading was from August) and continued lower inflation.

USD/CAD was violently unchanged after the data from both countries was released at the same time.  As we discussed last week with the employment data, let’s review where price currently is trading in the longer-term picture.  On a daily,  price is still coiling in the apex of the longer-term triangle.  A break above 1.3400 or below 1.3150 should provide a longer-term direction, however 1.3150 is well supported.  Bulls will look to get long near this level and look for a move towards the top of the triangle. 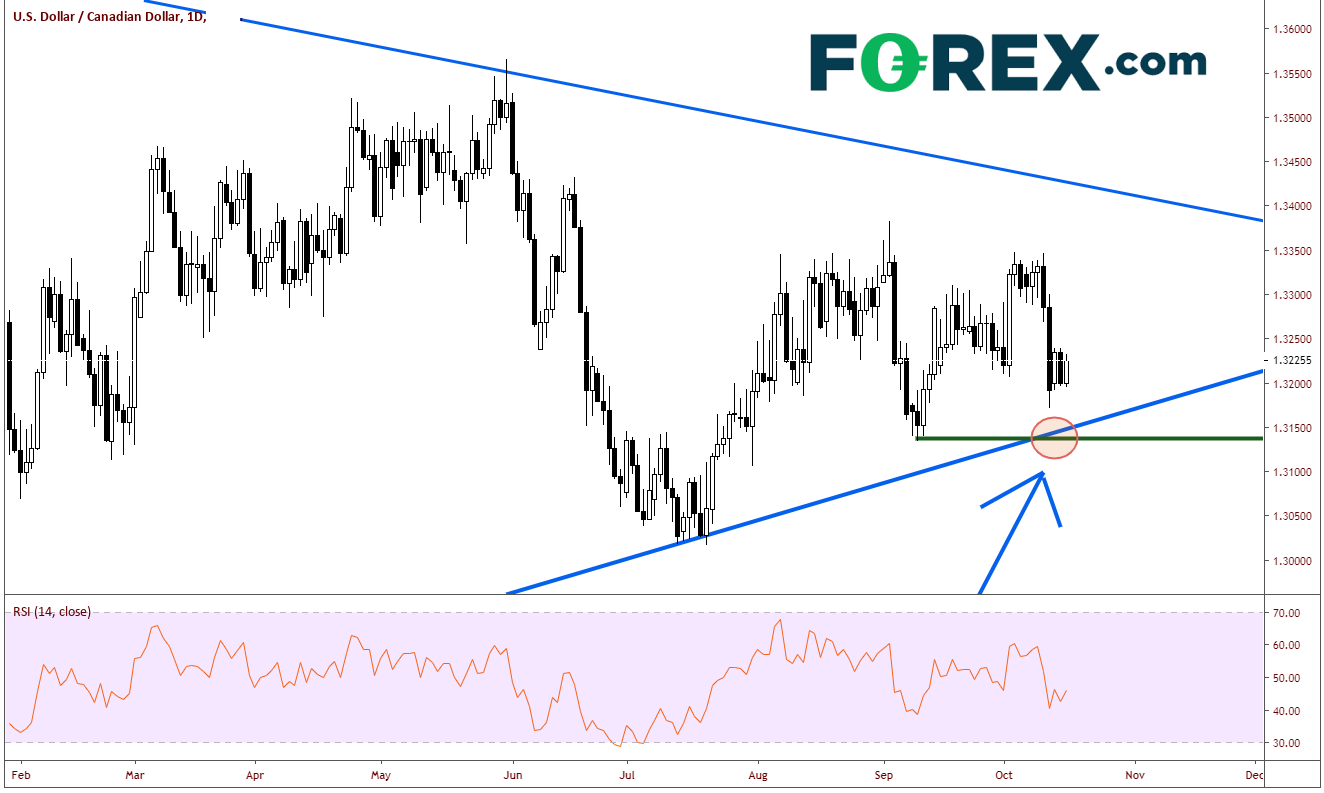 After failing at the 1.3350 level on numerous occasions,  USD/CAD recently broke below a rising trendline on a 240-minute timeframe.  The trendline now acts as resistance and comes across near 1.3250.  Bears may look to sell against this trendline.