US dollar at crossroads ahead of key economic releases

While last week’s highly disappointing US non-farm payrolls release was generally discounted by the markets due to the expected impact of two hurricanes that negatively affected US job growth in September, greater-than-expected wage growth and a lower unemployment rate were significant bright spots in the data. With respect to wage growth, a key indicator of inflation, average hourly earnings jumped up +0.5% in September against both a prior consensus forecast of +0.3% as well as the previous month’s +0.2% revised reading. This surprisingly elevated wage growth data is likely to play a role in boosting the prospects for a December interest rate hike by the Federal Reserve. The current week features more US economic releases that will also play a key role in helping to set the tone for both Fed policy and the US dollar going forward.

Wednesday brings the release of minutes from the September FOMC meeting, in which interest rates were kept unchanged as expected, but where the Fed struck a relatively hawkish tone with respect to future monetary policy. The actual extent of this hawkishness will be further clarified on Wednesday’s release of the FOMC meeting minutes. Thursday of this week brings the US Producer Price Index, a key inflation indicator, for September. The current consensus forecast is for a +0.4% rise in producer prices after the previous month’s relatively tepid +0.2% rise. On Friday, both the US Consumer Price Index (CPI) and US retail sales data for September will be released. The CPI, a primary inflation gauge, is expected to have risen by a very substantial +0.6% after the previous month’s +0.4%, while the core CPI (excluding food and energy) is expected to have remained steady at +0.2%. Finally, US retail sales is expected to have jumped in September by +1.5% after the previous month’s poor -0.2% showing, while core retail sales (excluding automobiles) is also expected to have jumped – by +0.9%.

Although the US dollar was modestly down on Monday in the aftermath of Friday’s US jobs report and ahead of this week’s key economic releases, the greenback remained relatively well-supported as expectations of a Fed rate hike in December remained heightened. For more than a month since early September, the US dollar index, an instrument comparing the dollar to a basket of other major currencies, has been recovering in a sharp incline from multi-year lows. This relief rally has brought the index from a low around 91.00 up to its current position just short of the key 94.00 resistance level. This 94.00-area also served as major resistance back in mid-August. Amid this week’s key US economic releases, if the dollar is able to breakout above this 94.00 resistance level on increasing Fed expectations, the dollar index will likely extend its recent run, with the next key upside target around the 95.50 resistance level. 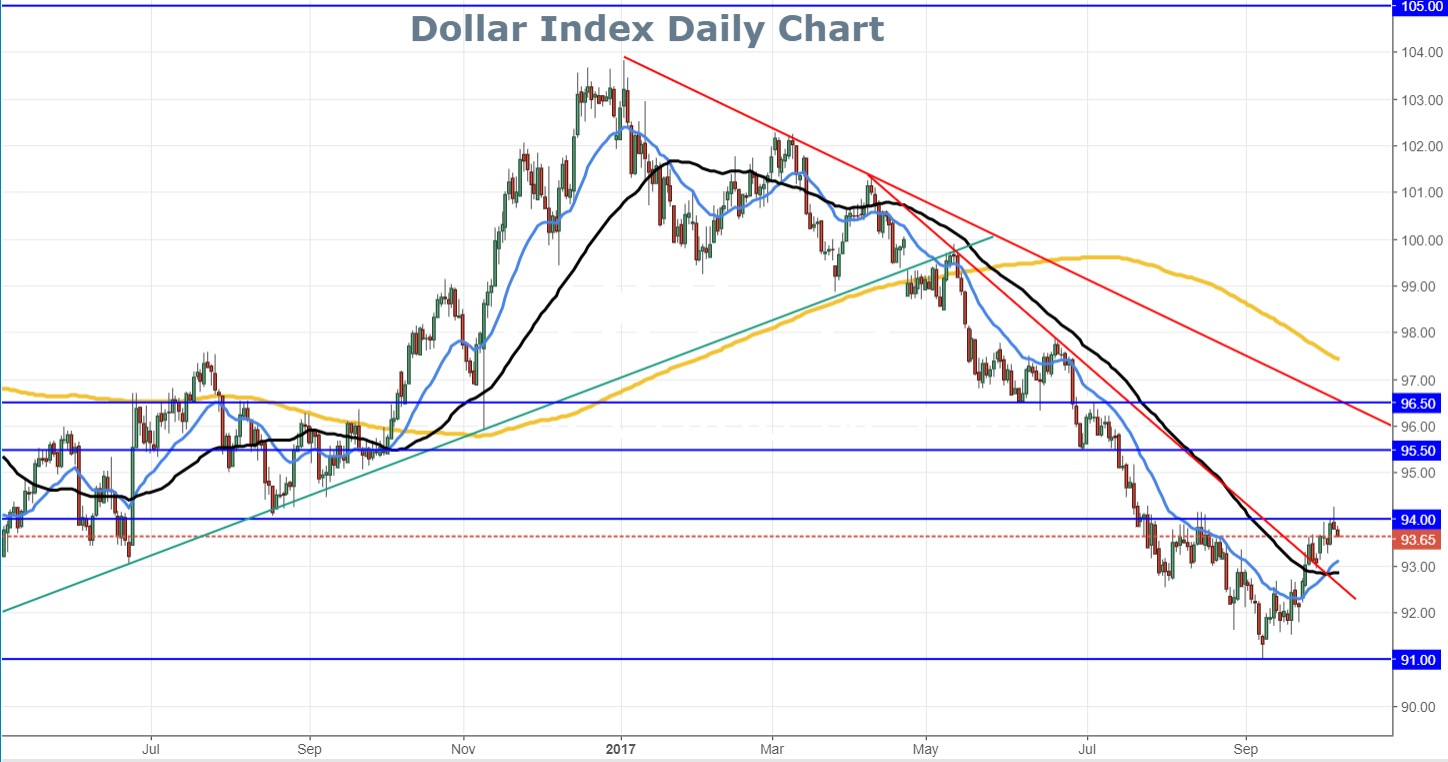