The proximate cause for the buck’s weakness is good news overseas: specifically, the EU countries reached an agreement on migration, while the UK’s Q1 GDP was revised up by 10 basis points to 0.2% quarter-over-quarter. Talk that US President Trump is considering pulling out of the World Trade Organization (in contrast to the cooperative headlines out of Europe) may also be contributing the bearish sentiment on the greenback.

Technically speaking, the US dollar index remains within its clear uptrend that has taken the index from around 89.00 in mid-April to a high near 95.50 yesterday. Some US dollar bears have noted that yesterday’s peak coincides, to the pip, with the high from last week and posited that this could mark a potential “double top” pattern for the buck: 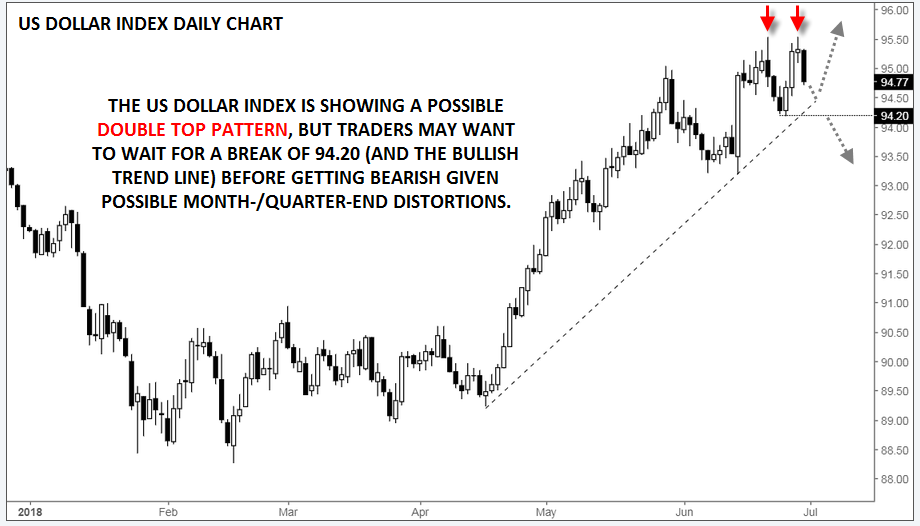 While we agree this could ultimately prove to be a double top pattern, bulls may want to avoid flipping their outlook on the world’s reserve currency just yet. For one, the pattern won’t be confirmed until and unless rates break below the “neckline” (or the trough between to the two highs) at 94.20; until that time, traders may prefer to place more weight on the dollar’s established bullish trend.

More importantly, today marks the end of the second quarter, and quarter-end is a time when wonky things happen in the FX market. Because most global portfolio managers report performance as of the end of the quarter, they often use the last couple days of the quarter to rebalance their existing exposures and currency hedges.

If the value of one country’s equity and bond markets increases, these money managers typically look to sell or hedge their elevated risk in that country’s currency and rebalance their exposure back to an underperforming country’s currency. The more severe the change in a country’s asset valuations, the more likely portfolio managers are either under- or over-exposed to certain currencies.

Put simply, if US stock and bond markets outperform their European counterparts over a three-month period (as they have this quarter), large global investors end up with more exposure to the US dollar by default. Therefore, they may look to sell or hedge the US dollar to bring their currency exposure back to their target weights. Seen from this perspective, it would be strange if we weren’t seeing a dip in the dollar heading into the end of the quarter.

It’s also worth noting that the US Independence Day holiday is next Wednesday, so many US traders will be away from their desks throughout next week. With liquidity at a low ebb, the dollar could see inconsistent price action (either larger-than-usual volatility if there are any market-moving economic developments or, more likely, slower trade than usual if there’s nothing to shake things up).

As you can see, market conditions for the US dollar are a bit abnormal (and likely will continue to be in the next week), so traders should exercise more caution than usual when interpreting the price action in the world’s reserve currency.