The US dollar rebounded modestly on Tuesday after nearly a week of mostly downside, but pressures on the greenback and its well-entrenched bearish trend remain intact.

The US dollar rebounded modestly on Tuesday after nearly a week of mostly downside, but pressures on the greenback and its well-entrenched bearish trend remain intact. Even in the midst of high expectations for further monetary policy tightening from the Federal Reserve after the central bank’s recent March rate hike, US political pressures and global trade uncertainties have continued to weigh on the dollar. Relative strength in rival currencies, including both the euro and Japanese yen, have also helped to keep the dollar pressured.

Though the Fed’s policy statement last week forecasted higher economic growth and interest rates going forward, its tepid outlook for inflation along with its unchanged median estimate of only three rate hikes in 2018 (inclusive of the priced-in March hike) precluded the dollar from rallying out of its prolonged slump.

Exacerbating the dollar’s continued decline have been recent political pressures emanating from the White House, which have most notably included President Trump’s hawkish stance on imposing substantial US import tariffs. Markets have feared that these tariffs may invite retaliation that could escalate into an eventual trade war. This week, those fears have moderately abated as foreign governments, most notably China, have expressed interest in negotiating with the US to help avert a full-blown trade war. However, negotiations will likely be in process for some time, and trade tensions could readily resurface at any time.

Another factor that could also drive the dollar is US GDP (q/q) data for Q4 2017 to be released on Wednesday morning. Consensus expectations are pointing at 2.7% annualized growth. This reading could have a considerable impact on the dollar if there is a deviation from expectations, especially given the Fed’s recent upgrade of growth projections.

From a technical perspective, the US dollar index is currently trading not far off its 88.50-area long-term lows. After falling from 91.00-area resistance in early March, the index attempted a push above its descending 50-day moving average, but was unable to sustain upside momentum and has since dropped back below the average. With bearish sentiment and downside pressure likely to continue, barring any substantially positive news or data, the dollar could have significantly further to fall. The next target immediately to the downside is around the noted 88.50-area support that represents the recent multi-year lows. With any further breakdown and extension of the long-term bearish trend, a lower downside target is around the 87.00 level. 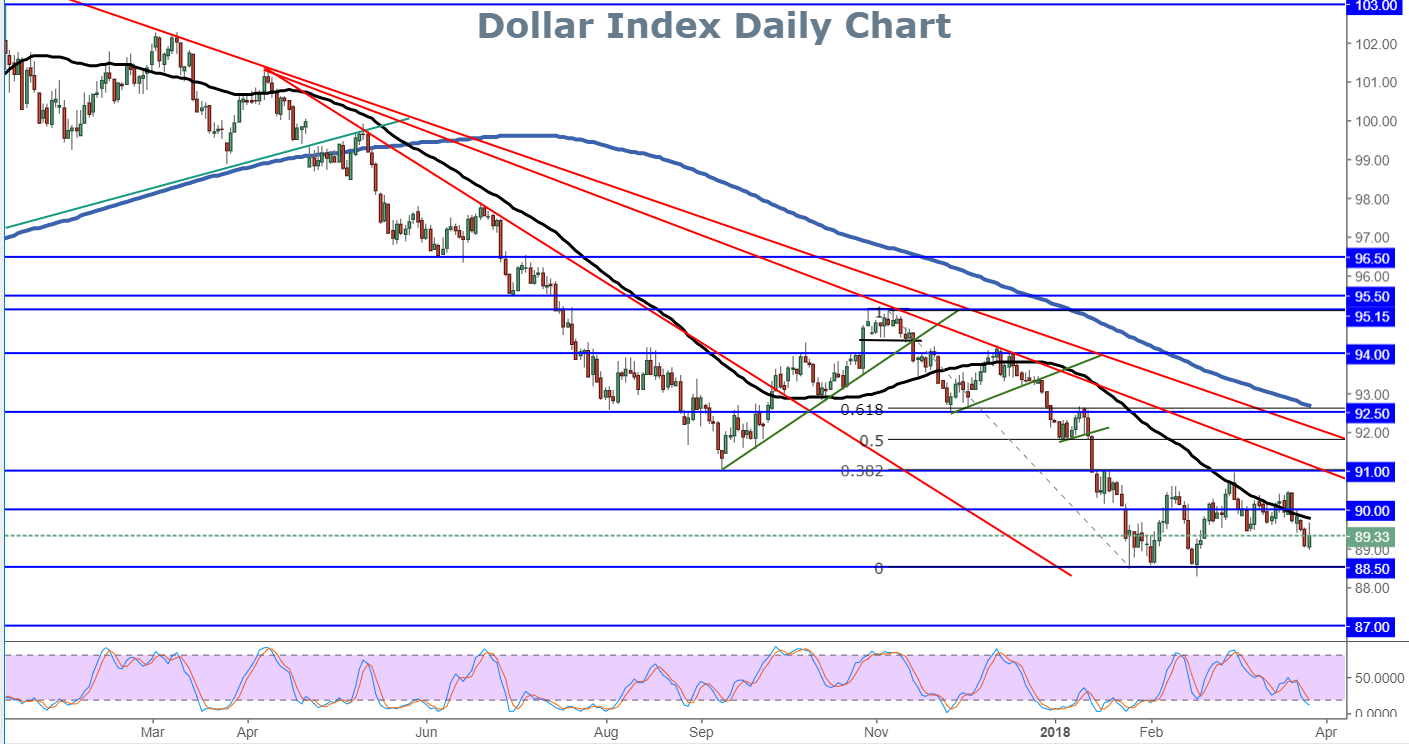