US Dollar soars on Russian invasion

Look for the technical levels to see where price may pause or even reverse!

The US Dollar took to flight as Russia moved swiftly and aggressively into Ukraine.  The US Dollar is looked at as a safe haven currency, as many investors believe that the US government will support the dollar under any circumstances.  (The Japanese Yen and Gold are other safe havens.) As the US Dollar moves higher, many of its counter currencies are moving lower.  Below are a few of the big movers today and levels where price may pause or even reverse.

EUR/USD has been moving lower since the potential invasion was first announced on February 11th.  The pair was trading above 1.1400 in that day.  Yesterday, we pointed out the long upper wicks on the daily timeframe, which indicated that buyers were in early in the session, only to be overtaken by sellers later in the day.  This was an indication that prices may move lower.  EUR/USD sliced though November 24th lows at 1.1186 and is closing in on the January 28th los of 1.1121. Below there is long term horizontal support at 1.1020. The bottom trendline of the channel currently in crosses near 1.0950. (Note that often when there is a false breakout above the channel, as we saw earlier this month, price will often move to test the other side of the channel). 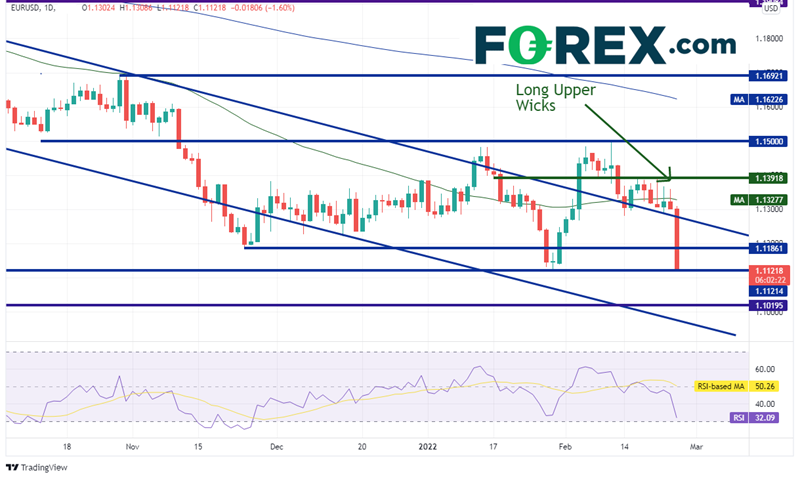 Except for a three-day period in mid-January, GBP/USD has been trading below a trendline dating to July 30th, 2021.  Today, price is down over 200 pips as the pair sliced through the 50 Day Moving Average at 1.3513 and the 61.8% Fibonacci retracement from the December 8th, 2021 lows to the January 13th highs. GBP/USD is currently sitting below the January 27th lows at 1.3357.  With such a big move on the day, one must consider that the pair may be ready for a bounce (at least short term).  Horizontal support is at 1.3278 and then the December 8th lows of 1.3160.  If price breaks below there, it can easily fall to the psychological round number resistance of 1.3000. 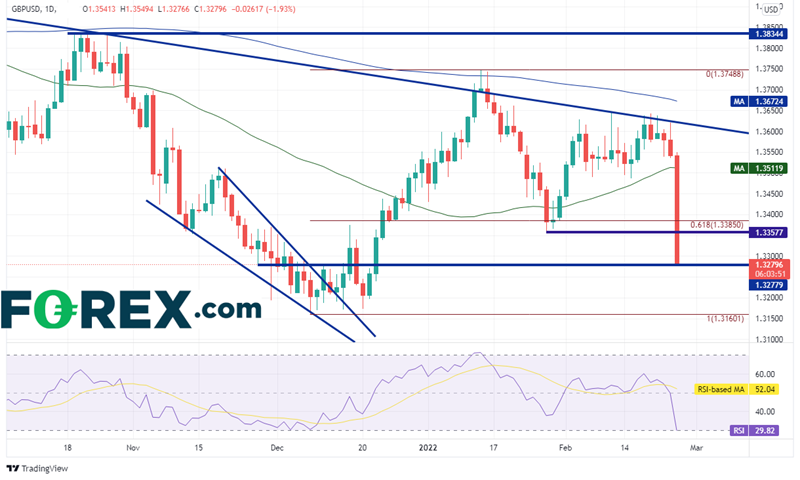 USD/CAD is following the US Dollar higher.  As we wrote about last week, with the price of crude moving higher, USD/CAD should have been moving lower.  But it wasn’t!  Therefore, it could follow the DXY higher.  This is what happened today.  Now, what happens when Crude Oil moves lower?  What happens if the BOC is less hawkish than expected next week?  The pair could move even higher!  Resistance isn’t until 1.2963, which is the highs from December 20th, 2021.  Above there, 1.2990 and 1.3122 are both long-term horizontal resistance levels. 
With Russia invading Ukraine on a massive scale today, the US Dollar went bid as traders moved into the safe haven currency.  However, there must be an area where price has moved too far, too fast, in some of the US Dollar pairs.  Look for the technical levels to see where price may pause or even reverse!