US Dollar volatility (aided by Powell) ahead of Biden’s stimulus: DXY, USD/CAD, USD/JPY

The US Dollar Index began the day moving higher; however, it has reversed sharply.

President-elect Joe Biden will be sworn in on Wednesday as the 46th President of the United States.  However, later today he will present his economic stimulus package to help troubled Americans deal with effects of the coronavirus.  The plan is said to be in the $1.5-$2 trillion area, with a focus on distributing vaccines and increasing stimulus checks to $1,400 per person.  The US Dollar Index began the day moving higher; however, it has reversed sharply.  Fed Chairman Powell’s dovish remarks that the time to raise interest rates was “no time soon” also encouraged the US Dollar to push lower.

As mentioned, the US Dollar index began the day near 90.27 and pushed as high as 90.57 midway through the US morning session.  The index reversed entering the UK fix and traded as low as 90.16. Later, on Powell’s comments, the index traded down to 90.07!   Yesterday, on a 240-minute timeframe, the DXY appeared to be heading higher out of a flag pattern. However, with today’s volatile price action, the DXY may have made a false breakout above the flag.  Of course, nothing moves in a straight line, but if price closes below 90.19, it would invalidate the flag patten and DXY could make another push lower towards the psychological  90.00, where bulls will be looking to reenter longs.    Today’s highs of 90.57 acts as resistance. 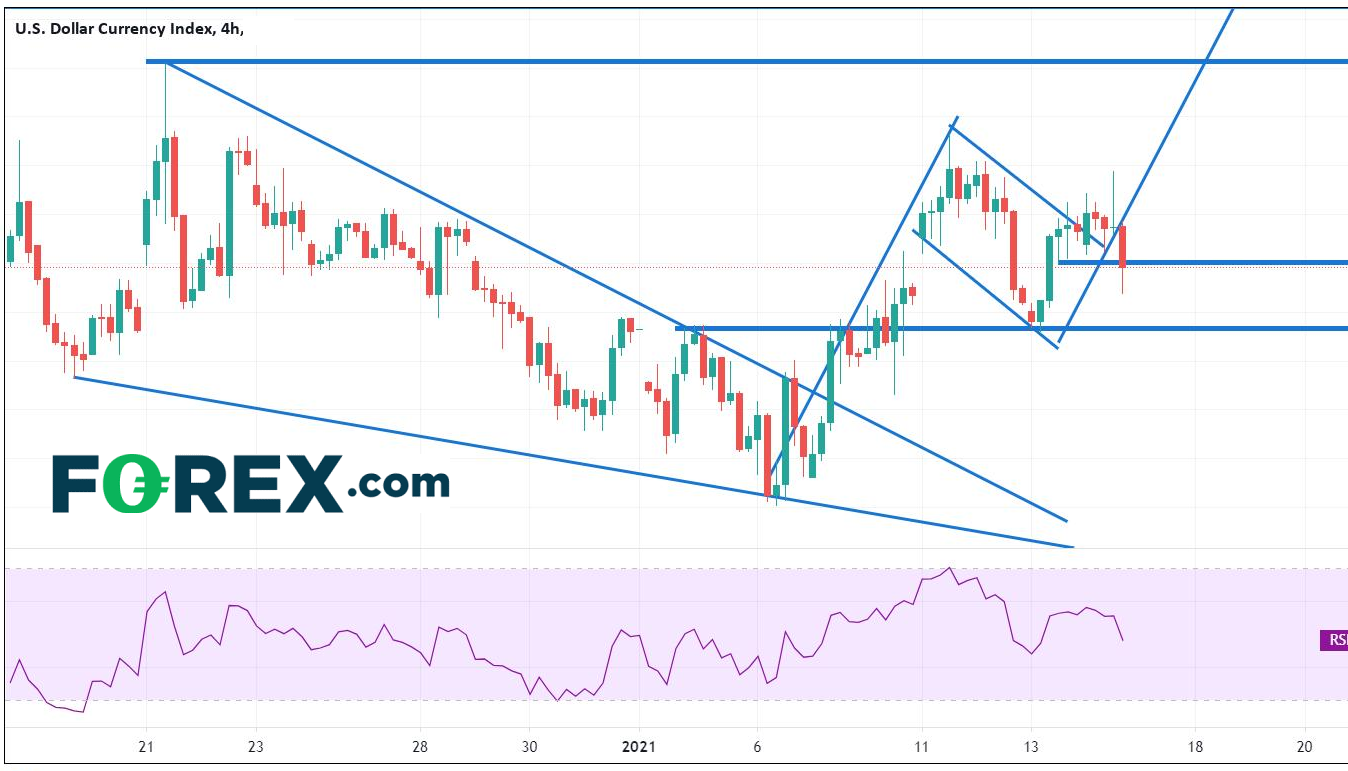 USD/CAD seemed to be a bit ahead of the DXY selloff from the highs, as the pair started moving lower roughly 45 minutes prior.  However, USD/CAD has been in a downward sloping channel since late October 2020 and continues to push lower.  After a false breakout above the top of the channel on January 11th to the 61.8% Fibonacci retracement level from the December 21st, 2020 highs to the January 6th lows, the pair continued lower and is currently tested the January 6th lows near 1.2634.  A break lower would suggest a move down to trendline support (red line) near 1.2605.  Below there, USD/CAD has room to run to the bottom line of the channel near 1.2400!  Resistance above is at today’s highs near 1.2700, where bears will be looking to reenter shorts.

USD/JPY traditionally has traded with SPX 500.  However, as you can see from the correlation below, USD/JPY has been trading more in line with DXY as of late.  The correlation coefficient is +0.83 between the 2 assets.  A correlation coefficient of +1.00 means the 2 assets move in perfectly together.  +0.83 is strong correlation coefficient.  On a 240-minute timeframe, the pair has been in a descending wedge since mid-November 2020 but broke above the downward sloping trendline on January 7th.   Price traded lower with the DXY today, from a high of 104.20 down to 103.56, just ahead of horizontal support. If USD/JPY moves lower, it will test support at the downward sloping trendline and could prove a false breakout.  If the DXY and USD/JPY recover and trade above recent highs at 104.39, the pair could test resistance at 104.75. 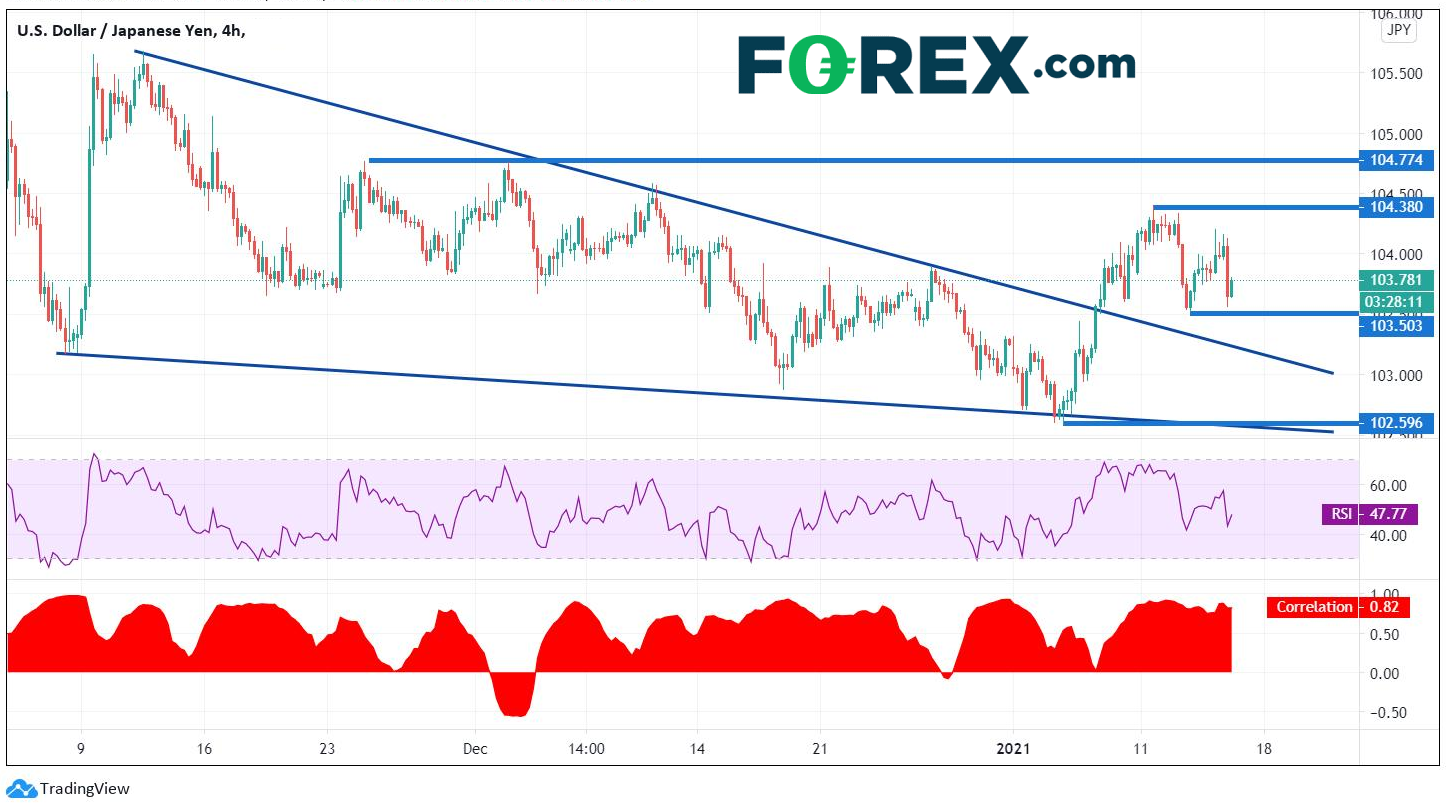 With Powell’s dovish comments out of the way, the markets will turn its attention to Biden’s economic stimulus tonight.  Longer-term, DXY has been moving lower.  However, be mindful that the stimulus release tonight could end up being a “sell the rumor, buy the fact” in the long run. Watch for more volatility to come!