When it comes to currencies, the highly-touted “Trump Trade” has revolved largely around the Mexican peso. It has been no secret that US Presidential Candidate Donald Trump’s heavily protectionist trade policies, not to mention his stance on immigration, have targeted Mexico in particular. Besides proposing to build a wall between the US and Mexico, Trump has also repeatedly expressed his staunch opposition to the North American Free Trade Agreement (NAFTA) and has proposed broad restrictions on both Chinese and Mexican imports. The result has been increasing speculation that if Trump is seen to win the presidency, the Mexican peso could suffer dramatically against the US dollar.

When it comes to currencies, the highly-touted “Trump Trade” has revolved largely around the Mexican peso. It has been no secret that US Presidential Candidate Donald Trump’s heavily protectionist trade policies, not to mention his stance on immigration, have targeted Mexico in particular. Besides proposing to build a wall between the US and Mexico, Trump has also repeatedly expressed his staunch opposition to the North American Free Trade Agreement (NAFTA) and has proposed broad restrictions on both Chinese and Mexican imports. The result has been increasing speculation that if Trump is seen to win the presidency, the Mexican peso could suffer dramatically against the US dollar.

Although there was no substantive discussion during Sunday’s presidential debate between Hillary Clinton and Trump regarding policies towards Mexico, it has been well understood that the Mexican peso currently has a high positive correlation with Clinton and an inverse correlation with Trump. This should continue to be the case at least until the election occurs in early November.

As it currently stands, Sunday’s debate showed that Trump fared better than he did at the first debate, but the verdict overall was still mixed-to-negative for Trump. Both Trump and Clinton were able to make some effective attacks, but both also showed some very vulnerable weak points – most notably, Trump’s “locker room talk” and admission of not paying federal taxes for years, and Clinton’s email server scandal. Overall, there was no clear winner as there had been at the previous debate, and it was unlikely that Sunday’s debate itself made any substantial impact on either candidate’s support base. Prior to the debate, however, Trump had already been losing ground both with Republican officials as well as some of his previous supporters due to his past statements about women. Generally, Trump’s performance in Sunday’s debate was unable to mitigate the damage that had already been done.

As a result, as the outsider (Trump) is viewed by many to be falling progressively further behind the status quo candidate (Clinton), the Mexican peso has done some tentative celebrating, pushing the USD/MXN to plunge further from September’s all-time high around 19.90. The currency pair’s sharp fall (and the peso’s rise) within the past two weeks since late September has correlated roughly with Trump’s progressively more troubled campaign, and has occurred during the same period of time that the US dollar itself has actually been strengthening.

If the downward trend of Trump’s campaign continues in the run-up to the election, the peso could see significantly further strength against the dollar, pressuring the USD/MXN currency pair even more. Currently fluctuating right at a key support area around the 18.90 level and a short-term uptrend line, USD/MXN is on the verge of a potential support breakdown. With any such breakdown on further woes for Trump’s campaign, the next major support target for USD/MXN is at the 18.00 psychological support level. 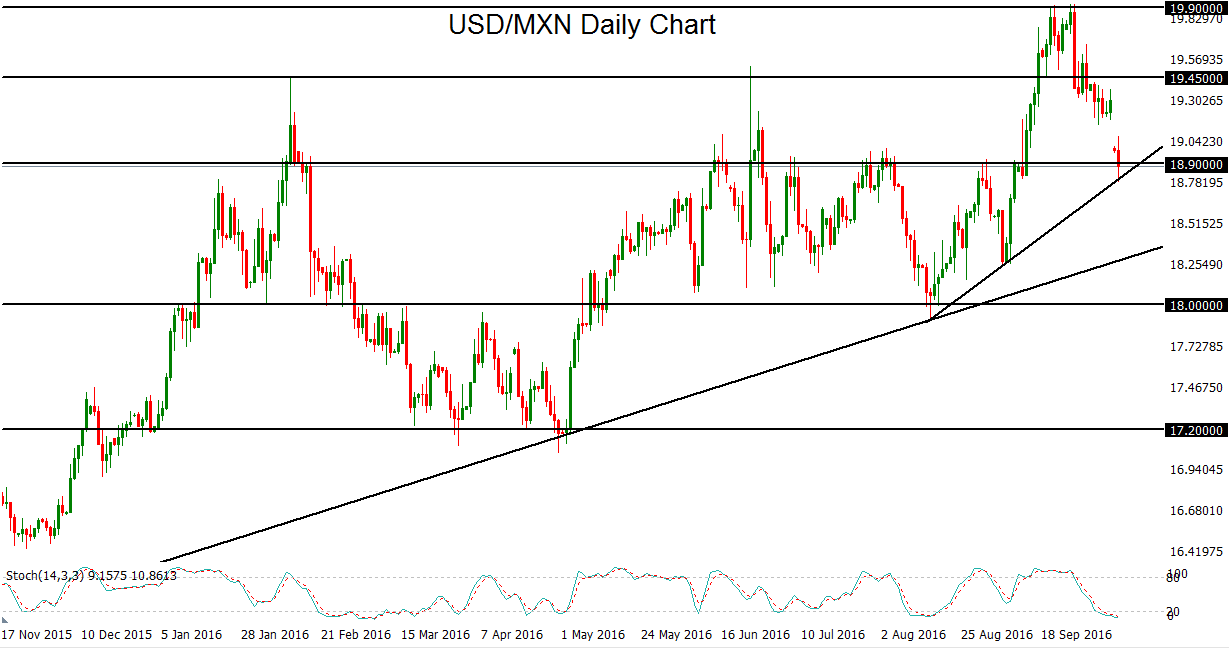