Most analysts seem to agree with the markets that a victory for Hillary Clinton in the US presidential race is good news for the dollar, stocks and risk assets in general. Indeed, the fact that both the dollar and index futures gapped sharply higher overnight in reaction to news that the FBI has cleared the Democratic candidate of any criminal wrongdoing regarding the email server issue, reaffirms this view. This is a very risky assumption to make however.

Most analysts seem to agree with the markets that a victory for Hillary Clinton in the US presidential race is good news for the dollar, stocks and risk assets in general. Indeed, the fact that both the dollar and index futures gapped sharply higher overnight in reaction to news that the FBI has cleared the Democratic candidate of any criminal wrongdoing regarding the email server issue, reaffirms this view.

This is a very risky assumption to make however. Granted, the dollar and stocks could easily rise further if Clinton does win the elections, but that doesn’t necessarily mean their positive relationship will be maintained for a sustainable period of time. After all, an appreciating dollar is surely bad news for US exports and company earnings.

An even riskier assumption to make here is to convince ourselves of a Clinton victory now that she’s in the clear with regards to her email issues. The opinion polls are still very tight and a lot of people will have made up their minds already, regardless of the FBI probe. So a win for Donald Trump is still a big risk which may be under-priced.

Thus, I wouldn’t be surprised if we were to see the stock market and dollar gains evaporate later on today or by tomorrow ahead of the outcome of the elections. Sure, there is a good possibility that this won’t happen, but the key point I am trying to make here is this: don’t assume anything; be prepared, flexible and nimble in the coming days.

Indeed, the chart of the S&P 500 future shows that despite the big gap higher, the bulls are still not out of the woods just yet. If anything, they are bang in the middle of a bear territory between 2107 and 2119, an area which has been key support and resistance in the past. The index could very easily turn lower from here once the cash boys on Wall Street return to their desks. Undoubtedly many bullish speculators were caught underwater following last week’s sell-off and today’s bounce could provide a quick escape opportunity to unload those long positions at a minimal profit or loss. In other words, this could just prove to be an oversold bounce (as indicated by the RSI moving away from 30).

But the fact that the 21-day exponential moving average is below the 50-day simple average, which is now also pointing lower, this clearly points to caution. What’s more, the bearish channel is still in place.

Only when the index starts to move out of its bear channel and above the next key resistance at 2142 can we then become more optimistic about the prospects of a big rally. Either that, or unless a major reversal pattern unfolds at lower levels first. But until and unless these conditions are met, you can assume that the bears remain in control. 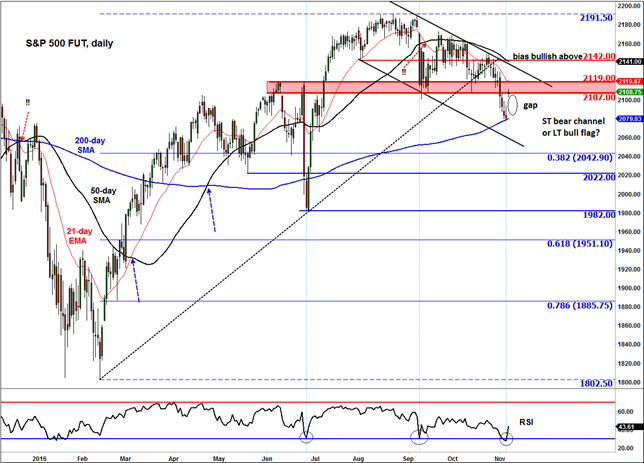