US inflation could revive King Dollar

It has been a “Super Tuesday” for CPI inflation data. Two down, one to go: New Zealand and Britain both delivered stronger-than-expected inflation figures and now the focus turns to the world’s largest economy. US headline September CPI is seen rising 0.3% month-over-month or 1.5% year-over-year, while core CPI is expected to come in at 0.2% m/m and 2.3% y/y.

It has been a “Super Tuesday” for CPI inflation data. Two down, one to go: New Zealand and Britain both delivered stronger-than-expected inflation figures and now the focus turns to the world’s largest economy. US headline September CPI is seen rising 0.3% month-over-month or 1.5% year-over-year, while core CPI is expected to come in at 0.2% m/m and 2.3% y/y. If confirmed or bettered, the US dollar could rebound strongly, while more weakness is likely if the data turns out to be softer. The inflation numbers are due for release at 13:30 BST or 08:30 ET. Overnight, New Zealand’s quarterly CPI came in at +0.2% when a flat reading was expected to be seen. This sent the New Zealand dollar soaring higher. In Britain, the latest inflation data was likewise stronger-than-expected as the headline annual rate of CPI accelerated to 1% last month to its highest level since November 2014, thanks mainly to a weaker pound. Unlike the kiwi, the reaction of sterling was somewhat muted although the latter did find some support as we approached midday in Europe to trade for a time above 1.23 against the dollar.

With US CPI being so close to the Fed’s 2.0% target and employment near its natural rate, you would think the Fed will be seriously considering to start its hiking cycle in order to avoid overcooking inflation. Yet recent comments from Fed’s chair and vice-chair both suggest the central bank wants to tighten its belt as slowly and loosely as possible. To be fair, the Fed’s tolerance to a period of higher inflation makes sense. After all, there still remains some spare capacity in the US economy. What’s more, central banks elsewhere will likely maintain their extraordinary accommodative policy stances in place for some time yet. Clearly, the Fed does not want to accelerate the appreciation of the US dollar by sending out more hawkish signals than is necessarily.

But try as it might, the bullish fundamental outlook for the US dollar means the currency is likely headed higher as I believe the Fed will ultimately have to raise interest rates in the near future as the world’s largest economy improves further. So, the dollar’s weakness observed at the start of this week is likely to be short-lived, in my opinion. Indeed, a strong set of inflation figures today, if seen, could tip the balance back in the bulls’ favour.

Meanwhile in New Zealand, the slightly stronger inflation data may have lowered the probability that we will see a rate cut from the RBNZ, but I don’t think the data was a game changer. The Reserve Bank of New Zealand has recently turned dovish once again, and unless we see a marked improvement in domestic data there, further rate cuts look inevitable. Today’s key data from the New Zealand dollar is Fonterra’s GDT Price Index, which measures the change in the average price of dairy products sold at the auction.

Among the USD pairs, the NZD/USD also looks among the most interesting one to me from a technical perspective as it tests a critical resistance zone in the 0.7200-25 area. As can be seen from the main 4-hour chart and the weekly time frame in the inset, this area represent the previous support and the low from the last weekly up candlestick prior to the move lower. In addition, the 61.8% Fibonacci retracement from the prior swing high of 0.7310 meets the resistance trend of a bearish channel here. Thus for all these technical factors, I am expecting the Kiwi to potentially resume its downward trend from around this 0.7200-25 area, give or take a few pips. Only a decisive break above the upper end of this range i.e. 0.7225 would invalidate this bearish outlook. 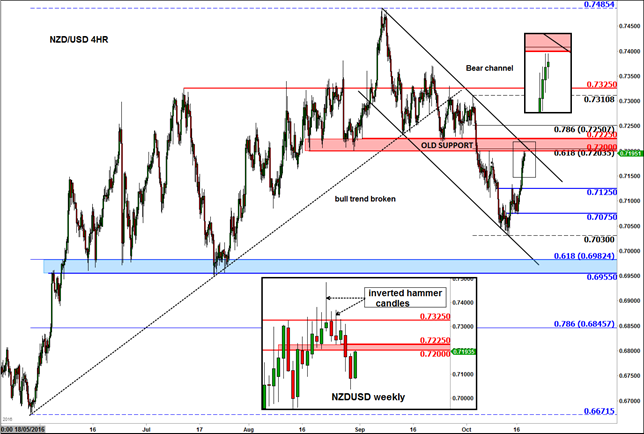