In addition, rising concerns about Deutsche Bank continue to undermine the financial sector across Europe. Here, the equity markets turned lower after a slightly firmer open with the DAX dropping 1%. US index futures have also given up a big chunk of their earlier gains and now point to a flat open on Wall Street.

Added to these concerns, hopes that a deal among oil producers to freeze their output is fading fast. Both Iran and Saudi oil ministers have suggested that this week’s discussions in Algeria were aimed at building consensus for a deal which could potentially be signed later on in the year. Iran is pushing for more market share as it tries to reach its pre-sanction levels while Saudi is willing to cut its output now, knowing that it has probably reached peak capacity and ahead of lower seasonal demand in the final months of the year.

Despite today’s sell-off in the stock markets amid the above-mentioned concerns, gold is struggling to find much safe haven demand. The yellow precious metal is obviously let down by a small rebound in the dollar which has gained ground against the euro, Swiss franc and the Canadian dollar.

Nevertheless, the bullish trend remains intact for gold. At the time of this writing, the metal was hovering around its 50-day moving average and short-term support near $1332. From here, gold could obviously bounce back to test the short-term bearish trend line again, or alternatively drop to the rising trend line once again. A potential test and break of the short-term bearish trend line around the $1343 area could pave the way for a rally towards the top of the recent range at $1375 and potentially beyond. Conversely, a potential break below the rising trend line could lead to a significant sell-off. Traders may therefore wish to keep their stops relatively tight as they don’t want to get caught offside in a potentially sharp move. Alternatively, they may wish to wait for gold to make a move before opening a position in the direction of the breakout. 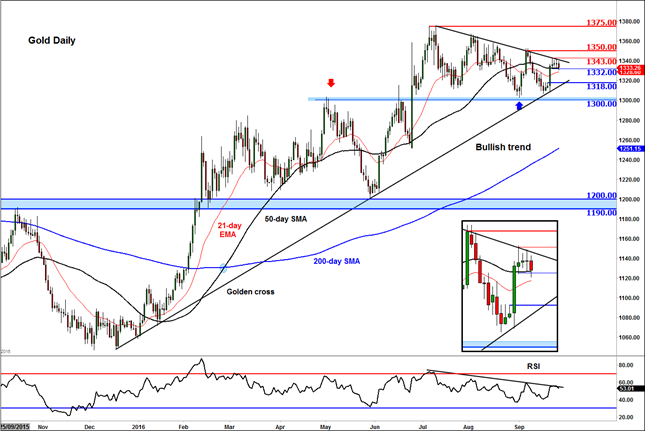