The first is seasonality factors. It is a well-known fact that the markets tend to underperform in the summer months, June in particular. There are several reasons for this, which I won’t discuss in this article as I want to focus on the other two reasons:

The second reason is interest rates. Up until now interest rates had been falling, which made higher-yielding equities the obvious choice for investment, along with property. Now that the Fed has started to tighten its policy, the impact of low interest rates are diminishing. The Fed still needs to shrink its balance sheet. It won’t go unnoticed. Other central banks may join the Fed in tightening their belts soon. The ECB, for example, has been growing under increasing pressure from German officials to raise interest rates because of rising inflation. In the event central banks overcook global inflation with their still extra-ordinary loose policy stances, they may be forced to raise interest rates a lot quicker than would otherwise be the case. This in turn will rapidly increase borrowing costs for consumers and businesses, which could hurt profits and share prices in some sectors of the economy.

The third reason why we may see a possible stock market correction soon is based on technical factors. A growing number of S&P 500 stocks are below their 200-day moving averages as the index charges forward into unchartered territories. This suggests that the markets are held up by only a handful of winning stocks. Once cracks start to appear in the leaders, things could unravel really quickly.

In terms of the S&P 500 itself, well it is closing in on the 2460-2485 area I have long been waiting for. As can be seen from the chart, this is where the projected measured-move objectives of two previous long-term ranges come together: from the years 2007-2013 and 2014-2016. Hence, we have the 200% extension levels of those two price swings marked on the chart at the above-mentioned 2460-85 area. In addition, this 2460-85 area roughly corresponds with the resistance trend of the long-term bull channel. What’s more, the momentum indicator, RSI, is currently in a state of negative divergence: it is yet to make a higher high despite the underling S&P 500 index’s latest breakout. The fact that this divergence is happening around the ‘overbought’ threshold of 70, makes this latest breakout even more questionable. So, if a correction were to happen it may very well start if and when the index reaches the 2460-85 area.

Don’t get me wrong. We have not seen any clear bearish technical signs that would either suggest that a top is in or a short-term correction is upon us. The markets could go a lot higher. I would definitely not recommend traders wasting their time and energy trying to pick the top. If anything, dips are still being bought, even at these levels. Even if we do see a correction as we expect, this does not necessarily mean the long-term bull trend would be over. Some might want to see a correction in order to buy stocks on the ‘cheap’ again. The S&P 500 could reach my projected target and simply consolidate there for a while, rather than fall off a cliff, before pushing higher again.

But all I am trying to get at is this: that bullish traders and investors may wish to proceed with extra care in this phase of the rally, and that bearish speculators should continue to stand out of the way until they see a clear reversal pattern, ideally around the 2460-2485 resistance area on the S&P 500. At the moment the bulls are in full control, but there is a danger that the tide will soon turn. 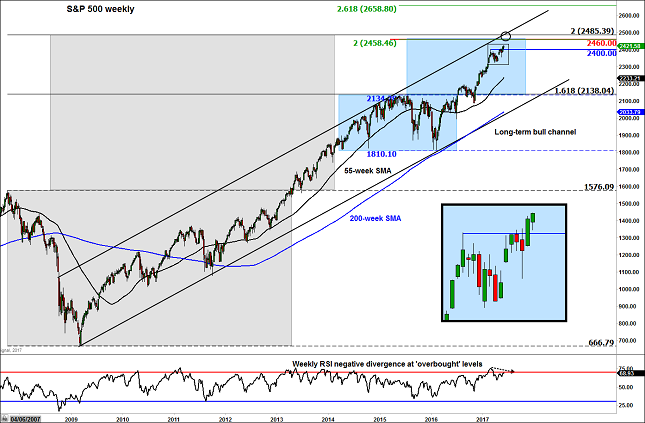