US stocks: start of a correction?

Investor sentiment has been hurt by a number of factors, which makes it difficult to pinpoint exactly what caused the sell-off and what to expect going forward.

Chief among them is the growing political turmoil in Washington which has raised serious doubts over US President Donald Trump's ability to push through fiscal stimulus measures. The departure of several business leaders from Trump's business council in response to his handling of the white supremacist violence has been the latest drama to unfold there. So, in a way this is in part the unwinding of the Trump rally that began after he won the Presidential election last year. We are still significantly above those levels, which means the potential for a deeper pullback in there.

Geopolitical tensions played a big part in last week’s sell-off but that unwound quickly as North Korea chose not to carry out the launch of ballistic missiles with the intention of striking the waters near the US territory of Guam. Now the focus has unfortunately returned to terrorism again after the Barcelona attack yesterday and European airline and leisure stocks were leading the declines on Friday, as a result.

Another, perhaps the biggest, worry is the potential unwinding of global central banks' vast quantitative easing stimulus programmes in the coming months, in particular from the European Central Bank. The US Federal Reserve has already started raising interest rates and is planning to begin reducing its massive $4.5 trillion balance sheet by not reinvesting the principal payments and maturing securities in the coming months. If inflation were to overshoot the Fed’s target then it may have to unload its assets a lot faster. This could put significant downward pressure on government bond prices, which could mean bad news for higher-yielding equities as they lose their appeal on a relative basis to rising government debt yield. With US stock market valuations being extremely stretched, and government debt yields still being near historically low levels across many developed economies, it is not hard to imagine a severe stock market correction from being triggered from this source alone.

A word or two on seasonality factors

It is also worth mentioning seasonality factors. Many investors choose not to participate during the summer months as they enjoy their time away from the markets. Stocks typically start going higher in Q4 and generally remain bid until Q2. So from a seasonality point of view, the latest stock market drop should not come as a surprise, not when they have enjoyed a massive rally in the preceding months and given how overvalued they are.

Is it too soon for dip buyers to step in?

But one common characteristic of this bull market has been this: after every dip, the buyers have been quick to step in. Will they do so again and potentially push the markets to a new all-time high soon? As much as I want to say no, no one cannot rule out that possibility. After all, not all market participants are rational investors. So, regardless of how “overvalued” the markets may be, what central banks are about to do, or just because a technical support level has broken down, no one – no one – can be certain that we have reached “the high.” However, the markets are still quite high relative to what popular valuation metrics and logic would suggest. So I am wary of the possibility of further sharp declines going forward.

S&P’s technical damage not severe… yet

On the technical front, with the US indices being at record high levels until last week’s sell-off we didn’t have any prior reference points to look out for resistance. But after last week’s drop, the markets did create some reference points to trade again. One particular area on the S&P futures I was looking for resistance was around 2472, which was the last support level prior to last week’s drop. Once support, this level turned into resistance upon the rounded retest on two occasions this week. Now the S&P futures has left behind additional broken levels that may act as resistance going forward. First and foremost, traders need to watch for potential resistance near last week’s low of around 2430-2438 area. If this area holds as resistance then the path of least resistance would remain to the downside. However if resistance breaks here then the S&P futures could rise towards the last broken support area around 2459-2464 next. What it does thereafter cannot be predicted now with any degree of confidence. On the downside, 2427 remains the key level of support as this was the last resistance prior the rally to a new all-time high. If this level breaks on a closing basis then we may see the S&P futures head towards the last significant low at 2402. Only if and when this level breaks down will we have our first lower low and thus the end of the current bullish phase. Then things could get really interesting. But will we get there? 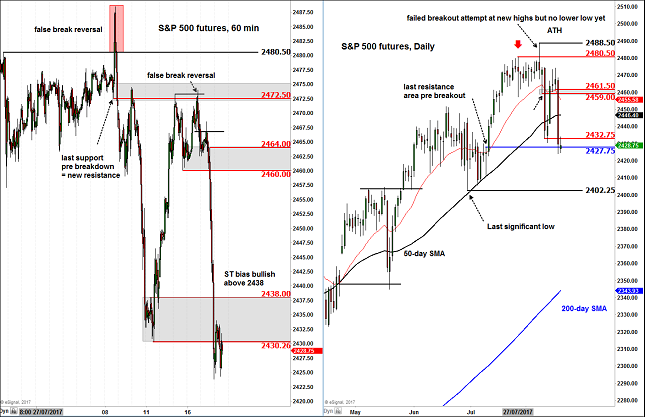