USD/CAD breaks down to 4-month low as US dollar tumbles, crude oil rebounds

On a sharply negative day for the US dollar, crude oil prices finally caught a significant bid on Tuesday, helping to lift the energy-correlated Canadian dollar and pressure USD/CAD below a key technical support level to hit a new 4-month low. Tuesday’s crude oil rebound aided in further boosting an already-strong Canadian dollar that had lately been surging due to recent hawkish comments from Bank of Canada officials indicating the possibility of an upcoming rate hike.

On a sharply negative day for the US dollar, crude oil prices finally caught a significant bid on Tuesday, helping to lift the energy-correlated Canadian dollar and pressure USD/CAD below a key technical support level to hit a new 4-month low. Tuesday’s crude oil rebound aided in further boosting an already-strong Canadian dollar that had lately been surging due to recent hawkish comments from Bank of Canada officials indicating the possibility of an upcoming rate hike.

Meanwhile, despite a sustained hawkish stance from the Federal Reserve, rather lackluster US economic data in recent weeks and months have generally weighed on the US dollar. Tuesday’s dramatic euro surge on the back of hawkish comments from ECB President Mario Draghi placed even more pressure on the dollar.

Oil-driven strength in the Canadian dollar coupled with the US dollar plummet prompted a sharp USD/CAD breakdown below the key 1.3200 support level on Tuesday. For the past two weeks, the currency pair has consolidated above this key level without making a verified breakdown with a daily close. If the current breakdown is sustained, a bearish path could be opened towards the major 1.3000 psychological support target, which was last hit in February. 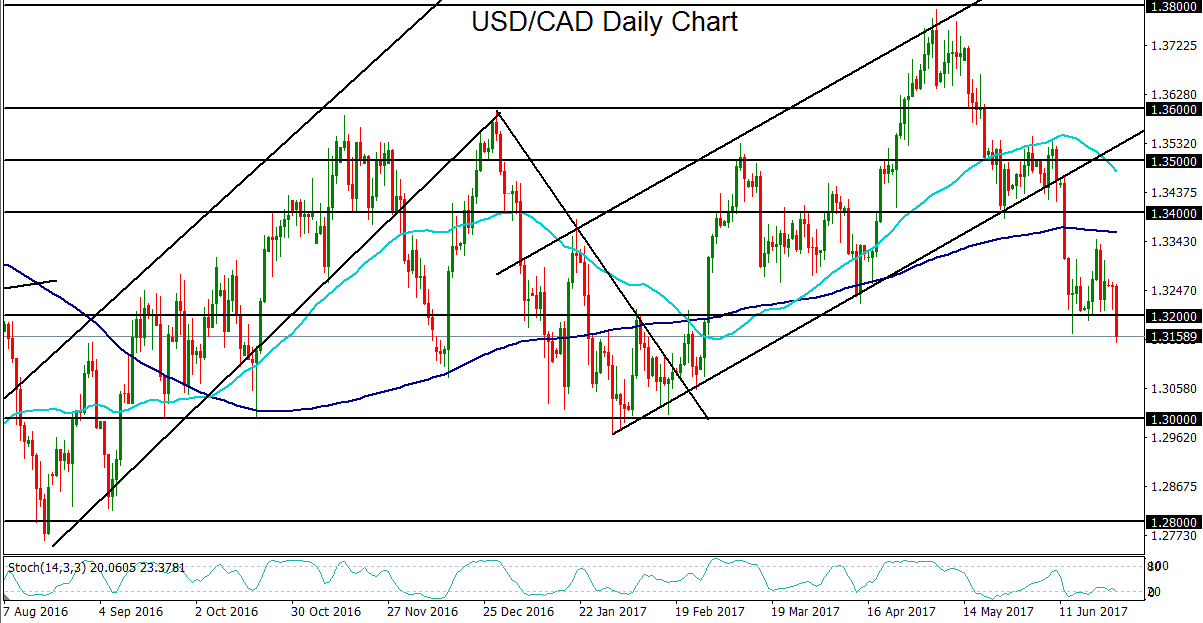