With the US dollar mostly maintaining its FOMC-driven surge and crude oil moderately weakened on Thursday morning, USD/CAD extended Wednesday’s strong breakout above major prior resistance at the key 1.3000 psychological level.

For Fed-watchers, Wednesday’s release of minutes from April’s FOMC meeting raised the likelihood of another interest rate hike in June, as FOMC members asserted that a June hike would be likely if economic data continued to improve as expected. This clearly hawkish leaning, which was a departure from the more dovish and cautious statements of the recent past, was reinforced on Thursday by comments from New York Fed President William Dudley. Traditionally more of a dove, Dudley made comments that rather uncharacteristically gave hawkish support to the FOMC minutes, including his view that a June or July rate hike would be reasonable.

Also on Thursday, crude oil prices initially fell in the morning before paring some of those losses later in the trading day. Helping to pressure dollar-denominated crude oil was the stronger US dollar as well as a gradual abatement of worries over global supply disruptions that have recently pushed up oil prices. The pullback in crude oil dragged down the oil-correlated Canadian dollar which, in turn, helped to further support USD/CAD. Upcoming on Friday morning are a few important economic data releases out of Canada that are also likely to affect the currency pair. Canada’s Consumer Price Index, a key inflation measure, will be released on Friday morning along with Canadian retail sales numbers.

From a technical perspective, USD/CAD, as mentioned, has broken out above key prior resistance at the 1.3000 psychological level. That level was also the 61.8% Fibonacci retracement of the last bearish run from the late-March high down to the early-May 10-month low around 1.2500. In the process of breaking out above 1.3000, the currency pair has also broken well above its 50-day moving average.

As recent crude oil supply disruptions continue to fade, and the US dollar remains driven in the short-term by renewed anticipation of an impending Fed rate hike, USD/CAD could potentially have significantly further to rise. In the event that the currency pair continues to trade above 1.3000, a further recovery for USD/CAD could see its next major upside target around the key 1.3400 resistance level, which is also where the 200-day moving average is currently situated. 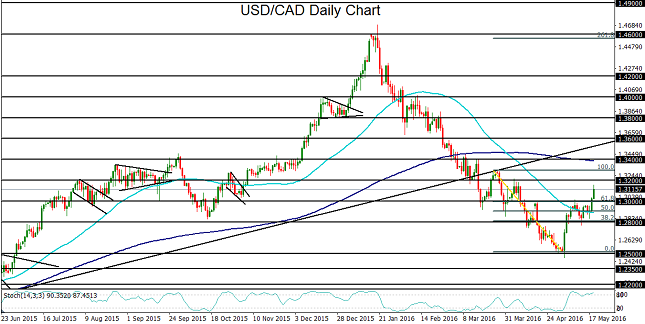