Tuesday’s dive occurred as crude oil prices continued to strengthen on sustained hopes for an output freeze among major oil-producing nations, which boosted both the Brent and WTI crude benchmarks as well as the oil-correlated Canadian dollar. Also driving up the Canadian dollar early on Tuesday was Canada’s m/m GDP data, which showed gross domestic product growing by a better-than-expected 0.2% in December, against the previous consensus of a 0.1% rise.

With the US dollar mostly mixed on Tuesday, these factors lifting the Canadian dollar resulted in a sharp drop for the USD/CAD currency pair down to the noted 1.3400 support area.

USD/CAD’s precipitous plunge from its January 12-year high above 1.4600 resistance has been at nearly as steep an angle as its rise to that high beginning in early December. The rise was largely due to persistent drops in crude oil prices along with a consistently strengthening US dollar. The subsequent fall since mid-January has been prompted by a wavering US dollar along with some stabilization of oil prices near their multi-year lows.

Currently, the directional outlook for both the Canadian dollar and the USD/CAD currency pair continues to hinge primarily on where crude oil prices may be headed. Oil’s recent rise from 12-year lows in the past few weeks has been driven by little more than hope and speculation concerning a proposed OPEC/Russia deal to freeze crude production at January levels. If this deal fails to materialize, or if any significant obstacle to a potential deal arises, crude oil could fall substantially once again, pressuring the Canadian dollar with it and boosting USD/CAD in the process. Furthermore, even if a deal is successfully struck, there are no assurances that a coordinated output freeze would make a sufficient impact on the vastly oversupplied crude oil market to prompt an oil price recovery.

In the event that crude oil prices start to fall once again, USD/CAD has the potential to begin reversing its many weeks of losses and rebound towards a continuation of the long-term bullish trend. This turnaround scenario would be supported on any breakout above the key 1.3600 resistance level.

Until that time, however, crude oil’s recent upside momentum has placed increasing pressure on USD/CAD. Any sustained breakdown for USD/CAD below the noted 1.3400 level and 200-day moving average could then begin to target major support around the 1.3000 psychological level once again. 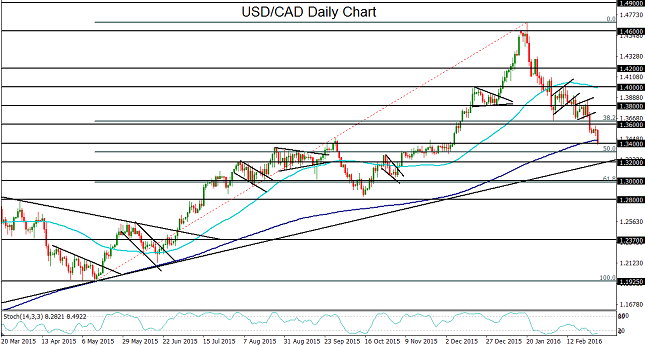