Share:
USD/CAD shot up well above the key 1.3600 level on Thursday, extending both Wednesday’s breakout and the sharp rise for the currency pair that has been in place for the past two weeks. This rise was most recently extended on Monday, when the Canadian dollar plunged against the US dollar after new US tariffs of up to 24% on Canadian lumber imports were announced. This move has been intensified by persistently weakening crude oil prices that have virtually been in a state of freefall for the past two weeks, weighing on the oil-linked Canadian dollar.

On Thursday, crude oil prices fell further on general concerns surrounding global oversupply that were exacerbated by news that Libya had resumed production of crude oil intended for export at two major oil fields. This news further pressured an already-struggling Canadian dollar. Meanwhile, the US dollar received a small boost on Thursday – despite worse-than-expected economic data in durable goods orders and weekly jobless claims – as the euro fell on the heels of unchanged policy from the European Central Bank.

Upcoming potential catalysts for further USD/CAD movement are scheduled for Friday. Canada’s monthly Gross Domestic Product (GDP) for February will be released. After January’s better-than-expected +0.6% showing, forecasts for February hover around +0.1%. US Advance GDP data will also be released on Friday, but in a quarterly, annualized format. Expectations for Q1 annualized US GDP are around +1.3%.

Ahead of these key data releases, USD/CAD continues to show strength and follow-through on its recent tentative breakout above 1.3600 previous resistance. Whether this breakout is maintained will depend on several factors, including Friday’s US and Canadian GDP data, whether or not crude oil continues its recent freefall, and the ongoing state of trade relations between the US and Canada given the Trump Administration’s increasingly protectionist stance. With further follow-through momentum above the 1.3600 resistance breakout, the next major upside target is around the key 1.3800 resistance level. 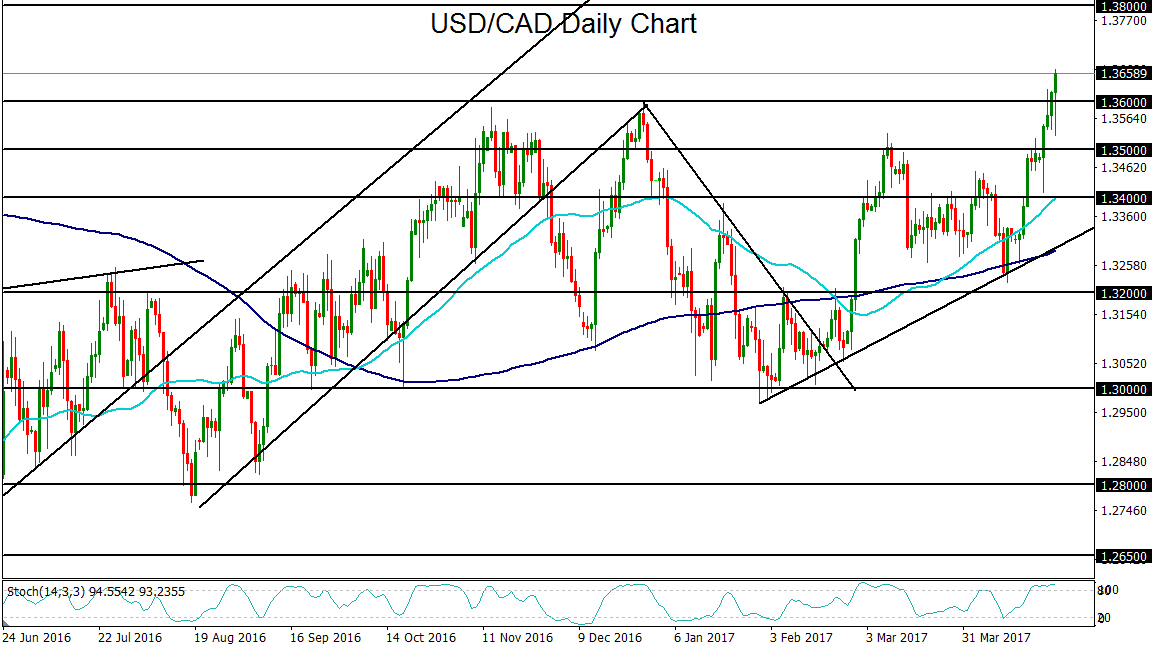