Since it hit a new five-month low below 1.2900 late last week on the last day of March, USD/CAD has rebounded to hit a high briefly above 1.3200 resistance as of Tuesday. This rebound has occurred as the price of crude oil has retreated in the past several trading days, dragging the oil-correlated Canadian dollar down with it. Renewed pressure on oil prices has been brought on after an apparent stumbling block recently surfaced surrounding proposed negotiations among major OPEC nations and Russia to coordinate a cap on crude oil production. Specifically, some OPEC nations including Saudi Arabia have found it difficult to accept a concerted output cap if Iran does not agree to participate. Of course, Iran is in the midst of ramping up its own oil production to make up for lost time and revenue after previous sanctions long imposed on the country were recently lifted.

The drawn-out speculation over these output negotiations have led to rather choppy price action in the past few months for both crude oil and the Canadian dollar as markets have reacted in knee-jerk fashion to periodic utterances, both optimistic and pessimistic, by ministers of major oil-producing countries.

For more than two months, USD/CAD has slid sharply from its January long-term high above 1.4600 as crude oil has rebounded, boosting the Canadian dollar, and the US dollar has steadily weakened on lowered expectations for further US interest rate hikes by the Federal Reserve. After reaching down to the 1.3000 psychological support level by mid-March, however, the currency pair dipped below that level on several occasions but has had a hard time remaining below it. The 1.3000 area is also around the 61.8% Fibonacci retracement level of the bullish trend from the May 2015 lows up to the noted January long-term high above 1.4600.

Upcoming economic events to take note of when trading the currency pair this week include the release of meeting minutes on Wednesday for last month’s FOMC meeting, speeches by various Fed members including Fed Chair Janet Yellen on Wednesday and Thursday, and key government reports on employment change and the unemployment rate coming out of Canada on Friday.

Outside of these events, with any further slide in crude oil prices, USD/CAD could extend its current rebound, which would lend support to a tentative bottoming of the currency pair. With any breakout and recovery momentum above 1.3200, the next major upside targets on a continued rebound are at the key 1.3400 and 1.3600 resistance levels. To the downside, any sustained breakdown below the noted 1.3000 psychological support level should find major support around 1.2800. 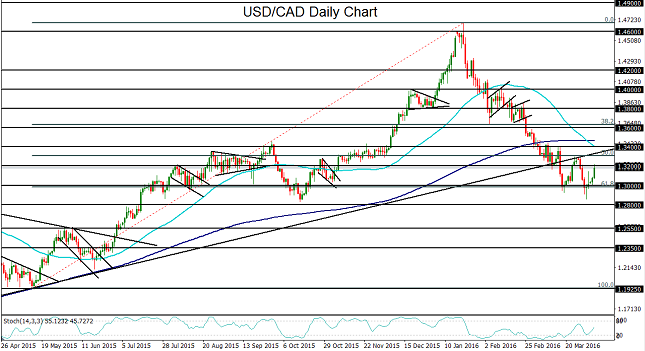