USD/CAD range-bound ahead of Bank of Canada, crude oil data

USD/CAD has essentially been range-bound within a modestly rising trend channel in recent weeks as the currency pair has been subject to the push and pull of both the US dollar and crude oil prices, which typically exert a strong influence on the energy-correlated Canadian dollar. Most recently, despite a surging US dollar, USD/CAD has fallen to the bottom of this trend channel, due in part to crude oil prices that have been well-supported as of late by talk of a pending OPEC deal to cut oil production.

USD/CAD has essentially been range-bound within a modestly rising trend channel in recent weeks as the currency pair has been subject to the push and pull of both the US dollar and crude oil prices, which typically exert a strong influence on the energy-correlated Canadian dollar. Most recently, despite a surging US dollar, USD/CAD has fallen to the bottom of this trend channel, due in part to crude oil prices that have been well-supported as of late by talk of a pending OPEC deal to cut oil production.

Aside from crude oil, however, the Canadian dollar will also be subject to monetary policy talk by the Bank of Canada (BOC) on Wednesday morning, when the central bank issues its report and rate statement along with a subsequent press conference. The BOC is not expected to make any change to interest rates during its Wednesday meeting, but some have speculated that a rate cut may indeed be a significant possibility in the near future. The last time it happened was in July of 2015, when the overnight rate was cut from 0.75% to its current 0.50%. Any indication or nuance from the BOC suggesting the prospect of a rate cut in the foreseeable future should weigh rather heavily on the Canadian dollar, boosting USD/CAD. Alternatively, a more hawkish assessment by the central bank should lend further strength to the Canadian dollar, and further pressure on USD/CAD.

With these two key risk events in the Bank of Canada policy statement and US crude oil data, USD/CAD could see more movement on Wednesday than it has been accustomed to recently. With any surge in crude oil prices and/or a more hawkish BOC on Wednesday, USD/CAD could break down below the noted trend channel, targeting the 1.300 psychological level, which is currently in the vicinity of the key 200-day moving average. Any further breakdown below 1.3000 could lead the currency pair towards its longer-term objective around the 1.2800 support level. Conversely, in the event of a news-driven bounce for USD/CAD on Wednesday, key upside resistance currently lies around the 1.3300 level. 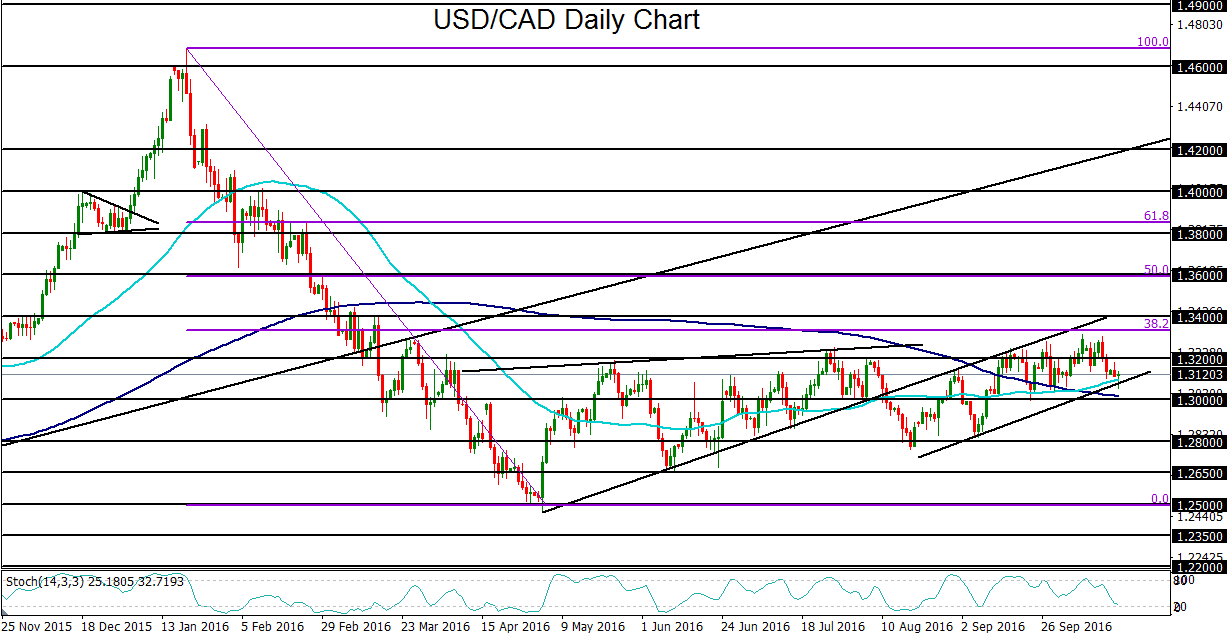