Despite a larger-than-expected draw in US crude oil inventories last week as reported by the US Energy Information Administration on Wednesday, crude oil prices continued to slide, extending the precipitous plunge that has lasted for the past four weeks.

Despite a larger-than-expected draw in US crude oil inventories last week as reported by the US Energy Information Administration on Wednesday, crude oil prices continued to slide, extending the precipitous plunge that has lasted for the past four weeks.

This sustained pressure on crude oil has once again begun to weigh heavily on the energy-linked Canadian dollar, even though Canada’s currency has recently enjoyed significant upside momentum on the back of comments last week by Bank of Canada officials suggesting that the central bank may be preparing to raise interest rates.

Those central bank comments triggered a massive selloff in the USD/CAD currency pair last week, as the Canadian dollar shot-up while the US dollar was still just struggling to recover from prolonged weakness. This selloff prompted a clear technical breakdown below a large uptrend channel that had been in place since the beginning of the year. The breakdown extended further down to hit and dip slightly below the key 1.3200 support level before forming a tentative bottoming pattern.

This week, despite the BoC’s newly-revealed hawkishness, the pronounced plummet in crude oil prices has once again begun to exert heavy pressure on the Canadian dollar, pushing up the USD/CAD currency pair from its noted bottoming pattern around 1.3200.

The next stop for USD/CAD will hinge largely upon whether crude oil prices continue to be heavily pressured, as well as the monetary policy trajectories of both the US Federal Reserve and Bank of Canada. With both central banks now appearing increasingly hawkish, the policy divergence between the two may not be as pronounced as it has been. Therefore, crude oil prices should exert an even more prominent influence on the currency pair.

Under this assumption, it is difficult to see much alleviation of pressure on crude oil given the many factors pointing to a continued oil glut even with the extended OPEC-led deal to limit output. Without a meaningful rebound/recovery for crude oil prices, the Canadian dollar may have a difficult time continuing its BoC-driven rally. In this case, the current rebound for USD/CAD is likely to continue as the US dollar continues its own rebound while the Canadian dollar remains dragged down by lagging oil prices. With any extension of the current USD/CAD rebound, the next major upside target is at the key 1.3400 resistance level. Further upside momentum above 1.3400 could boost the pair towards successively higher resistance objectives around 1.3500 and 1.3600. 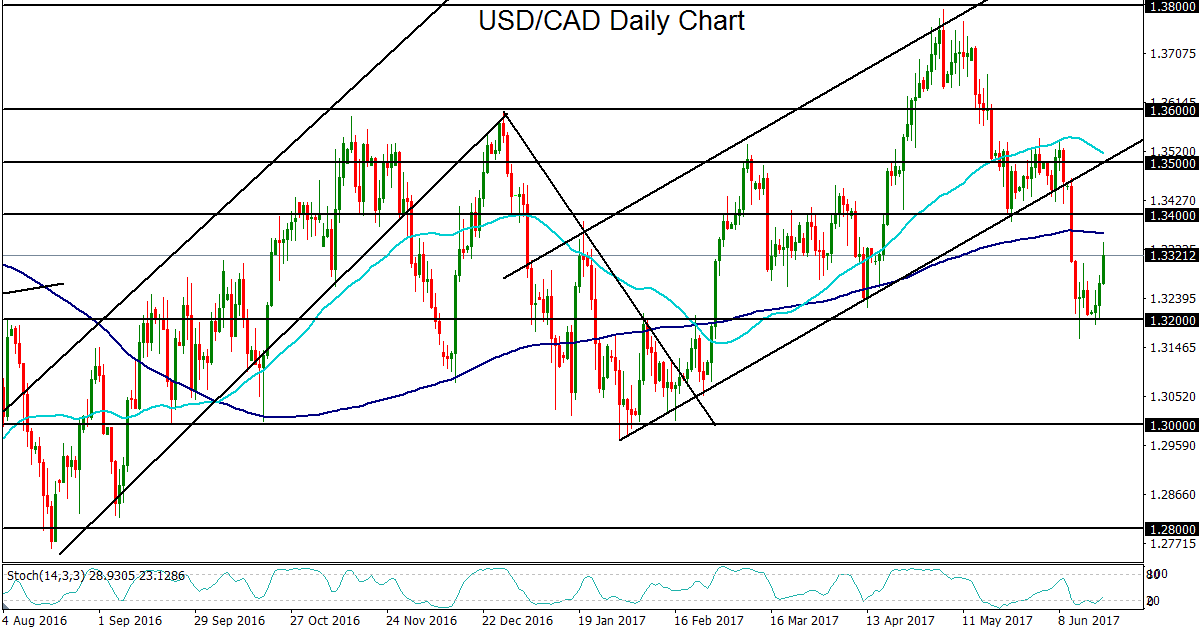