<p>USD/CAD dropped to approach a new 9-month low on Tuesday as the key Fed policy statement loomed only a day away and crude oil prices neared multi-month highs.</p>

USD/CAD dropped to approach a new 9-month low on Tuesday as the key Fed policy statement loomed only a day away and crude oil prices neared multi-month highs.

The current lows for USD/CAD have been the latest culmination of a strong downtrend that has been in place since January’s long-term highs near 1.4700. This downtrend has largely resulted from the combination of a generally-weakening US dollar and a strengthening Canadian dollar boosted by recovering crude oil prices within the past three months.

During the course of this downtrend, the currency pair has broken down below multiple key support factors, including the 1.4000 and 1.3000 psychological levels, as well as a major uptrend line that extends back to the lows of July 2014. Just last week, USD/CAD turned down sharply from the key 1.3000 psychological resistance level as crude oil prices rebounded, apparently shrugging off the opening plunge after the prior weekend’s failed production freeze negotiations in Doha, Qatar.

Through the course of last week, the currency pair continued to move lower as crude oil remained supported and positive inflation and retail sales data emerged out of Canada late last week, further boosting the Canadian dollar. This prompted USD/CAD to drop well below the 1.2800 level and begin targeting the 1.2500 psychological support objective to the downside.

Further indicating a bearish environment for the currency pair, for the first time since 2014 its 50-day moving average crossed below its 200-day moving average several weeks ago, forming a technical "death cross" and suggesting strong bearish momentum.

Wednesday’s Fed policy statement could potentially contribute to accelerating the current downtrend in the event of a dovish outcome. If the Fed continues its recent trajectory of increasing dovishness after December’s rate hike, the US dollar is likely to continue trading under pressure, which could also give a further boost to crude oil. In that event, the noted 1.2500 psychological level continues to be the downside price area to watch. With any breakdown below 1.2500, the next major downside target is at the 1.2200 support level. 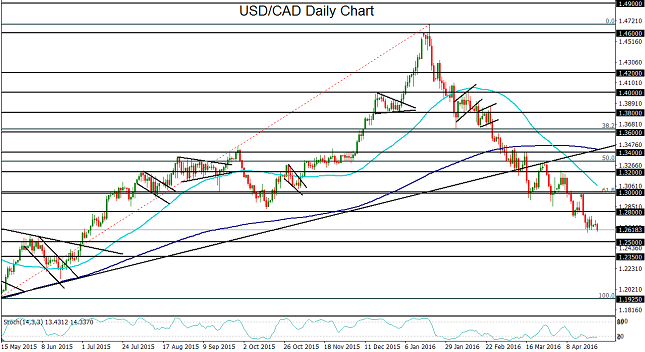