<p>Canadian GDP data for March was released on Tuesday, revealing a second consecutive month of economic contraction at -0.2%, further disappointing prior expectations of -0.1%. The previous month of February had shown a smaller contraction at -0.1%. The resulting pressure on the Canadian dollar on Tuesday was exacerbated by a pullback in crude oil prices ahead of Thursday’s highly anticipated OPEC meetings. This combined pressure on the Canadian dollar was coupled with continued support for the US dollar from increased anticipation of an impending Fed rate hike, prompting an early surge for USD/CAD.</p>

Canadian GDP data for March was released on Tuesday, revealing a second consecutive month of economic contraction at -0.2%, further disappointing prior expectations of -0.1%. The previous month of February had shown a smaller contraction at -0.1%. The resulting pressure on the Canadian dollar on Tuesday was exacerbated by a pullback in crude oil prices ahead of Thursday’s highly anticipated OPEC meetings. This combined pressure on the Canadian dollar was coupled with continued support for the US dollar from increased anticipation of an impending Fed rate hike, prompting an early surge for USD/CAD.

The currency pair has been trading within a pronounced rebound and recovery for most of May after having dropped down to a 10-month low around key 1.2500 support in the beginning of May. This month-long recovery saw its latest culmination in last week’s high just short of 1.3200 resistance. Currently, USD/CAD continues to trade within a range between its 50-day moving average to the downside and 200-day moving average to the upside in anticipation of key events this week that could either help extend the currency pair’s recovery or prompt a return to re-test recent lows.

As noted, Thursday’s meetings of OPEC nations could have a major impact on oil prices, with a strong correlated effect on the Canadian dollar. The meetings will occur within an environment of major oil producers in the Middle East maintaining high levels of output and continuing to compete for market share. Beyond crude oil, USD/CAD is also very likely to be impacted by Friday’s employment numbers from the US, most notably the Non-Farm Payrolls data. In addition, Canadian trade balance figures for April will also be released on Friday.

With respect to these major economic events potentially affecting both the US and Canadian dollars, possible breakout points for USD/CAD are well defined, especially to the upside. In the event of further Canadian dollar pressure and continued support for the US dollar, a USD/CAD breakout above the noted 1.3200 resistance level would confirm a continuation of May’s recovery trend. In that event, the next major upside target is around the 1.3400 level, which is also near the current location of the 200-day moving average. Any further rise could prompt a move towards a higher resistance objective around 1.3600. To the downside, any strong breakdown below the 1.3000 psychological support level could prompt a move back down towards 1.2800 support. 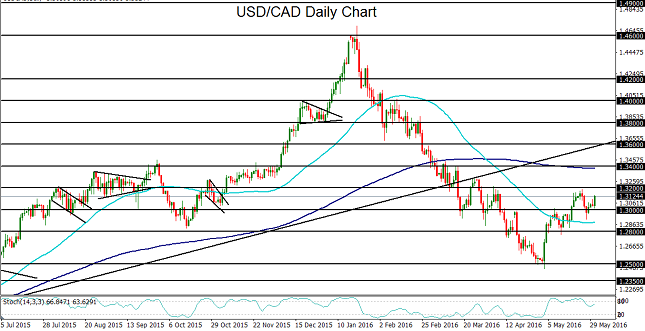