With the EUR/USD rallying to above 1.1300 level today, the USD/CHF is unsurprisingly dropping like a stone. The two currency pairs are inversely-correlated of course because the SNB has more or less pegged its policy to that of the ECB. The Swiss franc is also a safe haven currency and it tends to do better during periods of market turmoil, such as now. Hence, the EUR/CHF has also fallen sharply over the past several days, even if most other euro crosses have rallied as traders unwind their carry trades.  The Swissy could be ‘saved’ (temporarily anyway) either by Janet Yellen saying something surprisingly hawkish at her two-day testimony, which starts tomorrow, or if investor sentiment improves suddenly. Neither looks likely.

But the chart of the USD/CHF suggests the Swissy may have made a major turning point over the past few months. It has twice failed to break decisively above the January 2015 high: once in November 2015 and again in January this year. In other words, a triple top reversal pattern has been formed. As this is a major reversal formation, the selling pressure could gather pace as more support levels break down, which is now likely.

In fact, the reversal has already seen the Swissy break two bullish trend lines, more or less confirming that the trend has changed. Today, it has also taken out key support in the 0.9785/9800 area too, before dropping to test its 200-moving average at 0.9715. As the short-term charts now suggest price may have dropped too far too fast, rates could bounce back a touch on profit-taking. But essentially the path of least resistance is to the downside and the broken support at 0.9785/9800 is highly likely to cap any potential rallies.

If the 200-day moving average fails to offer much support, then there are not a lot of further reference points to watch until the next potential support and psychological level of 0.9500. It is also worth keeping an eye on the Fibonacci levels of the most recent rally, with the 38.2% retracement coming in around the 0.9570/5 area and 61.8% retracement at 0.9105. The 50% retracement level (not a Fibonacci level) comes in at 0.9335/40.

If however the USD/CHF breaks back above the aforementioned 0.9785/9800 range, then this could pave the way for a rally towards, if not beyond, parity, although that being said, the backside of the broken trend line may prevent price from getting that far. 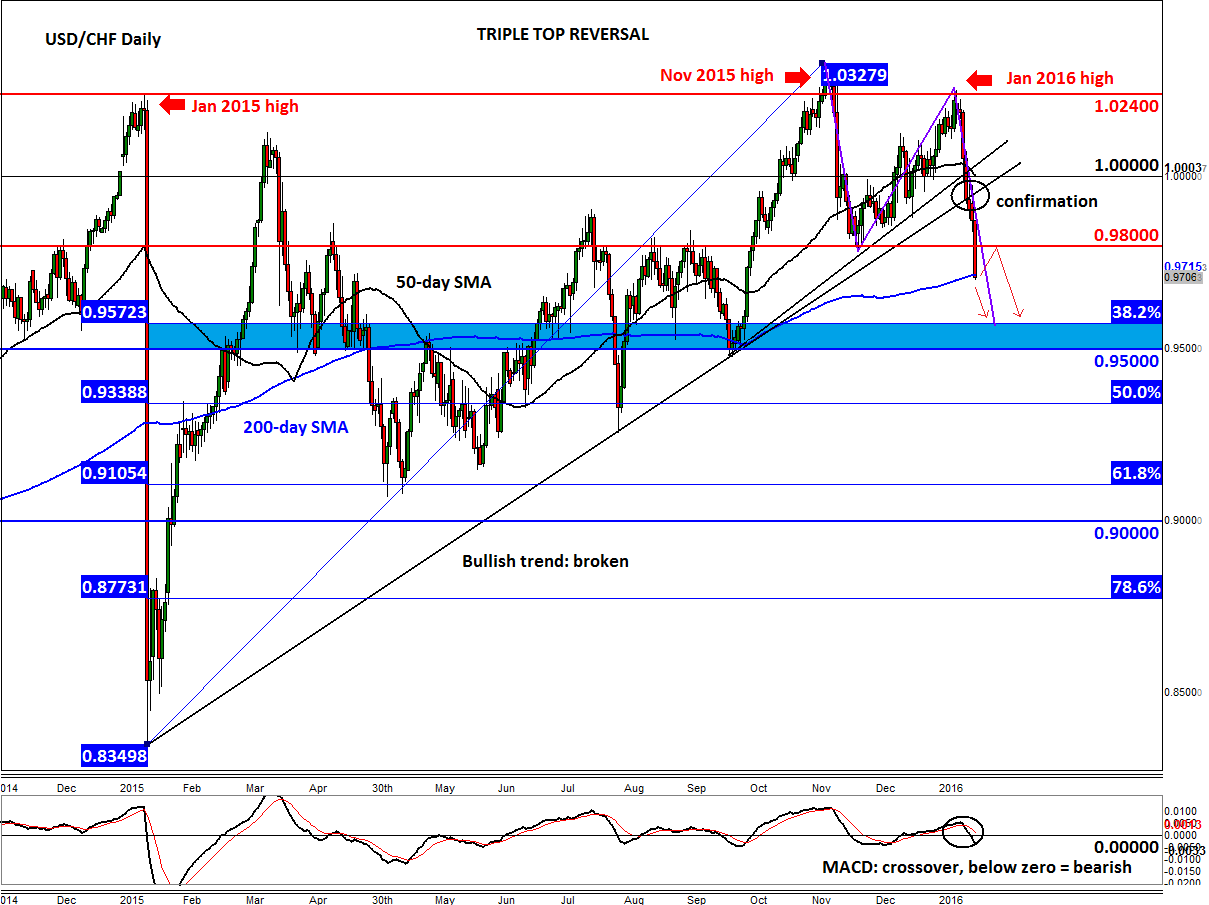