As the US Senate prepared for a potential floor vote on its new tax reform plan this week, as well as the confirmation hearing for Federal Reserve Governor Jerome Powell to be instated as the new chair of the central bank, the US dollar remained pressured as it has been for the past three weeks.

As the US Senate prepared for a potential floor vote on its new tax reform plan this week, as well as the confirmation hearing for Federal Reserve Governor Jerome Powell to be instated as the new chair of the central bank, the US dollar remained pressured as it has been for the past three weeks. This dollar pressure has been clearly displayed on the USD/JPY chart, which has fallen precipitously this month within its wide trading range.

The uncertainties surrounding the timing, content, and viability of the new Republican tax plan have weighed heavily on the dollar in the past few weeks. While anticipation of tax relief helped prop up the dollar in October, November has seen markets become more skeptical as to whether tax reform will be passed and if so, when it might begin to show benefits for the US economy. Heated debate on the tax issue among senators, including Republicans, has further increased market skepticism.

Also contributing to dollar uncertainty this week will be the Senate Banking Committee’s hearing for current Fed Governor Jerome Powell to be confirmed as the next Fed Chair after current Chair Janet Yellen’s term expires in February. While Powell has been seen as the candidate with monetary policy leanings most similar to Yellen’s, and has even been considered slightly more hawkish than Yellen, there are still many unknowns as to the Fed’s future trajectory under Powell. This is especially the case after last week’s FOMC minutes, which displayed Fed members’ clear concerns about persistently low inflation and the possibility of a financial market reversal. Although markets continue to see a December rate hike almost as a foregone conclusion, there is much less confidence about the pace of monetary policy tightening in 2018 given the Fed’s ongoing concerns.

Amid the pressures and uncertainties surrounding US tax reform and the Fed’s monetary policy path, USD/JPY dipped below the 111.00 level on Monday, establishing a new two-month low, before paring some of those losses. Since reaching up to the major 114.50-area resistance in early November, USD/JPY has dropped below several major support factors, including its 50-day moving average, the key 112.00 support area, and the 200-day moving average. Currently, price has pulled back by around 50% of its two-month rise from early September to early November. With any further obstacles on the road to tax reform or more dovish hints emanating from the Fed, USD/JPY could extend its losses. Any sustained breakdown below 111.00 could open the path to key downside targets around 110.00 and 108.00. 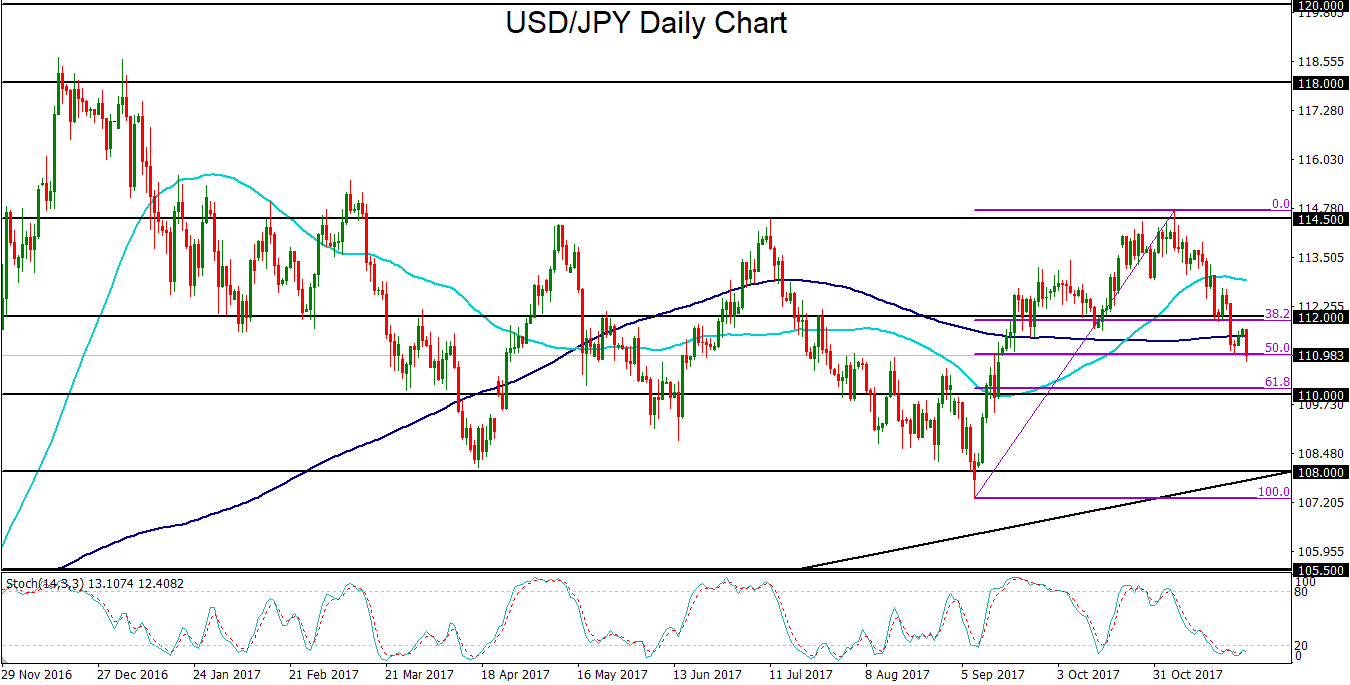