<p>On Monday, USD/JPY slid back down to major support around the 111.00 level in the aftermath of last week’s market-moving comments by Fed Chair Janet Yellen that were seen as exceptionally and uncharacteristically dovish. This extended slide for the currency pair has occurred despite a better-than-expected Non-Farm Payrolls reading out of the US on Friday and generally stable or rising equity markets that have tentatively begun to slow asset flows towards the safe haven Japanese yen.</p>

On Monday, USD/JPY slid back down to major support around the 111.00 level in the aftermath of last week’s market-moving comments by Fed Chair Janet Yellen that were seen as exceptionally and uncharacteristically dovish. This extended slide for the currency pair has occurred despite a better-than-expected Non-Farm Payrolls reading out of the US on Friday and generally stable or rising equity markets that have tentatively begun to slow asset flows towards the safe haven Japanese yen.

Friday’s positive employment reading of 215,000 jobs added in the US against prior expectations of 206,000 largely failed to prompt any significant dollar rebound after the plunge that occurred as a result of Yellen’s dovish remarks earlier in the week, particularly with regard to low inflation prospects. With market participants having progressively lowered expectations for further US interest rate hikes in the foreseeable future, pressure on the US dollar is likely to continue.

From a price perspective, USD/JPY has reached down to hit a critical support juncture at the noted 111.00 level. Since February, this level has been touched and respected at least three times prior to the current re-test. The 111.00 level also forms the lower border of a large descending triangle pattern that has been in play for the better part of the past two months. Early last week, the upper border of this triangle was reached, which was also around the key 50-day moving average, before the dollar began its current slide.

With the Fed appearing to become increasingly dovish, the directional bias for the dollar has become increasingly pressured to the downside. Furthermore, recent events that should have had a positive effect on USD/JPY, including further easing by the Bank of Japan or positive economic data like last week’s Non-Farm Payrolls have not produced the expected result of strengthening the currency pair. The bearish outlook for USD/JPY would be further supported in the event of any pullback or correction in the current stock market rally. Such a retreat would likely result in more safe haven flows back towards the yen, which would further pressure USD/JPY.

A USD/JPY breakdown below the noted 111.00 support level and descending triangle pattern would confirm this bearish outlook, continuing the downtrend that has been in place for the past several months. In this event, the next major downside targets are at the 110.00 and 108.00 support levels. 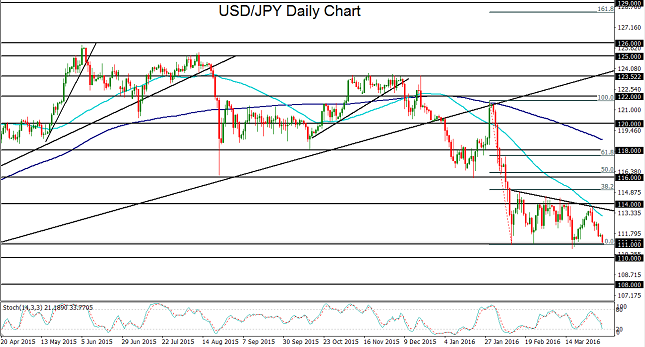