It has been a relatively quiet day in the markets due in part to the lack of any major economic news. The US economic calendar in particular will be rather light this week due to Thanksgiving on Thursday. But we will still have a few potentially market-moving macro pointers to watch this week.

It has been a relatively quiet day in the markets due in part to the lack of any major economic news. The US economic calendar in particular will be rather light this week due to Thanksgiving on Thursday. But we will still have a few potentially market-moving macro pointers to watch this week. Wednesday will be a little busier compared to the other days of this week as we will have the latest manufacturing and services PMIs from the Eurozone, UK’s Autumn Statement and also the last FOMC meeting minutes, among other things. Today’s North American data included Canadian retail sales as well as US existing home sales and the Richmond Manufacturing Index. Canadian headline retail sales came in at +0.6% month-over-month, but core sales were flat, disappointing expectations for a 0.6% rise. US existing home sales on the other hand beat expectations, as did the Richmond index. Consequently, the USD/CAD bounced back and it was supported further by the drop in the price of oil, which weighed on the commodity currency.

As a result of the rally, the USD/CAD once again held its own above the technically-important 1.34 handle which had been resistance in the past. The Loonie has been putting in higher highs and higher lows ever since it bottomed out around the 1.25 area back in May. Nearly 1000 pips higher and 6 months later, the bullish bias remains intact as so far we haven’t had any lower lows. This makes sense from a fundamental perspective with the dollar rising amid increasing expectations that the US Federal Reserve will tighten its policy, while the Bank of Canada is likely to remain dovish for some time yet.

I think that over time, the USD/CAD will probably revisit 1.40s again. But in the short-term, it will face several hurdles and there is a risk that it could actually sell-off if oil prices were to surge higher as a result of an agreement between the OPEC and Russia to curb crude supply in a meaningful way. Thus, traders may be better off to take it from one level to the next.  With that in minds and with 1.34 defended once again, the next potential bullish objective is at 1.35, followed by the recent range high at 1.3585/90. Thereafter, the next prior reference point is around 1.37 and then we have the long-term 61.8% Fibonacci retracement coming in at 1.3835/40. Meanwhile if support at 1.34 gives way on a daily closing basis then we may see a deeper pullback to the next line of defence at 1.3295 which resides just above the now-rising 50-day moving average. For as long as the USD/CAD holds above this level, our medium-term bias would remain bullish even if we were to see a short-term pullback. 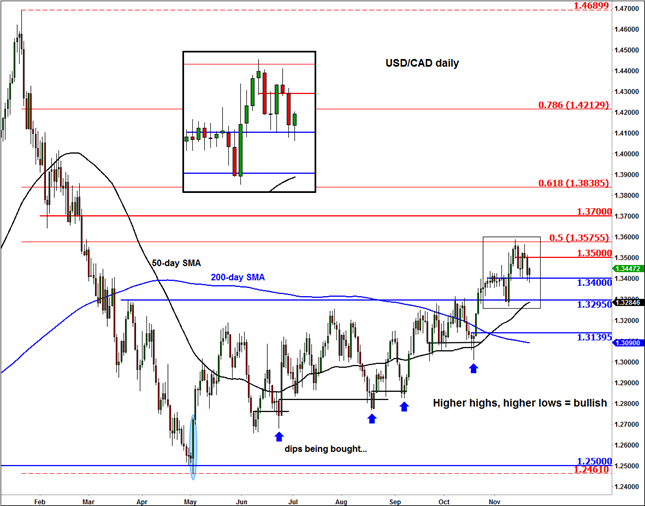