Last week’s Canadian data releases beat expectations, yet the North American dollar finished the week lower against her southern neighbour. Manufacturing and retail sales both fell less than expected, while CPI was in line. The market was focused more on speeches by Bank of Canada’s Governor Stephen Poloz and Senior Deputy Governor Carolyn Wilkins. Mr Poloz said on Thursday that monetary conditions were “about right,” adding that global conditions have eased a lot. Though his comments were taken by the market as being less dovish than expected and the Canadian dollar rallied, the currency then quickly rebounded on Friday. It looks like investors paid more attention to Wilken’s comments that were made two days earlier, on Tuesday. The latter mentioned that the BOC has room to manoeuvre and other policy tools at its disposal, for example forward guidance. Given that Wilkens is considered a front-runner to take the head position when Poloz’s term ends in mid-2020, it appears like the markets took her comments more seriously than the current leader’s assessment.

Indeed, the USD/CAD managed to rise further today despite more positive news from Canada: wholesale sales rebounded by 1.0% in September after a 1.2% drop the month prior. Up next, we will have Canada’s latest estimates of Current Account and GDP on Thursday and Friday, respectively. Given the CAD’s inability to find support from last week’s slightly positive macro data, I am doubtful whether these figures will provide any meaningful support either. Investors are probably looking forward to the Bank of Canada’s next rate decision on December 4. Although the BOC is expected to hold rates unchanged for the 10th consecutive time, the Canadian dollar could fall sharply if the central bank provides – what the markets are slowly pricing in now – a strong hint of a rate cut. 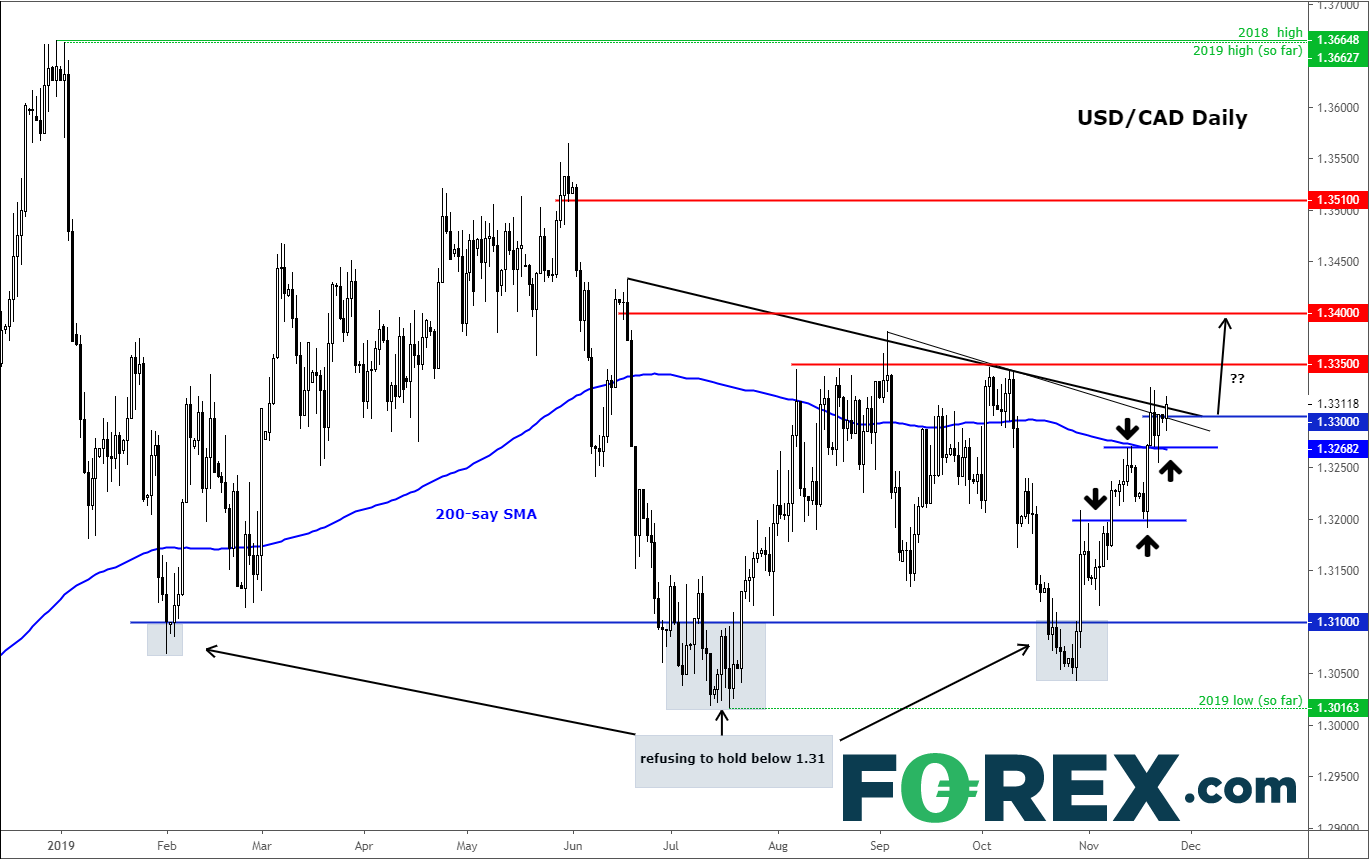 Ahead of the BOC’s meeting, we may see the USD/CAD drift further higher as investors price in a dovish rate decision, or price out the odds of further rate hikes. Consequently, the USD/CAD could break through the bearish trend line that was being tested at the time of writing circa 1.3300. A daily close above this level could pave the way for a potential rally above the old high of 1.3350 and towards 1.3400 next. However, in the event of a price forming a key reversal candlestick around this 1.3300 level, then in this potential scenario the bullish argument will have to be put on hold.