Risky assets such as stocks and crude oil, and by extension commodity currencies, have extended their gains, but the rally could halt soon...

Commodity dollars have outperformed so far in the week, supported by growing appetite for risk with the major equity indices, copper and crude oil prices all printing new highs for the year. While the trend could certainly extend, we are a bit cautious and wary of a sudden drop in these risky assets given the weakening outlook for global GDP. Admittedly, there aren’t many scheduled fundamental events to trigger this potential response in the markets this week, with China out and US data notably quiet. But equity indices are starting to look a bit stretched and with the major of US companies having already reported their earnings results, they could come under pressure again, due, among other things, to profit-taking. Oil prices may resume their slide now that the Venezuela news is priced in. The 2019 demand outlook for oil is not great, while the prospects of increased shale supply and competition elsewhere could drive prices further lower. So, the Canadian dollar’s rally could come to a halt soon.

Today’s key data from North America is the ISM Services PMI at 15:00 GMT. After the strong manufacturing PMI data last week, today we will find out how the more dominant services sector has fared. Economists think activity in the sector expanded, but at a slower pace compared to December. The consensus forecast is for the headline PMI to come in at 57.2 compared to 57.6 last. Any reading above 50.0 suggests the sector is growing.  In the event we see a stronger print here, then the dollar could potential extend its rebound, while a disappointing number could halt the rebound we have seen since Friday.

Apart from the ISM, there’s isn’t much in the way of other major economic news from the US this week. But we will have the latest jobs report from Canada to look forward to on Friday. Usually, the Canadian employment figures are overshadowed by the more closely-followed US non-farm payrolls report as they are both usually released simultaneously. But with US jobs report being released last Friday, the Canadian employment numbers will garner more attention than usual.

Unlike the US, Canadian employment figures have been far less impressive and in 2018 we saw a very mixed overall picture. But the trend since the second half of last year has been more positive, with notable increases in jobs in September (+63,300) and in November (+94,100), although October and December saw only moderate increases. Did the positive trend continue in January?

Ahead of the US ISM services PMI (today) and Canada’s jobs report (Friday), the USD/CAD has remained largely downbeat and was still holding below the 200-day moving average (1.3170), hovering just ahead of 1.31 at the time of writing. While the breakdown looks bearish, it is important to note that the previous attempts to take out the 200-day average had proved futile (see the chart). So, if we see a rise back above the 200-day moving average now, this could trigger another rally. Indeed, the bulls would argue that price is still holding above the long-term pivotal level of 1.30 and that we haven’t even seen a relatively-shallow 38.2% retracement against the 2017 low. 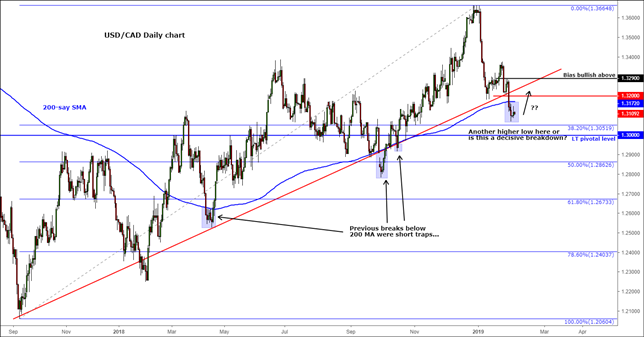