USD/CAD: Meet the New NAFTA, Same as the Old NAFTA

That’s definitely the case when it comes to USD/CAD. On Friday, we highlighted the big rally in oil prices and decent GDP data pushing the loonie higher, but the proverbial “elephant in the room” for Canada has been the ongoing NAFTA negotiations. Over the weekend, rumors emerged that the US, Canada, and Mexico were close to finalizing a trade deal, and those rumors were confirmed with today’s announcement of the USMCA (US-Mexico-Canada-Agreement).

The agreement, which still needs to be finalized by leaders of the three countries in late November (and as a result, is unlikely to be ratified by Congress until early next year), makes relatively modest adjustments to the current NAFTA framework. In exchange for exemptions from future tariffs on automobiles, Mexico agreed to increase local content requirements and labor standards on some manufactured goods, while Canada made small concessions on its dairy policy. The agreement is set to run for a 16-year term, with a review of its efficacy and an opportunity to extend the deal after six years.

Close followers of the negotiations will note that this agreement is not substantially different than the original NAFTA deal….and that’s exactly the point. In essence, President Trump dropped his hard-line protectionist threats in exchange for relatively minor concessions so that he could claim victory, and the ultimate impact on the economies of the US, Canada, and Mexico will be minimal. As Trump himself stated during a victory-lap speech at the White House earlier today, “Throughout the campaign, I promised to renegotiate NAFTA, and today we have kept that promise.”

The tertiary targets of Trump’s trade ire (namely, the EU and Japan) may now look to pursue a similar tactic: offer the US some token concessions, allow Trump to declare himself dealmaker-in-chief, and move on to focusing on other policies. China, however, has long been a target of Trump’s anger, so a similar agreement on that front looks unlikely in the near future.

When it comes to USD/CAD, the minor renegotiation of NAFTA is the best outcome market participants could hope for, and as a result, the loonie is the strongest major currency on the day. Crucially, 2-year yields on Canadian bonds have surged to a 10-year high and the market-implied odds of a rate hike from the Bank of Canada later this month have risen to 95%.

Technically speaking, USD/CAD has sliced through 38.2% Fibonacci retracement support near 1.2900 to hit a fresh four-month low. While rates could see a bounce off the bottom of the established bearish channel, traders will favor selling any near-term rallies, with the next major level of support coming in around 1.2725. 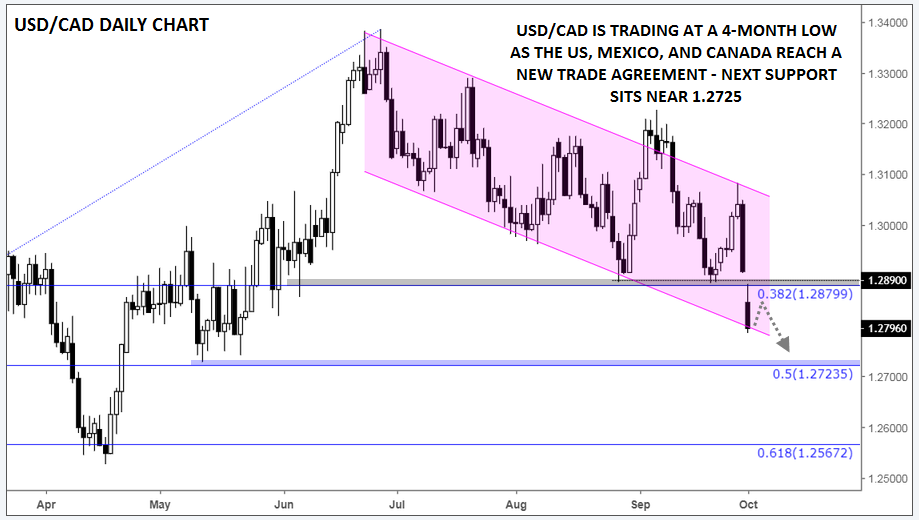