USD/CAD Pulled Back from 17-Year Highs Last Week, but Bulls Remain in Control

When it comes to the FX market, no major currency is more correlated with oil prices than the Canadian dollar.

Amidst the ongoing spread of COVID-19 over the weekend, with global cases reaching 740k+ and poised to eclipse 1,000,000 this week, risk assets are mixed in Monday’s trading. After a slightly bearish close for Asian indices, European and US stock markets are in positive territory. Gold is ticking lower, though Treasury bonds still remain in high demand, with the benchmark 10-year treasury yield falling 5bps to 0.64% as of writing.

Without a doubt, today’s most interesting move is in the oil market, where WTI is trading down -5% to flirt with an 18-year low below $20. Even news that US President Trump would be calling Vladamir Putin to discuss oil prices (a potential precursor to convincing Russia and/or Saudi Arabia to cut production) failed to push prices back higher.

When it comes to the FX market, no major currency is more correlated with oil prices than the Canadian dollar. Therefore, it’s not surprising to see that the loonie is the weakest major currency on the day, and the move is particularly pronounced against the US dollar, the day’s strongest major currency, with USD/CAD rallying over 1.4% already: 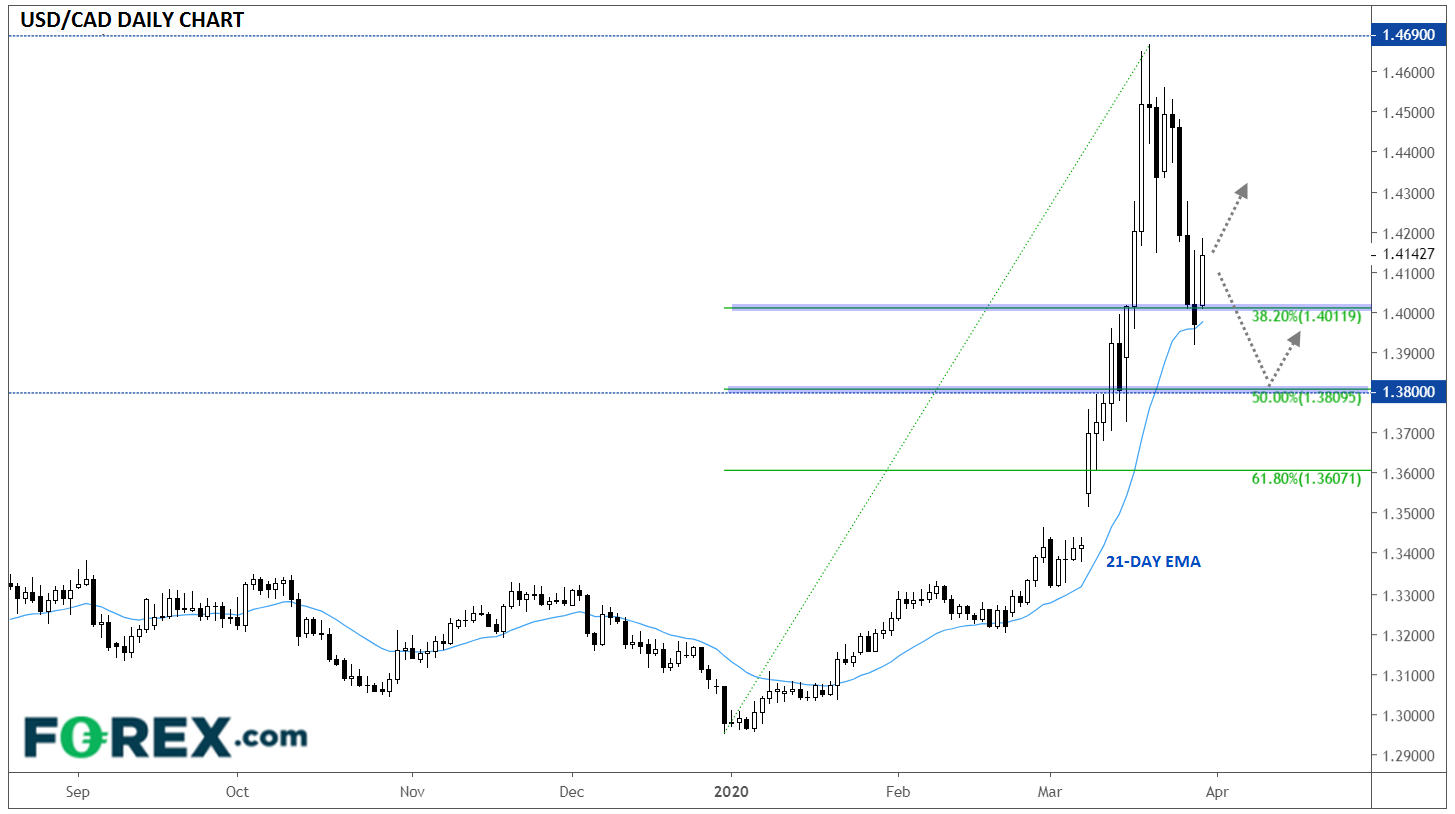 Looking ahead, the recent trends in both oil prices and the loonie itself point to the potential for more strength in USD/CAD this week. Despite a nearly 600-pip peak-to-trough drawdown last week, the pair has still only retraced about 38.2% of the year’s rally, signaling that buyers remain in control for now.

With rates bouncing off both the 21-day EMA and 38.2% Fibonacci retracement, there’s a chance USD/CAD has already seen a near-term bottom form, but if that level breaks, bulls may look to buy near 1.3800, the 50% retracement of the Q1 rally and previous-resistance-turned-support from the May 2017 high. Meanwhile, intraday bulls may want to watch the retracements off the mid-March high for near-term resistance, while the 17-year high near 1.4700 may also provide strong resistance if reached.