The USD/CAD could be on the verge of another move higher. Not only has the US dollar resumed its bullish trend following the FOMC meeting last night, but the price of crude oil has been falling in recent days, eroding the value of the positively-correlating Canadian dollar, while equities have been struggling, which is normally a bearish sign for commodity dollars.

The USD/CAD could be on the verge of another move higher. Not only has the US dollar resumed its bullish trend following the FOMC meeting last night, but the price of crude oil has been falling in recent days, eroding the value of the positively-correlating Canadian dollar, while equities have been struggling, which is normally a bearish sign for commodity dollars. It looks like the dollar bears were were positioned for a more dovish FOMC statement yesterday than the one they got. Apparently, they have been forced to cover their dollar short positions, as the implied odds of a 2019 rate cut are now down near 50% from around 75% it reached at one point yesterday.

Looking ahead, Speculators that trade the dollar (hint: everyone), will turn their focus towards the US non-farm payrolls report, which comes out tomorrow. This has the potential to move the US dollar in one or the other direction in a meaningful way. Headline jobs growth surpassed expectations last month but wages data disappointed. But if we now see a sudden pick up in wages, then this could boost the dollar further. However, all bets would be off should we see a very disappointing jobs report. Watch out for my colleague Matt Weller’s NFP preview article later today and NFP webinar tomorrow.

From a technical point of view, the USD/CAD has been printing higher lows ever since early February when it created a low at just below 1.3070. The long-term 200-day moving average provided support then after a temporary break below it. The USD/CAD has since moved away from the 200-day MA, thus signalling improved short-term bullish trend. In fact, price is now residing above the 50 and 21-day moving averages as well. All these three moving averages have positive slopes, objectively telling us that the trend is indeed bullish.

The bulls will be encouraged to see the USD/CAD trade above the triangle breakout level at 1.3390ish again. So long as the USD/CAD holds above this level on a daily closing basis, the short-term bias would remain bullish. As such, we expect the USD/CAD to climb above the most recent and April high at 1.3520ish in the coming days, assuming we don’t have a poor NFP report on Friday that could derail the US dollar’s rally. The next potential resistance beyond this level comes in around 1.3570, the point of origin of the breakdown back in early January. 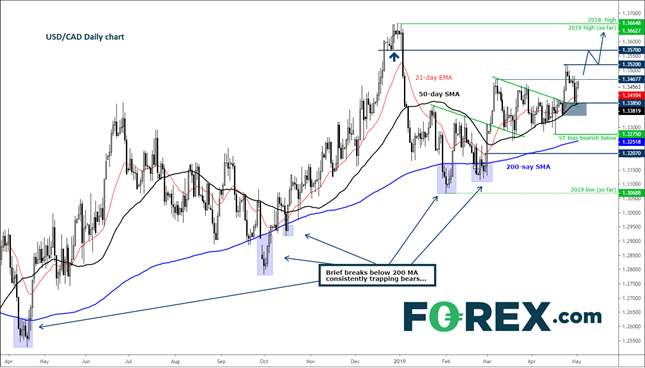