As we had anticipated in our previous USD/CAD report on Monday of last week, the North American currency pair’s rebound was indeed temporary.

As we had anticipated in our previous USD/CAD report on Monday of last week, the North American currency pair’s rebound was indeed temporary. The US dollar fell on the back of mixed-bag economic data while the surge in oil prices helped to underpin the Canadian dollar. Given that net short positions in the CAD had reached lofty levels, it is likely that speculators may now be reducing those bearish bets, which could weigh further on the USD/CAD as key support levels break. So there is the potential for a deeper pullback inside what still is a long-term bullish trend.

The USD/CAD was testing key support around the 1.36 handle at the time of this writing. Previously this level was resistance. If it manages to break decisively below here, then the unit may drop to test next area of support around 1.35 next.

The bears would not want to see the bulls reclaim the broken 1.3650-65 area of support, which is now acting as resistance. If the bulls reclaim that level then all bets are off. In that potential scenario, I wouldn’t be surprised if the USD/CAD were to climb all the way towards the long-term 61.8% Fibonacci retracement level at 1.3835/40 or even higher towards 1.40s.

So, we are taking it from one level to the next. As things stand, the sellers appear to have control in terms of the short-term direction. 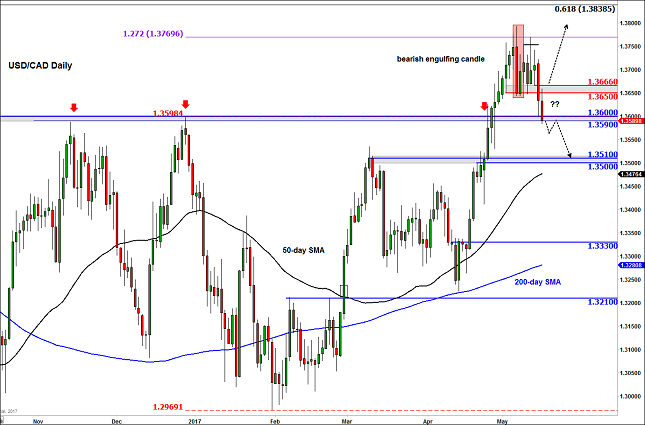