If there is one dollar pair which could actually rise tomorrow, regardless of the outcome of the jobs report, it would most likely be the USD/CHF.

The leading indicators for US nonfarm payrolls report have been mostly weaker than expected, not least the employment component of the ISM non-manufacturing PMI, which was released earlier today. Consequently, a headline NFP figure of anything more than 200,000 would come as a real surprise tomorrow. Of course, the focus will also be on the average hourly earnings index, which is seen rising another 0.3% month-over-month. This, too, looks optimistic given the recent soft patch in US data. However, most of the bearish news for the dollar may already be priced in, so it remains to be seen if the greenback would necessarily fall further should the jobs figures disappoint expectations tomorrow.

If there is one dollar pair which could actually rise tomorrow, regardless of the outcome of the jobs report, it would most likely be the USD/CHF. At the time of this writing, the Swissy was trading flat on the day despite the slump in the dollar elsewhere (except against GBP, which fell sharply in the aftermath of the BoE’s latest policy ‘decision’). The Swiss franc has depreciated sharply in recent weeks, most notably against the euro. But it has also fallen versus the dollar. The number one reason for the franc’s weakness is the Swiss National Bank’s current monetary policy, which is probably one of the loosest in the world as they charge negative interest rates of 0.75 per cent (but there is no QE). In addition, the ongoing rally on Wall Street means demand for the perceived safe haven currency has fallen.

From a technical point of view, the USD/CHF continues to print bullish price action. After that breakdown attempt below the 2016 low at 0.9445 failed last month, several broken support levels have since been reclaimed, including the 0.9555 level. Today saw the USD/CHF weaken slightly but at the time of this writing it had bounced back to where it had opened the session. Any strength in US data or for whatever reason the dollar manages to catch a bid, the USD/CHF would probably be the first USD pair to strengthen, given its performance during a period when basically all the other dollar pairs have fallen. If the bullish trend continues as we expect, then our next immediate bullish objective would be at 0.9750, followed by the Fibonacci retracement levels shown on the chart. We would drop our bullish bias in the event it breaks back below the 0.9555 pivotal level, or if it forms a distinct reversal pattern at higher levels. 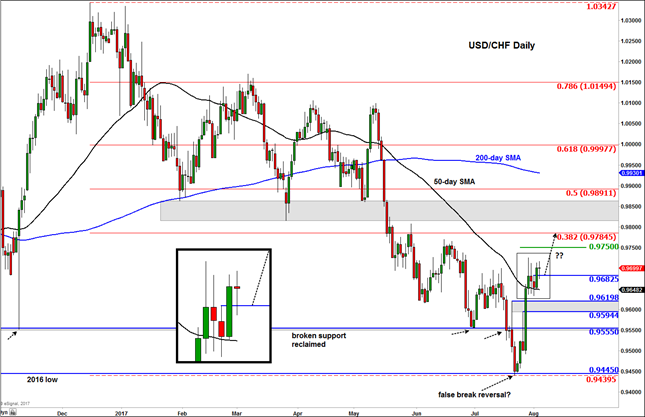