Although slightly higher today, the perceived safe-haven Swiss franc has been repeatedly hitting new lows on the year against the US dollar, despite the recent stock market sell-off.

Although slightly higher today, the perceived safe-haven Swiss franc has been repeatedly hitting new lows on the year against the US dollar, despite the recent stock market sell-off. In large part, this has been because of the growing disparity between the Swiss and US monetary policy stances. Whereas the Federal Reserve is on a hiking cycle, the Swiss National Bank is still charging negative interest rates on deposits and continually warns about intervening in the FX markets to keep the franc weak. The Swiss economy has been growing very gradually over the years with inflation being low and stable around 1 percent. In contrast, the US economy has been growing more robustly with employment at full potential and inflation being much hotter.

So, the fundamentals have been supporting the USD/CHF and it may get another shot in the arm should US CPI (0.3% m/m) beat expectations tomorrow or in the event investors’ appetite for risk improves again. However, if the stock markets were to turn ugly, then you’d think the franc would find some safe-haven flows. In this potential scenario, we would wait for confirmation that the USD/CHF has created a short-term top before turning bearish on it.

For now, though, the technical outlook on the USD/CHF remains bullish despite its retreat today. After all, price is currently residing above its key daily moving averages such as the 21, 50 and 200, and in that order. What’s more, these moving averages all have positive slopes. Furthermore, the USD/CHF is currently well above the 2018 opening level and has recently made a higher high after forming a couple of higher lows.

Given the above considerations, we are expecting to see further gains for the foreseeable future until and unless the USD/CHF breaks its bullish market structure or forms a distinct reversal pattern at higher levels first.

The next short-term support levels come in around 1.0085 followed by 1.0040. The next big bullish objective is the liquidity that would be resting above highs of 2016 and 2017 at around the 1.0335/45 area. Ahead of this major bullish target, there are several other technical levels that could provide at least short-term resistance. Among them is the 1.02 handle which comes in 10 pips below the 127.2% Fibonacci extension level of the most recent downswing.

Meanwhile the short-term bullish structure of price will be invalidated in the event price breaks below its most recent low at 0.9955. If this potential scenario is realised, then the USD/CHF could easily go on to drop towards its 200-day moving average around 0.9850, or even lower.

So, monitor price action closely, especially around the shaded region on the chart, for signs of bullish price action. However, if the bulls fail to show up here, perhaps because of raised stock market volatility, then this could be a warning sign for a potential sell-off. Even so, we would only turn bearish if price breaks below the most recent low at 0.9955. 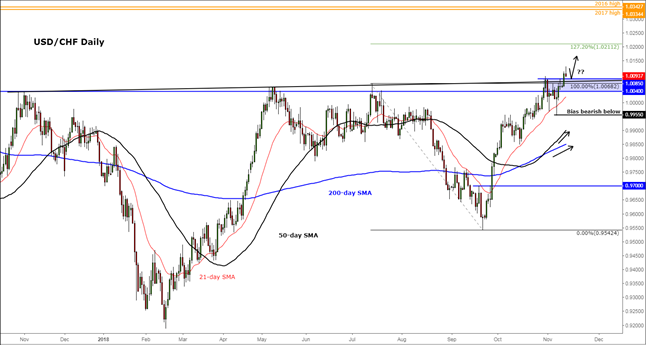