The big story of yesterday in the FX markets was the big breakout in the dollar following the Federal Reserve’s rate decision the day before.

The big story of yesterday in the FX markets was the big breakout in the dollar following the Federal Reserve’s rate decision the day before. The dollar’s rally has been a swift one. Almost everything has fallen against the buck: gold, euro… pound. The Canadian dollar was the only exception and it was again holding its own relatively well at the time of writing today. The buck has done particularly well against currencies where the central bank is still dovish, namely the Japanese yen and the Swiss franc. The falls in these currencies were exacerbated by the fact yesterday was another “risk on” day, with equities rallying sharply in Europe and gold falling.

Today, however, European stocks have fallen across the board in response to news that the Italian government has agreed to set a higher-than-expected budget deficit target (2.4% of GDP for the next three years), which has the potential to upset Brussels. Italian banks have taken the brunt of the sell-off thanks to their large holdings of sovereign bonds. Although the risk-off trade in equity markets has led to the Swiss franc strengthening against the euro, it was little-changed against the dollar at the time of writing.

Despite today’s pause in the rally, the USD/CHF has already confirmed its reversal following yesterday’s big breakout. The bullishness was indicated a few days ago by the formation of that doji candlestick formation at around 0.9550 (circled). Thus, the clean break above old high at 0.9700 yesterday is more or less the confirmation many bulls were waiting for to see. Given the size of yesterday’s rally, rates are understandably a little overbought. So we are seeing a little bit of a hesitation here. But this could be a minor setback and before long the rally may resume. In any case, the path of least resistance is clearly to the upside now and will remain that way until we see the formation of some distinct bearish price pattern.

Meanwhile on the downside, this year’s opening level and the 200-day moving average converge around 0.9730, below which there’s nothing significant until the base of that breakout at 0.9700. This level now needs to hold if the buyers are to remain in control. 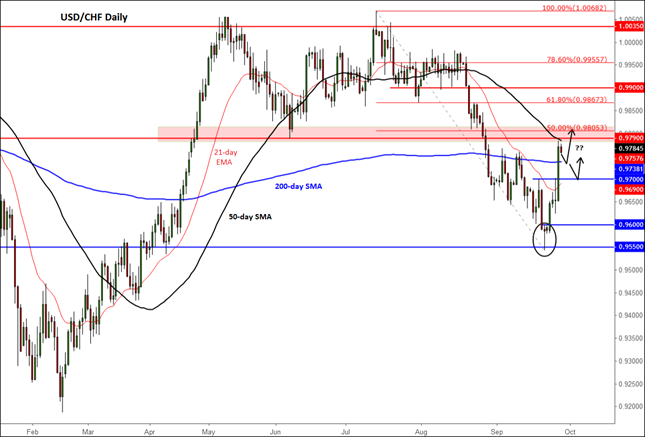