USD/JPY: another day another (weaker) dollar

At the time of this writing the US dollar was a touch firmer against the likes of the euro and the Aussie, but lower versus the pound and yen, leaving the Dollar Index basically flat, but below that critical 100 level. So far, there are no signs of a comeback for the greenback. It sure wasn’t helped by the fact that unemployment claims showed a surprise increase last week. Apart from a few Fed speakers, there isn’t any significant US data scheduled for the remainder of this or next week to change the dollar’s current trend. So, the US currency may drift further lower. Any potential bounces should be taken with a pinch of salt, unless there is a clear break in the downtrend structure.

The dollar’s relentless selling saw the USD/JPY finally break below key support around 111.55/75 at the start of this week. It has since held below this area, which suggests further technical follow-up selling could be on the way. The sell-off has paused for breath around 110.75-111.15, an area which was previously support and resistance and ties in with the 38.2% Fibonacci retracement level against the low from last year. But if the USD/JPY were to break below this support region, which is our base case scenario, then the next stop could be around the 108-109 area. This is where the support trend of the bearish channel meets the 50% retracement level and the 200-day moving average. In addition, the point D of an AB=CD price move completes there. Thus, as a minimum, we should expect to see a bounce if the USD/JPY were to get there. But there’s an even stronger level of support further lower around 1.0650/80 area, as this was the last resistance prior to the breakout and it also ties in with the 61.8% Fibonacci retracement level. It is here where it is more likely that may see a bottom on the USD/JPY, though there is also a good chance for this to happen around the 200-day average.

But it is far too early to say anything technically bullish about the USD/JPY with a high degree of confidence, even if we remain fundamentally bullish on this par. Thus, for now, the bulls appear to be losing control of the trend. However, if they somehow manage to push the USD/JPY back above the broken support at 111.55/70 area then that could lead to a short-covering bounce, possibly towards the top of the bearish channel. The long-term bullish trend would only be re-established in the event the USD/JPY breaks out of the bearish channel to the upside. 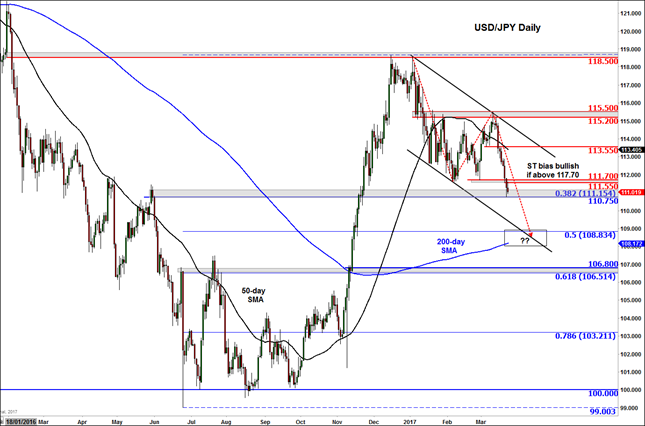