USD/JPY coiling for a bullish breakout

On the surface, the USD/JPY’s long-term weekly chart looks bearish. After all, it has been putting in lower lows and lower highs since it peaked out in June 2015.

On the surface, the USD/JPY’s long-term weekly chart looks bearish. After all, it has been putting in lower lows and lower highs since it peaked out in June 2015. More recently, it made a high just below 114.50 in July this year, which led to a sizeable move down to 107.50 long-term support. But here, the USD/JPY formed a false break reversal pattern, which triggered the latest rally. This rally has now stalled. Ahead of the Japanese general election, due to take place on October 22, the yen has been firming up, finding additional support from geopolitical uncertainty. Meanwhile the US dollar has simultaneously been hit by weakness in US employment data and ahead of CPI this Friday.  But is the USD/JPY coiling for a big bullish breakout, anyway?

Many speculators would probably look at last week’s doji candle as a sign that the long-term downtrend has resumed. And to be fair, they could very well be correct. But, with the recent trend of USD/JPY being bullish and after the formation of that false break reversal at 107.50 key support, not to mentioned the break above 21-week moving average or the short-term bearish trend line, I think the USD/JPY is poised for a potential bullish breakout rather than a breakdown.

Specifically, I will be looking for new signs that the sellers are getting trapped again. One very obvious level to watch in this regard would be last week’s low at around 112.40. It is likely that some speculators have sold the break below this level already, after last week’s bearish-looking doji candlestick was formed. Thus, any move back above 112.40 will make the sellers sweat a little. A logical location where their stop loss orders might be resting would be above last week’s high at 113.45. These orders represent a pool of liquidity. Thus, if I am correct in my thesis, the USD/JPY could move to above this 113.45 level in the coming days, possibly ahead of an even larger rally in the coming weeks.

That being said, it is far too early to turn decidedly bullish on the USD/JPY, especially given the uncertain outcome of US CPI on Friday. But once we see short-term bullish price action and evidence that the sellers are being trapped, then we could see the onset of a potentially big rally nonetheless. Still, in the short-term, this view would be invalidated if the week closes below 112.40. If so, we could see a pullback towards the next support around the 111.00 area next. Even in this scenario, my long-term bullish view would not necessarily become invalidated, but we will reassess the situation if and when we get there. 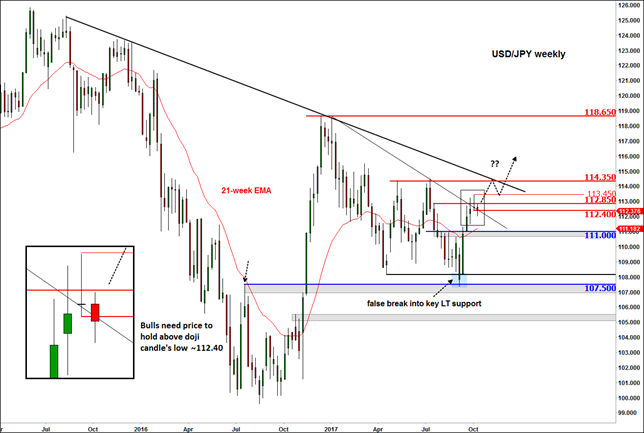