Last week saw four major central banks announce their policy decisions. Among them, the Bank of Japan remained quite dovish while the US Federal Reserve and Bank of England leaned surprisingly more towards the hawkish side.

Last week saw four major central banks announce their policy decisions. Among them, the Bank of Japan remained quite dovish while the US Federal Reserve and Bank of England leaned surprisingly more towards the hawkish side. The dollar and pound showed moments of strength while the yen weakened across the board. But after a busy week of fundamental events, this week is set to be a quieter one in terms of economic data and central bank meetings. Thus it could be a week of range-bound price action in many FX pairs, but with the subtle central bank policy changes that have been announced over the past couple of weeks, the US and Canadian dollars and the British pound should, in theory, strengthen further while the yen (and possibly the euro) could weaken, especially if sentiment towards risk remains positive. So far, there has been no clear indication that sentiment has turned bearish. Investors are no doubt feeling secure knowing that monetary stimulus continues to be provided from the European Central Bank, Bank of Japan and People’s Bank of China.

So, because of a dovish BoJ and hawkish Fed, and ongoing “risk-on” sentiment, we could see the USD/JPY extend its gains going forward. In fact this pair has already made some technical progress on the bullish side: the false break and gap fill at 109.10 may be an indication that the selling had exhausted and that it may be time for the trend to turn bullish. Now above the old resistance area of 110.25-80, which also includes the still-rising 200-day moving average, the path of least resistance is to the upside, at least in the short-term anyway. Consequently I am expecting the USD/JPY to rise in the coming days towards previous reference points such 112.10 and 113.30 and possibly a lot higher over time. But a potential break back below 110.25 at this stage would not be ideal for the bulls and I would drop my bullish bias completely in the event of a subsequent break below 108.80/5 – the low from last week. 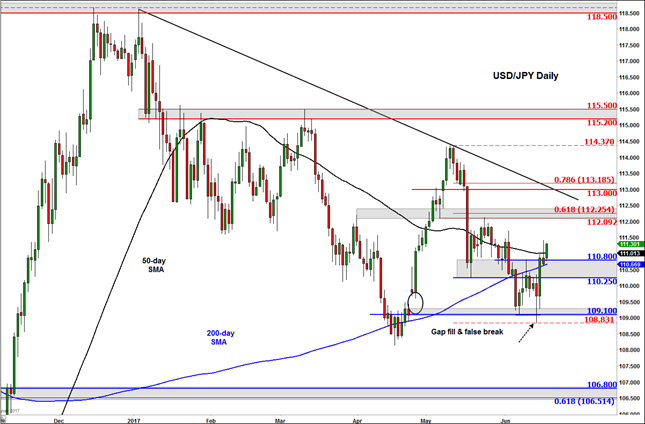