Since peaking at just over 125.00 in June 2015, the USD/JPY has been trending lower ever since. This has been highlighted by the series of lower highs and the corresponding long-term bearish trend line which can be seen on the weekly chart, below. But the bearish momentum faded sharply in August 2016 when it found significant support around the 100.00 level. However, that burst of momentum faded again at the trend line, preceding a series of lower lows. The last low in these series of lower lows which was made at around 105.00 – hit earlier this year – was still above the 2016 low of 100.00. Thus, a significant higher low was potentially formed. But for this to become a valid higher low though, the USD/JPY now needs to make a higher high above 114.70. Standing on the way of this level are several resistance levels that are now approaching or being tested, and THAT long-term bearish trend line. Thus, the higher low around 105.00 is a potential higher low for the time being. For all we know, the USD/JPY could very well turn lower again and move below 105.00, and who knows, the previous swing low at 100.00 as well. Given the long-term bearish trend and the lower highs, we are now on the lookout for a bearish sign to emerge on the lower time frames – such as a bearish engulfing candle or inverted hammer on the daily chart – around these levels. The USD/JPY has already entered the lower bound of the resistance zone at 110.85 (old support and 61.8% Fibonacci level). Short-term support comes in at 110.00, followed by 107.80, levels that were formerly support and/or resistance. 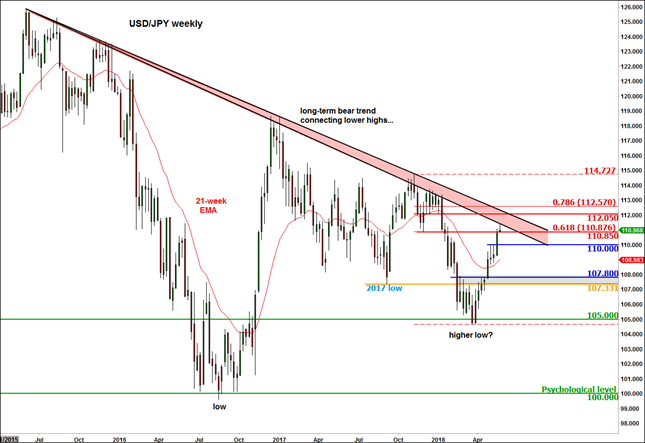