USD/JPY relinquishes BOJ-related gains; could the Fed come to the rescue?

The fact that Japan is currently stuck in a deflationary spiral and that the BoJ has promised to overshoot its 2 per cent inflation target by purpose means that QE will be here to stay for potentially a much, much longer time than was previously the case. Investors will no doubt question the central bank’s credibility but if inflation expectations begin to rise then their worries should lessen. To be fair, it is not the BoJ’s fault as they have thrown the kitchen sink at the problem. Supply is not the problem, it is demand – or lack thereof – for loans that is the issue here. Monetary policy can achieve so much and its effect on the real economy has diminishing returns.

In contrast to the BoJ, the Fed wants to tighten its policy. But they will surely want to avoid doing so at this particular meeting.  In light of the BoJ’s new form of policy easing that was announced today, a rate increase from the Fed would theoretically put significant upward pressure on the USD/JPY, which is not good for US exports to Japan. But regardless of the actions of the BoJ, the Fed was always expected to hold off hiking rates until December anyway. After all, the US Presidential election is a key event risk on 8th November. Therefore a big surprise would be if the Fed does actually raise interest rates today.

In the more likely scenario if the Fed remains on hold, this does not necessarily mean the dollar will fall off a cliff, as I have repeatedly warned. After all, this scenario is mostly priced in. What’s more, the Fed remains the only major central bank looking to raise rates anyway. So, whichever way you look at it, the dollar appears poised to rise rather than fall in the foreseeable future, while stocks should remain supported in light of the on-going support – in the form of either QE and/or low and negative interest rates – from central banks across the world. It should be pointed out that even if the Fed raises interest rates, this will not materially change our long-term bullish outlook on US stocks or USD/JPY.

As far as the USD/JPY is concerned, the key level of support at 100.55/65 area, where two Fibonacci levels converge: the 78.6% retracement against the August low (point X to A on the 4-hour chart) and the 127.2% extension of the most recent corrective upswing (from point B to C). In other words, this is a bullish Gartley pattern, provided that the low from August at 99.55 holds as support. In fact on the monthly chart, it can be observed that the USD/JPY is testing a significant support area around the 100-101 area. So there is a strong possibility that we may see a bottom for the USD/JPY today. However if the August low breaks on a closing basis then we won’t be surprised to see further weakness in the days and weeks to come, possibly towards the next long-term support at 95.00. 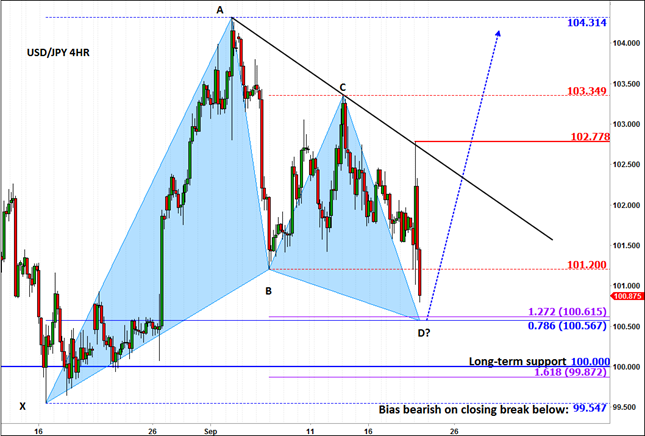 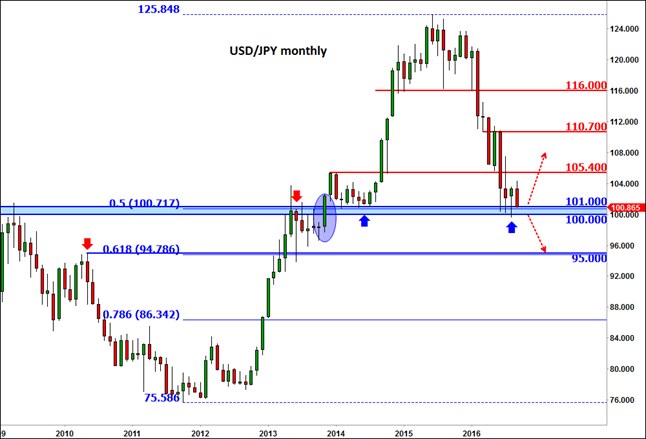