Today’s fundamental data showed slight slowdown in US growth, though the world’s largest economy is still attracting capital in a classic best-house-in-a-bad-neighborhood trade. Specifically, the ISM Non-Manufacturing PMI reading printed at 56.7, just below the 57.1 reading expected by economists and down from last month’s 58.0 print.

Delving deeper into the report, most subcomponents saw slower growth than last month, with many respondents citing uncertainty around the government shutdown as a major concern. New Export Orders saw their biggest decline (-9 points) to the worst level in two years, underscoring concerns about global trade. That said, the Employment subcomponent of the report rose a point to 57.8, supporting the strong jobs report from Friday (see “NFP Instant Insight: Strong Jobs Report Not Enough to Bring “Patient” Fed Off the Sidelines” for more).

The US dollar quietly tagged its highest level of the year against the Japanese yen above 110.00 yesterday, though rates have spent the last 24 hours consolidating around that key psychological level. Late last week, the pair formed a small “Morning Star” candlestick pattern, signaling a shift from selling to neutral to buying pressure and marking a possible near-term low near 108.50.

Moving forward, traders will key in on tonight’s State of the Union speech from President Trump for any market-moving tidbits, specifically around US-China trade negotiations, the prospect of another government shutdown next week, and of course, the wall along the Southern border. Beyond that, there’s little in the way of scheduled economic data, so USD/JPY’s price action may be driven by flows in the equity market. 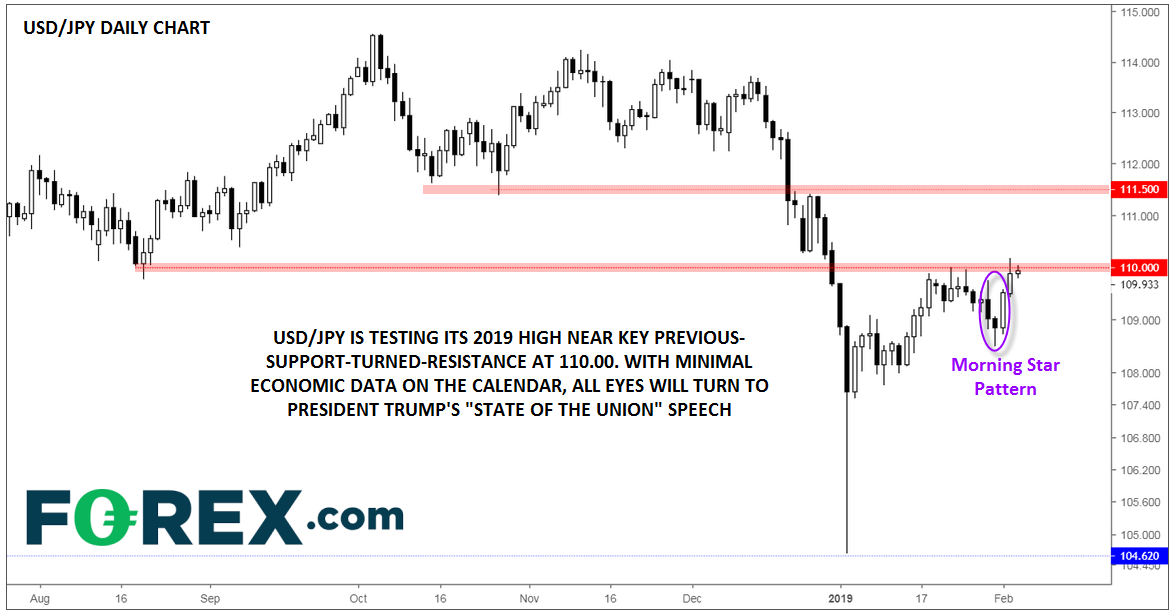