Week Ahead: Beginning of End of Trade War and Brexit?

Economic data will be winding down as year-end approaches, although there are still a few important events scheduled for next week.

Economic data will be winding down as year-end approaches, although there are still a few important events scheduled for next week. Investors certainly seem to be in a buoyant festive mood as we head towards Christmas. The US and China finally agreed to a phase one trade agreement, which will be signed when the two sides work through the legal process. On top of this, political uncertainty has receded in the UK with the Conservatives winning majority of the votes in Thursday’s election.

Here are the highlights of what’s coming up over the next 5 and half trading days:

Other important macro events this week:

So, there should be lots of news-driven moves for currencies of the above nations. Outside of the above economic data releases, further developments in the US-China and Brexit situations will likely move the markets.

Following the Tories’ big win in the elections, further delays to Brexit look unlikely now, meaning households and businesses can plan accordingly – this is exactly why the markets have reacted in the way they have, with both the pound and FTSE rising sharply, before profit-taking saw the pound gave back a sizeable chunk of its overnight gains on Friday. The pound could see short-term dips being bought next week as traders continue to price in the prospects of UK’s softer exit from the EU. But the longer-term outlook remains murky given that negotiations on trade haven’t even started yet – and a lot could go wrong.

The US-China trade optimism continued to drive stock prices higher this week, although markets were struggling to hold onto their gains on Friday after China confirmed that they had reached a consensus on the text of phase one trade deal with the US, and that they will work on setting a date for signing it. China said it will boost US imports of energy, agriculture, pharmaceutical products and financial services. This comes after President Trump approved the terms of the phase one trade deal and suspended the additional 15% tariff on Chinese products that were set to go live on Sunday. The US will also cut existing duties on another $120 billion in imports to 7.5%. However, it will leave 25% tariffs on $250 billion in place.

The latest trade development is certainly a big deal for the markets given how important China is to the global economy, not least the Eurozone where shipments to the world’s second largest economy have been hit hard. So, a partial trade deal should alleviate some of the growth concerns. However, it should be noted that the markets have been pricing in such an outcome for a while now. Thus, the move should have been priced in. It will be interesting to see how much further the US markets will rally on the back of this next week. I have a feeling, not very much. But the European markets could play catch-up, not least the FTSE, with Brexit uncertainties receding somewhat (see chart below). The focus will now turn to phase 2 of the deal, which according to Trump will begin immediately. Negotiations for phase two deal will depend on the implementation of phase one deal, says China. This could be another long, back and forth, type of a situation, keeping investors on their toes. The issue of intellectual property theft may prove very difficult to resolve.

So, we are far from seeing the end of the trade war, but it could be the beginning of the end. The same could be said of Brexit. Perhaps it is time for the underperforming FTSE to play catch up with the rest of the world. 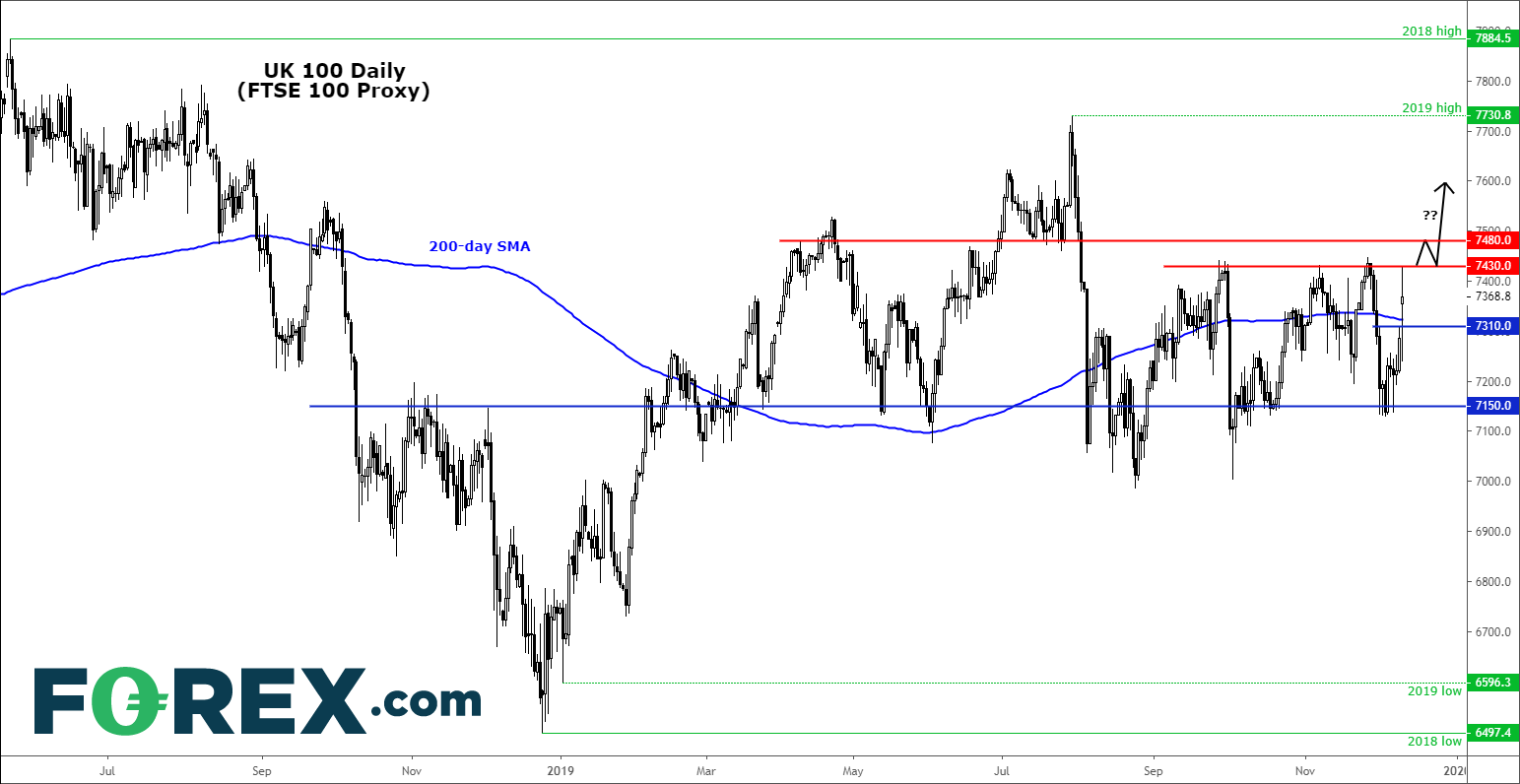