Undoubtedly, the biggest short-term risk event facing investors will be the UK’s parliamentary vote on Saturday.

Undoubtedly, the biggest short-term risk event facing investors will be the UK’s parliamentary vote on Saturday. MPs must decide whether to approve Boris Johnson’s Brexit deal or risk plunging Britain further into political crisis. Their decision could shape the future of the UK’s relationship with the EU, but more to the point the markets could very well open with large gaps on Sunday night. As such, traders may wish to reduce their exposure or hedge in order to reduce the risk of markets gapping against them. Next week we will also have a few other events that could cause volatility to stir, including an election in Canada, the ECB’s rate decision and a couple of potentially market moving data. But make no mistake about it, Brexit will take centre stage first thing when trading resumes next week.

The pound was continuing to find buyers late in the day on Friday, with investors reacting to some UK media reports that said Boris Johnson had secured enough backing to support his deal. However, what matters is the actual votes in the ‘Super Saturday’ sitting. Here is what my Brexit-expert-colleague Ken Odeluga thinks:

So, the outcome of Saturday’s meaningful vote is likely to be to very tight which makes it more likely that the markets will react. Read more HERE.

How will the markets react to Saturday’s vote?

Well my colleague Fiona Cincotta reckons it will be something like this:

I can’t disagree with her on both fronts – although I will go a step further to say that it won’t just be the pound and the FTSE that will be impacted. Instead, risk assets across the board may gap at the Asian open.

With recent polls suggesting Justine Trudeau’s approval rating is hovering around record lows, the incumbent Prime Minister looks vulnerable against Conservative challenger Andrew Scheer. The race could not be tighter. The winner of the Canadian election may well have to form a coalition with smaller parties in addition to working with a fragmented Parliament, writes my colleague Matt Weller. To find out what their economic policies may mean for the Canadian dollar and the economy more broadly, click HERE.

Next week is light on the data front, although Thursday could be an interesting day with eurozone PMIs and the European Central Bank rate decision to look forward to.

It will be Mario Draghi’s last policy meeting as the head of the ECB and having just re-introduced QE at the last meeting he will likely go out with a whimper. The euro has actually appreciated since the ECB’s last meeting, partly because of Brexit optimism and also due to a weakening dollar. In addition, raised hopes over a US-China trade resolution, which could boost Chinese demand for Eurozone exports, has also supported the single currency. Furthermore, several ECB policymakers have criticised Draghi’s renewed bond-buying programme and called for a change of strategy when Christine Lagarde takes over next month. The probability of further policy loosening has therefore fallen.

Meanwhile corporate earnings will come in thick and fast next week, too. Among the corporate highlights Microsoft will publish its results after the markets close on Wednesday, while from the UK banking giants Royal Bank of Scotland and Barclays will provide their updates on Thursday and Friday respectively. Meanwhile, the US earnings season is beginning to provide some useful glimpses into where real oil demand is positioned. Read more HERE.

For obvious reasons, the cable and pound crosses will be in focus in early next week. Watch out for gaps and potential gap fills later as price hovers near important long-term pivotal level of 1.3000. 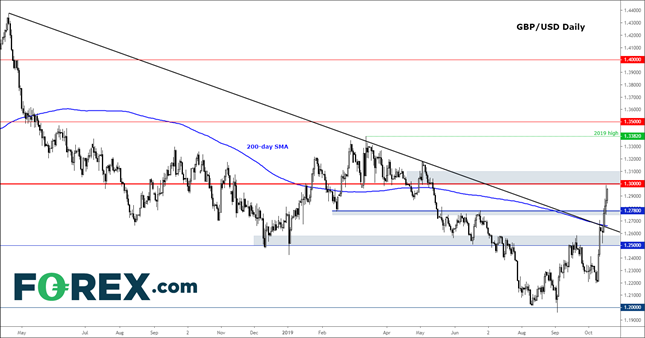