After a big fall in the stock markets on Monday and an equally sharp recovery in the days that followed, next week could be a quieter one on Wall Street, especially with the earnings season also dying down. There are no major central bank meetings either. Investors’ attention will return to global data, although the US-China trade situation will likely be the primary focus - especially if the People’s Bank of China continues to devalue the yuan.

Next week we will have top tier data from Australia, China, the Eurozone, UK and US. Here are some of the data highlights:

US dollar will be in focus again

After the Federal Reserve loosened monetary policy last month, the implied probability of a follow-up rate cut in September has fluctuated noticeably this week as investors responded to incoming data and the escalation in US-China trade spat. In addition, President Donald Trump again criticised the Fed for acting too slow after the PBOC allowed the yuan to drop below 7 per dollar and as central banks of New Zealand, Thailand and India all cut their respective interest rates, with the RBNZ doing so more aggressively than anticipated. The probability of at least one rate cut in September went to 100% from around 80% previously, with the odds of a 50 basis-point cut rising to about 20% according to the CME’s FedWatch tool. With market participants so sure of another rate cut, the upcoming US (and global) economic data will be very crucial over the next 40 days or so. In the upcoming week, we will have CPI inflation, retail sales and industrial production among several other US macro pointers. So, the September rate cut odds should change again in response to these numbers and that in turn could see the dollar move sharply.

Global macro and geopolitical concerns could come to the forefront

In addition to fresh US data, there will be some very important macro pointers from China, Germany and the Eurozone to look forward to as well (see the calendar highlights above). If the data in these regions remain soft, then expect to see fresh falls in safe-haven bond yields, which could have repercussions for the wider financial markets.

Meanwhile, the US and China’s trade tussle is increasingly moving towards a currency war after both sides have been engaged in a damaging tariff war with each other over the past several months. After the PBOC allowed the yuan to trade below the key 7-per-dollar level, Trump has evidently endorsed a weaker dollar policy. So, while it is always a good idea to keep track of the changes in fundamental developments, there may be a simpler way of being on top of things right now by watching the USD/CNH exchange rate closely around this 7.00 yuan handle. As there are no signs of US-China tensions easing anytime soon, rates could break further higher – and, in turn, cause more chaos elsewhere, such as the equity markets and commodity dollars. However, if rates were to go back below 7.00 and hold there then that could help to calm nerves as it would indicate China is willing to negotiate. In this potential scenario, risk assets could push higher next week. So, our featured chart for the upcoming week has to be the USD/CNH. 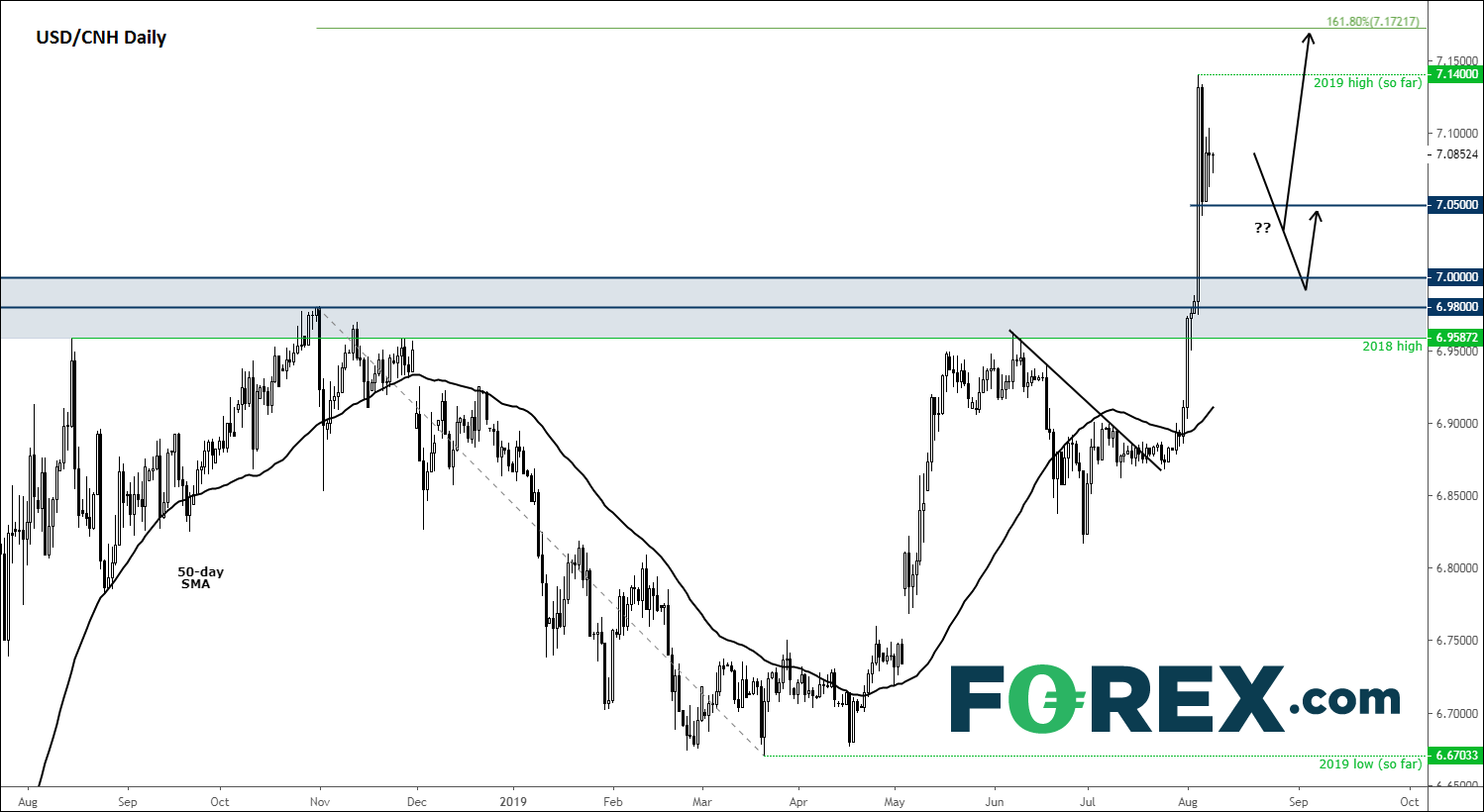