Week Ahead: FOMC, NFP and lots of macro data

Monday will be relatively quieter for data releases compared to the rest of the week, although we will still have the Fed’s favourite inflation gauge, Core PCE price index, as well as personal spending data to provide us clues about the health of the world’s largest economy. After shrugging off a stronger US GDP data on Friday, how will the dollar bulls respond to Monday’s numbers?

Also watch crude prices on Monday after both oil contracts fell sharply on Friday amid profit taking and after US President Donald Trump said he had asked the OPEC to lower prices.

Tuesday will start with important data from China and New Zealand, with the release of official manufacturing PMI data from the former and the closely-followed ANZ Business confidence barometer for the latter. Concerns over Chinese growth eased in the first quarter, but the government’s decision to reduce stimulus measures last week has worried investors that this could negatively impact momentum at the world’s second largest economy. But as far as the now moment is concerned, investors will be keen to find out whether the manufacturing PMI has expanded again after it showed a slight increase last time, which ended a run of three consecutive months of declining activity. Should the PMI fall back below the boom/bust level of 50, this could re-ignite concerns over China again.

Of course, investors have also been very concerned about the lack of growth in the Eurozone, owing in part to weakness in German data over the past several months. Well, the Eurozone ‘flash’ GDP estimate should help to soothe those concerns with a print of 0.3% if analyst expectations are correct. However, anything below that and we could see further weakness for the euro after the EUR/USD broke below the key 1.12 support handle this week.  In addition to Eurozone GDP, we will also have the latest German CPI estimate on Tuesday, providing additional volatility for the single currency.

More North American data will follow later in the day on Tuesday with the release of Canadian GDP as well as US Employment Cost Index and CB Consumer Confidence Index.

Wednesday will be another busy day for fundamental events. Things will kick off early with the release of New Zealand quarterly employment data (late in the day Tuesday for London and US traders), followed by UK manufacturing PMI, USD ADP and ISM manufacturing PMI, and then the FOMC policy decision and press conference late in the dat. No change in US interest rates are expected but it will be interesting to hear what the Fed’s policymakers have made of Q1 data releases in the US, which have shown a mixed performance and overall haven’t been as bad as some had feared towards the end of last year.

Thursday will see release of the Caixin manufacturing PMI data for China, which may not be too significant if the official estimate scheduled for release two days earlier was already shrugged off. Then, it is all about the Bank of England’s “Super Thursday”. The BoE’s updated inflation and growth forecasts in the Quarterly Inflation Report and Governor Mark Carney’s press conference has the potential to move the pound sharply, although with focus being squarely on Brexit, we doubt that it will be a super day for volatility. But then Carney has surprised us before.

Friday is obviously the “NFP day” but before the monthly US jobs report is out, we will have the latest Aussie building approvals, UK services PMI and Eurozone CPI flash estimate to keep traders busy. So, the AUD, GBP and EUR could be particularly busy, especially if the US nonfarm payrolls report shows a few surprises later. Last month, the headline jobs growth surpassed expectations but wages data disappointed. The dollar could come under pressure if the jobs and/or wages data disappoint expectations. Meanwhile, the ISM services PMI will be published after the jobs report is out of the way.

On top of the above macro events, we will also have more company earnings to look forward to next week, including from the likes of HSBC, Lloyds, Shell and BP. From the US, Alphabet is probably the most important one to watch.

So, it will be a rather busy week next week. It is also worth pointing out that although Japan will be out celebrating Golden Week from Saturday 27 April through Monday 6 May, meaning volumes during Asian markets may be quieter than usual, this could create extreme market moves like those we saw in early days of this this year in JPY crosses. So, please be aware of the possibility for flash crashes, and ensure that your risk management strategy is adequate to mitigate or minimise those risks. 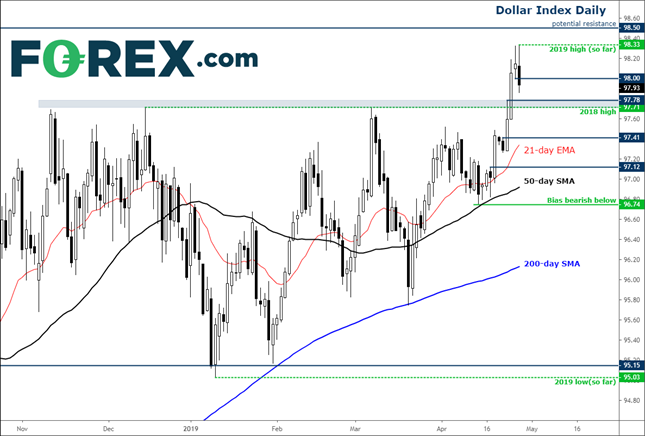