Week Ahead: Growth Concerns and Brexit Key Focal Points for FX and Stocks

The pound is probably where we might find heightened volatility again next week, although the potential is there for the US dollar or the stock markets to actually steal the show – for all the wrong reasons.

The pound is probably where we might find heightened volatility again next week, although the potential is there for the US dollar or the stock markets to actually steal the show – for all the wrong reasons. But in any event, it will be a light week for the economic calendar, which may be a disappointment for those who like to speculate on news.

Equities have come under pressure again owing in part to valuations concerns amid worries that the US economy may have reached its peak growth and concerns how the recent currency crises in emerging markets may have impacted demand. Indeed, two Federal Reserve members today highlighted the downside risks to the US economy and hinted at the prospects of slower rate hikes next year. Fed’s Deputy Chairman Richard Clarida said he is seeing evidence of a slowing global economy and that interest rates were "close to the neutral range,” although still rejected suggestions that the central bank has gone too far, too fast, meaning that a December rate hike is still looming. Fed’s Robert Kaplan, meanwhile, also acknowledged that global growth will be a little bit of headwind and that it may spill to the US economy. Following these dovish remarks, the dollar fell back on Friday, leading to spikes in EUR/USD and Gold, while even the beleaguered GBP/USD bounced back a little.  Meanwhile the USD/JPY slipped along with stock indices.

Light week for data next week

After an eventful week for the pound, some might be keen to find out if there were any significant economic data or central bank meetings scheduled for next week, just so we can focus on something other than the B word. Unfortunately, there are only a handful of scheduled events that could detract attention from UK politics and sterling. These include mostly second-tier US economic data, released throughout the week, while the Eurozone manufacturing and services PMIs, as well as Canadian CPI, will all be published on Friday. Given the recent deterioration in Eurozone data, Friday’s Eurozone PMI data will be monitored closely by market participants who have an interest in trading the euro. The Canadian CPI will of course be important for the CAD, which has actually not had a terrible week given the extent of the oil price sell-off.

It feels like it has been a disastrous week in UK politics over the proposed Brexit agreement. The cable was on course this morning to record its worst weekly performance since the beginning of August, while UK housebuilders and banks – stocks that are most exposed to a disorderly Brexit – also had a torrid week. Theresa May faced a grilling from MPs and journalists on Thursday after a divided cabinet backed her controversial Brexit plan on Wednesday night, leading to numerous ministers – including the PM’s latest Brexit negotiator Dominic Raab – resigning from their posts. Several MPs have already written their letter of no confidence in Mrs May as UK’s Prime Minister and leader of the Conservatives Party, raising the prospects of a snap elections. But the pound’s losses have been contained – for now – as Michael Gove, the environment secretary, has apparently decided against following his fellow Brexiteers out of the cabinet in protest at the May’s Brexit deal which is a huge relief for the embattled PM. Still, a Conservative party leadership challenge looks highly likely, although it is unclear at this stage whether Mrs May will be defeated in the potential confidence vote.

Next week, therefore, the pound will continue to remain in sharp focus and any further deterioration in the already dire UK political situation could weigh further on the pound, especially if Mrs May loses a confidence vote. Even if Mrs May passes the potential confidence vote, sterling could fall sharply if the UK parliament votes against passing the EU Withdrawal Agreement Bill in early December, as then the Government will only have about 21 days to put forward a new plan which would make a no-deal Brexit outcome more likely. However, if it is passed then the pound should stage a relief rally. 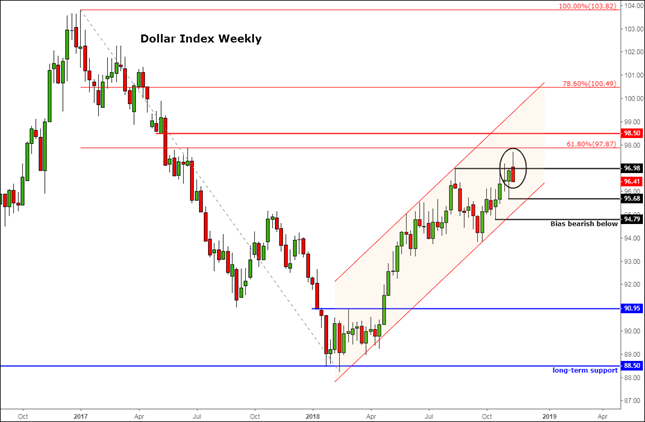