Week Ahead: Have We Seen the Top in Coronavirus Cases?

Has the rate of increase topped on newly discovered Coronavirus cases?

Next week will be a pivotal week in terms of discovering if the rate of increase has topped on the number of newly discovered Coronavirus cases.  China’s National Health Commission said that as of Thursday, the total infection number was 31,161 and the total number of deaths was 636.  However, the Global Times has been reporting that the rate of increase in infection has slowed,  as most current cases have already been tested.  That means we could see a lowering of new cases moving forward.  In addition, they reported that the death rate of coronavirus infections nationwide is 2%, with cities in Hubei, except for Wuhan, declined to 1.3%.  In Wuhan, death rate is near 4.1%.  There have been unsubstantiated news stories that vaccines may soon be available.  Unsubstantiated or not,  markets chose to believe it, and add risk in stocks.  However, commodities such as oil and copper, and commodity currencies such as the Aussie and Kiwi, are still trading need their 2020 lows.  Many companies will reopen on Monday (although many people still encouraged to work from home), and hopes are that this will stem Q1 GDP losses.  Today, S&P revised down their annual growth forecast for China to 5.0% from 5.7%.

With the debacle in Iowa this past week in the Democratic caucuses,  long shot Pete Buttigieg pulled out the top spot with 13 delegates.  Bernie Sanders, Elizabeth Warren, and Joe Biden followed, each receiving 12, 8, and 6 delegates respectively.  This was considered a big loss for former Vice President Joe Biden; however, the race has just begun and there’s a long way to go.  This week, voters will go to the polls in New Hampshire for the first primary of election season.  Buttigieg and Sanders will look to continue the momentum while Biden tries to jump back into the race. (Michael Bloomberg is also running for the democratic nomination; however, he has not been a factor yet).

Beginning of month data came in better than expected, for the most part.  Global PMIs were revised higher and US and Canadian payroll data was also better than expected.  The only downfall was Industrial Production today out of some European economies (Germany in particular).   The second week of the month typically sees a slowdown in data releases.  Expected economic highlights are as follows: 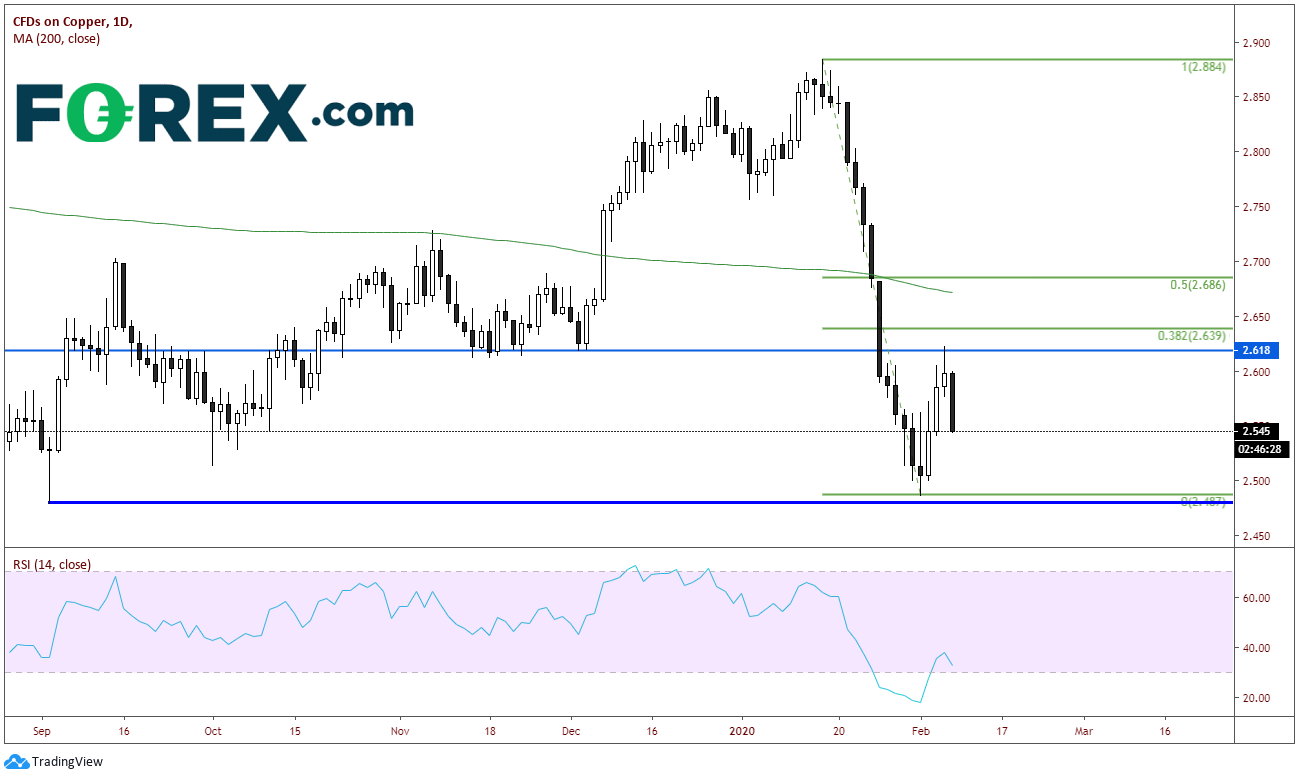 Earlier this week, we discussed how copper was down an unprecedented 13 days in a row before bouncing with risk.  After testing stops below 2.50, copper bounced into horizontal resistance, however failed from taking out the 38.2% retracement from the highs of January 16th (which was one day after the US-China Phase One trade deal was signed) to the February 3rd lows.  In doing so, the base metal formed a shooting star candle, which is a one candlestick reversal formation.  This also allowed for the RSI to unwind and move back into neutral territory.  However, price today put in a long black bearish candle from 2.598 down to 2.544.  If copper trades below 2.480, it has room to run!