The week ahead look set to be somewhat similar to this week, with plenty of economic data but few that could potentially move the markets.

The week ahead look set to be somewhat similar to this week, with plenty of economic data but few that could potentially move the markets. There are no major central bank policy meetings and the US will be on holiday on Thursday in observance of Thanksgiving. So, incoming US-China trade-related headlines are likely to be the major driver behind the markets. But after six weeks of solid gains, the S&P 500 looked set to close this week lower – barring an unexpected late-day rally on Wall Street on Friday. A weak finish to end the week may induce further profit-taking and short-selling in early next week. More on that later, but first here is what’s on the agenda for next week:

As per above, there will be plenty of Eurozone data next week, most notably from Germany. The Eurozone’s largest economy has performed very poor in recent quarters, partly because of concerns over global demand amid the US-China trade spat. Underscoring these worries, German manufacturing PMI has remained below the boom/bust level of 50.0 for eleven consecutive months, though it has improved slightly to 43.8 from 42.1 in October. However, services growth has now also started to slow down judging by the sector’s PMI readings. With Germany struggling, the Eurozone Manufacturing PMI has remained in the contraction territory for the tenth consecutive month, while the Services PMI has fallen to a ten-month low (although at 51.5 still in expansion). If incoming data releases continue to paint a bearish picture, then Christine Lagarde and her ECB colleagues may have to step up bond purchases or cut interest rates further into negative to support the flagging Eurozone economy.  So, watch next week’s Eurozone data closely if you trade the euro or European stocks.

Underscoring worries over the global economy, the latest Japanese PMI data that was released on Friday pointed to stagnant business conditions in November, increasing the risks that the economy may contract in the fourth quarter. There was a slight rebound in services activity, although this was not strong enough to offset the continued manufacturing downturn. On top of this, we have seen continued falls in Japanese exports over the past several months, suggesting weaker global demand. If the trend of weakening data continues for the world’s third largest economy, then the Bank of Japan may well have to further increase its already large stimulus package at some point. So, watch out for the data dump on Friday from Japan.

Meanwhile, the situation in the US, the world’s largest economy, is not too bad judging by this week’s not-so-significant data releases. The Markit Manufacturing PMI, for example, improved to its best level since April as new orders jumped and production hit a 10-month high. But if incoming data were to deteriorate in the US, then recession concerns could come to the forefront. While there isn’t a lot in terms of key US data next week, we do have some fairly important macro pointers to look forward to next week, especially on Wednesday (see the data highlights above).

Brexit-hit UK economy continues to weaken ahead of elections

If the Bank of England were voting for a rate change today, this morning’s disappointing UK PMI data may have encouraged one or two more within the Monetary Policy Committee to vote for an 'insurance' rate cut. However, the BoE’s next policy meeting is on December 19, several days after the general election on December 12. So, it remains to be seen whether the BoE will actually cut interest rates given that the outcome of the election could have important implications in so far as Brexit is concerned. Indeed, the PMI data tends to be sensitive to Brexit uncertainty. Thus, if there is more certainty about the direction of Brexit post elections then the PMI numbers could rebound quickly.  In other words, the pound may have overreacted to today’s disappointing data and could regain its poise, especially if the business-friendly Conservatives gain further ground in the polls. If you trade sterling, watch the polls closely next week, for there isn’t a lot in the way of UK data.

As we have been banging on about a possible correction in the markets – for example in the previous Week Ahead report HERE – the rally on Wall Street faded this week and the major indices looked like would end with red candles on their weekly charts. We think some losses could be on the way in early next week. After all, much of the trade-related optimism is already priced in given the sharp gains on Wall Street over the past several weeks. Even if the two sides were to agree on some sort of a phase one deal at some point down the line, the potential upside move for stocks could be limited anyway. But there are a few doubts over the ability of the US and China to agree to a phase one trade deal before the year is out. The latest concern is that the decision by the US Senate to pass a bill supporting the pro-Democracy protesters in Hong Kong. This has aggravated an already fragile US–China relationship.

However, on Friday Trump tried to play down the impact this may have on their trade talks. He said: "we have to stand with Hong Kong but I'm also standing with President Xi." He later added that trade deal with China is “coming along very well.” Yet the markets’ reaction, although positive, was not as jubilant as before. It looks like investors are tired of the rhetoric and want to see action. At some point, you have to say enough is enough, because the current state of the economy or company earnings do not support US stock prices at these levels. Indeed, according to Goldman Sachs analysts, the only thing holding the stock markets up is central banks. "With S&P 500 earnings on track for roughly zero growth from this time last year, solid returns likely would not have been possible without central bank support." Central bank easing accounts "for almost all of the price return since the start of the year." 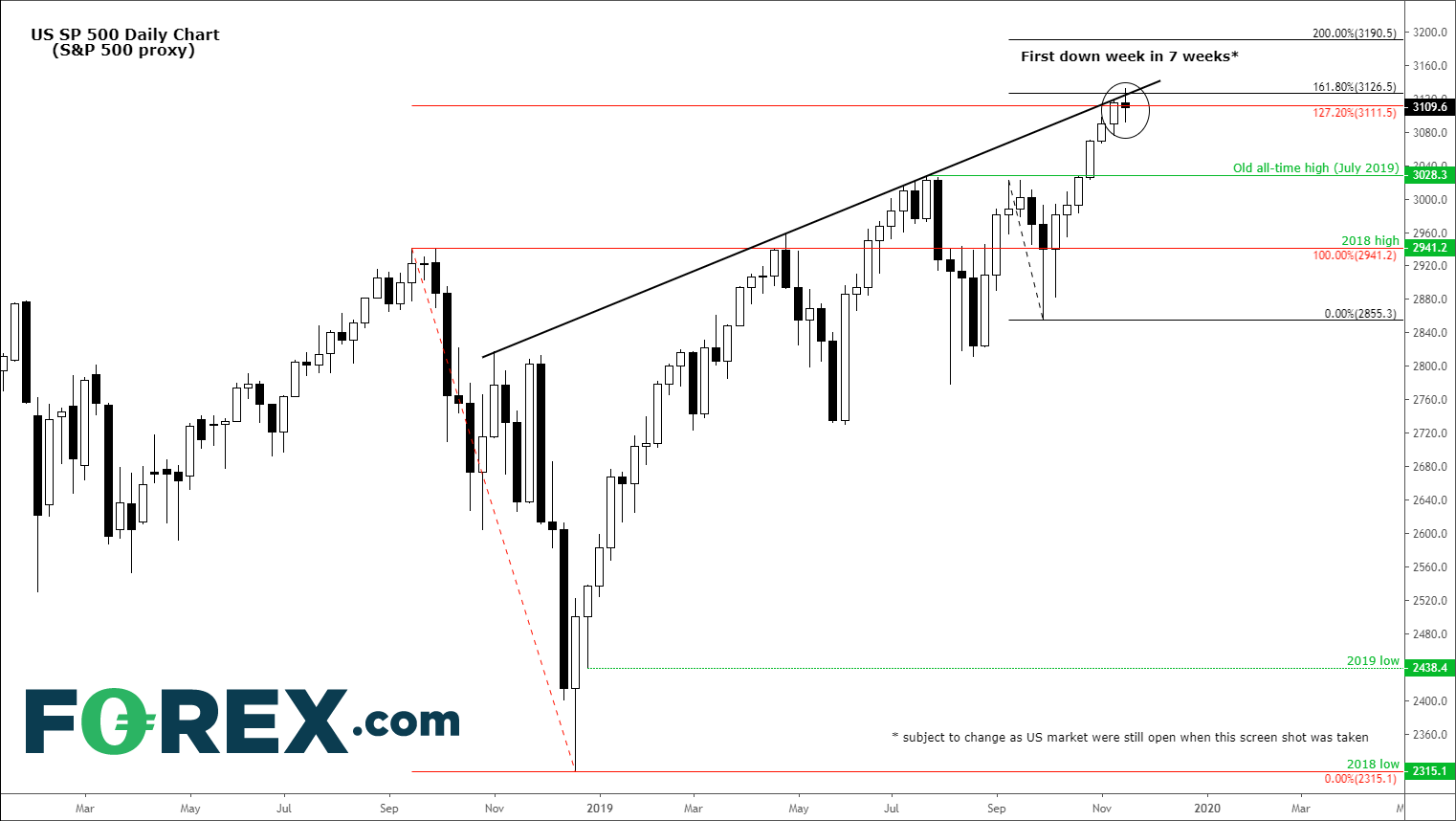 The S&P has hit some resistance after rising to new record highs for several consecutive weeks. The index looked set to close the week lower for the first time in 7 weeks, barring a late rally. So far, the weakness looks to be driven by profit-taking as the selling pressure has been weak. Could that change next week? Well, trend reversals almost always start mainly by profit-taking. But technically, the index does look overbought even on the weekly time frame. So, a pullback should not come as surprise especially with the S&P testing the rising trend line and some Fibonacci extension levels (see the chart).