Week Ahead: Stocks, Yen Crosses in Focus as Yields Surge

With the economic calendar being quiet, you’d think the markets won’t move much. Well, this is not necessarily true.

So, Friday’s US jobs report missed on the headline front and the dollar’s immediate response was to go down. The weaker employment reading was in part due to hurricane Florence. However, the non-farm payrolls report didn’t trigger a massive move by any means as the headline disappointment was more than made up for with the upward revisions for the previous months, as my colleague Matt Weller highlighted in his NFP recap earlier HERE. Meanwhile the unemployment rate dropped to just 3.7%, a 49-year low, and crucially average hourly earnings rose 0.3% m/m, as expected, causing the year-over-year growth rate in wages to tick down to 2.8%. So, overall, the jobs report wasn’t too bad, but not great either. So the initial dollar selling stalled as the session wore on.

Heading into next week, the economic calendar is quite quiet. Monday, in particular, will be a snoozer in terms of data with both North American nations and Japan out on holidays, although we will have some European data on the agenda (e.g. Eurozone Sentix Investor Confidence and German Industrial Production). And for the rest of the week, too, we will only have a handful of potentially market-moving data releases to look forward to. These include, among others, UK GDP and manufacturing production on Wednesday, and European Central Bank’s meeting accounts and US Consumer Price Index (CPI) on Thursday. The UK GDP is expected to have expanded 0.1% month-over-month in August after growing by 0.3% m/m in July. Manufacturing production is expected to have rebounded by 0.1% on the same month after its unexpected fall of 0.2% in July. And as far as US CPI is concerned, well this is seen rising 0.2% on both headline and core fronts.

With the economic calendar being quiet, you’d think the markets won’t move much. Well, this is not necessarily true. There could be unexpected geopolitical developments, for example, which could see the markets move sharply in one or the other direction. But aside from that, the key focus will remain on the rising yields, after government bond prices got absolutely hammered in recent days, leading to a stock market sell-off. In essence, it is the unwinding of the massive bond buying programmes from major central banks, led by the US where the Federal Reserve is already on a hiking cycle, which is unnerving investors. But we are also seeing bonds fall and yields rise in Europe, with German and UK 10-year bond yields hitting their best levels since May this week.

Clearly market participants are growing optimistic about the health of the global economy and therefore expect monetary conditions to tighten further. The ECB has already started to taper its bond buying programme and plans to end it in December, before raising interest rates at some point in 2019 - probably after the summer. In the UK, the Bank of England has already raised rates from the post-financial crisis record lows and is expected to tighten its belt further in the upcoming months, especially if there is a breakthrough in Brexit stablemate. Elsewhere, the Bank of Canada is set to hike rates again at its next meeting owing to improving conditions there and after they reached a new trade deal with the US and Mexico.

The rally in bond yields, if sustained, could have major implications on financial markets going forward. After all, it was during all those years post the financial crisis when they were falling which led to investors flocking to the higher-yielding stock markets in the first place. Now that bond yields are rising, this is eroding the attractiveness of equities on a relative basis. Thus, we could see funds flowing out of equities, leading to a correction for major global indices soon. Meanwhile the rising yields in developed economies could potentially re-ignite the emerging market currency crisis. This is an additional risk factor for equities that needs to be taken into account.

However it is not all doom and gloom out there. Higher yields are seen as being positive for banking stocks. So we may see financial do much better than was the case previously, once things calm down. Also, the third quarter reporting season is set to unofficially start from next week, which means there’s potential for equities to rise in the event we see more beats than misses.

As far as the FX markets are concerned, we think that yen crosses should garner a lot of attention next week as investors react to the risk-on-risk-off situation in the equity markets. If stocks fall further then the likes of the EUR/JPY, AUD/JPY and NZD/JPY could come under increased pressure. We are not too sure about the majors, though, as it is not just in the US that yields are on the rise. Still, the EUR/USD could be in real trouble if it ends the week below 1.1530 key support. 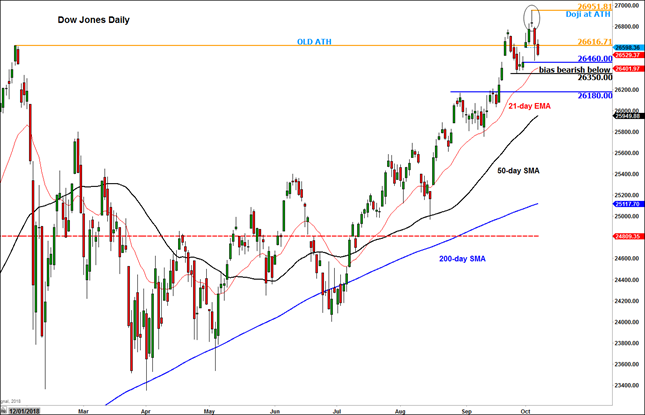